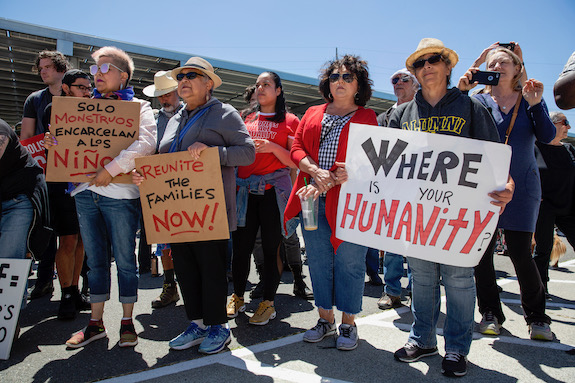 02 Aug She Got Her Baby Back From Immigration Foster Care. Now, What?

Posted at 19:15h in Immigration, Women by RPadmin 0 Comments

Above: Protesters carried signs as they listened to several speakers during the Detention Center Day of Action protest at the West County Detention Facility in Richmond, Calif. on Tuesday, June 26, 2018.

HOUSTON — Sendy Karina Ferrera Amaya clutched a stuffed unicorn outside the airport arrival gate Saturday morning, as her fiancé Juan Barrera Bucio paced back and forth.

He spotted the baby first.

“There’s someone coming with a little girl,” he said. “Yes, it’s her.”

It had been 103 days since Ferrera’s 1-year-old daughter Liah landed in foster care for immigrant children, separated under the Trump administration’s “zero tolerance” policy after crossing the border with her uncle. Ferrera had left Honduras months earlier, when Liah was too small to travel. Ferrera made it into the U.S. undetected, and the plan was for her brother to do the same with Liah, but he was caught and deported. Then the Department of Health and Human Services had to be convinced to give the baby back to Ferrera.

The department has argued that stringent vetting is necessary to ensure children vulnerable to human trafficking are kept safe. But for Ferrera, the process felt opaque, full of never-ending questions. After a background check that included two home studies and a DNA test — and anguish about whether this day would come at all — Ferrera got word on Friday:

She needed to pay for two plane tickets, one for her daughter, who was living at an undisclosed location in Texas, and one for a caretaker who would accompany her to Houston. Ferrera’s fiancé raced to wire the $895. Then, just after 3 a.m. the following morning, they began the drive from their trailer home in Sulphur, Louisiana, to the George Bush Intercontinental Airport.

Four hours later, there Liah was, wrapped in a pink blanket, dozing in her caretaker’s arms. The baby stirred only for a moment when her tearful mother swept her up and kissed her, inhaling deeply. Then, Liah’s eyes rolled shut, and she melted into Ferrera’s shoulder, fast asleep.

The caretaker had Ferrera sign forms. She handed over two envelopes full of records, a black gym bag and a diaper bag. It all took five minutes.

Ferrera had so many questions — about where her daughter had spent the past three months and what would happen next.

As the little family turned to collect themselves, they realized the caseworker was gone.

Liah slept for the entire two-hour ride back to Sulphur, awaking just as they rolled up to their trailer. “This is your house,” Ferrera told her. “You’re home.” Liah toddled inside and began to explore, opening cabinets and looking in the trash can. Soon, the living room was scattered with all the toys Ferrera had gathered in the months of waiting.

Ferrera tried to piece together what she could about her daughter’s time in foster care. She didn’t know what kind of diapers Liah wore or when she slept or how she spent her days. She plopped the bags down and began to go through them.

She found the beat-up white sandals Liah had worn on the smuggler’s journey in April; they looked too small for her now.

Along with diapers and a pile of new clothes were jars of baby food, applesauce, containers of soy milk, a Nutri-Grain bar — a hint of what Liah liked to eat. Another bag contained Tylenol and Benadryl.

She paged through the documents from the envelopes, which included intake forms and medical records. “I don’t understand,” she said, shaking her head. “It’s in English.”

Border Patrol agents had conducted a medical screening when they first processed Liah, finding her “mentally alert” and exhibiting “appropriate conduct.” Reports chronicled seven doctor visits; the first noted Liah had arrived at the shelter with tick bites behind her ears. Over the months, she’d also had a bad case of diaper rash, a cold and diarrhea. She’d gotten nine vaccines. But Ferrera wouldn’t understand any of it until her fiancé could translate for her.

Ferrera made note of the ways her daughter had grown. She had 9 teeth, 5 more than when she left Honduras. Her toenails were long, so she pulled out the clippers. Liah was also more active than Ferrera had seen in the 20-minute video calls the shelter allowed once a week. She loved to flutter her lips, give high-fives and dance, and could touch her nose when prompted.

The only time she fussed was when Ferrera left a room without her.

That night, after Liah was tucked into her crib, Ferrera curled up on a mattress in the nursery and went to sleep beside her.

The next day, Ferrera and her fiancé strapped Liah into her car seat and headed out for a drive.

Their minds were on the challenges ahead.

“We’ll need to get a lawyer,” Barrera said.

In Liah’s file, there was a Warrant for Arrest and a Notice to Appear. “You are an alien present in the United States without being admitted or paroled,” said the notice addressed to the baby. Liah’s first court date was coming up, and Ferrera would need to get it moved from Texas to Louisiana. In an envelope, the case workers had included a list of pro-bono lawyers.

Ferrera thought things would work out.

Barrera wasn’t so sure. Liah would probably need to file an asylum claim, and he knew the administration was making it harder to get accepted. “I read a lot of news, and they say they are rejecting 90 percent of all the cases,” he said.

“But Juan, that’s not until she goes to court,” Ferrera interrupted. Her friends had told her that it could take years to get a final decision from immigration court. Surely by then, they could find a solution to keep Liah in the country legally.

“I know, I know,” Barrera sighed, “but now, Donald Trump is making it so that everything happens faster.”

Then, there was the question of Ferrera’s status.

She was undocumented, and the government knew it. As ProPublica has reported, Immigration and Customs Enforcement can now access the information family members submit for the purpose of retrieving kids from the foster system and use it to deport people.

A friend had joked that he wouldn’t come to their house to meet Liah because they were on ICE’s radar. He had been staying with them back in April, but as soon as Liah and her uncle were caught, he packed up and stayed at a hotel.

Ferrera tried to push those thoughts from her mind as she talked about the firsts she couldn’t wait to experience: Liah’s first trip to the beach, to the pool, to the parks around Lake Charles. But she couldn’t deny the possibility that the time to execute this American bucket list could end. “I hope they don’t separate us from her,” she said.

On this Sunday, they would settle for a modest agenda:

Head to Walmart to buy groceries and clothes.