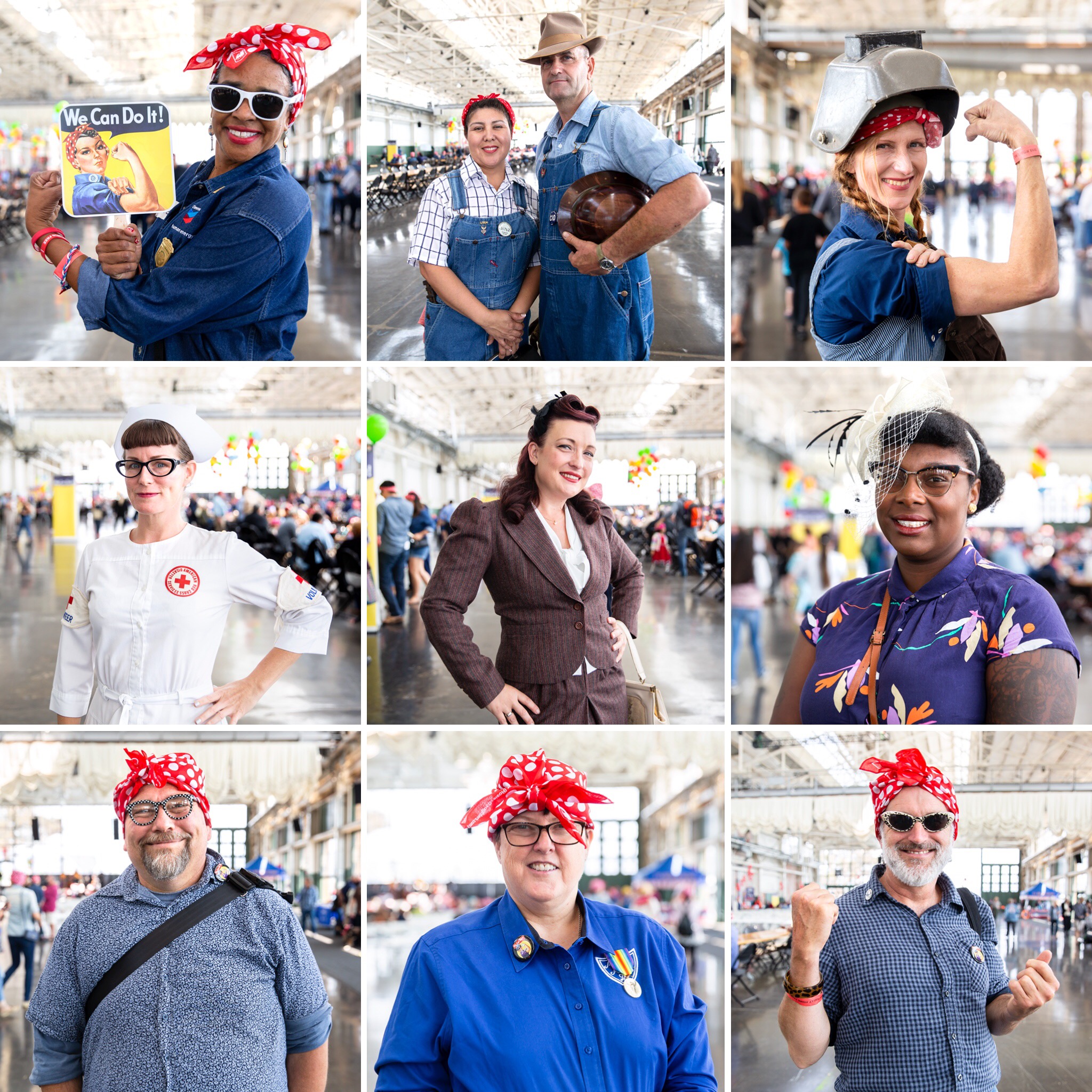 20 Aug The Many Faces of Rosie the Riveter

Posted at 06:35h in History, News, Women by RPadmin 0 Comments 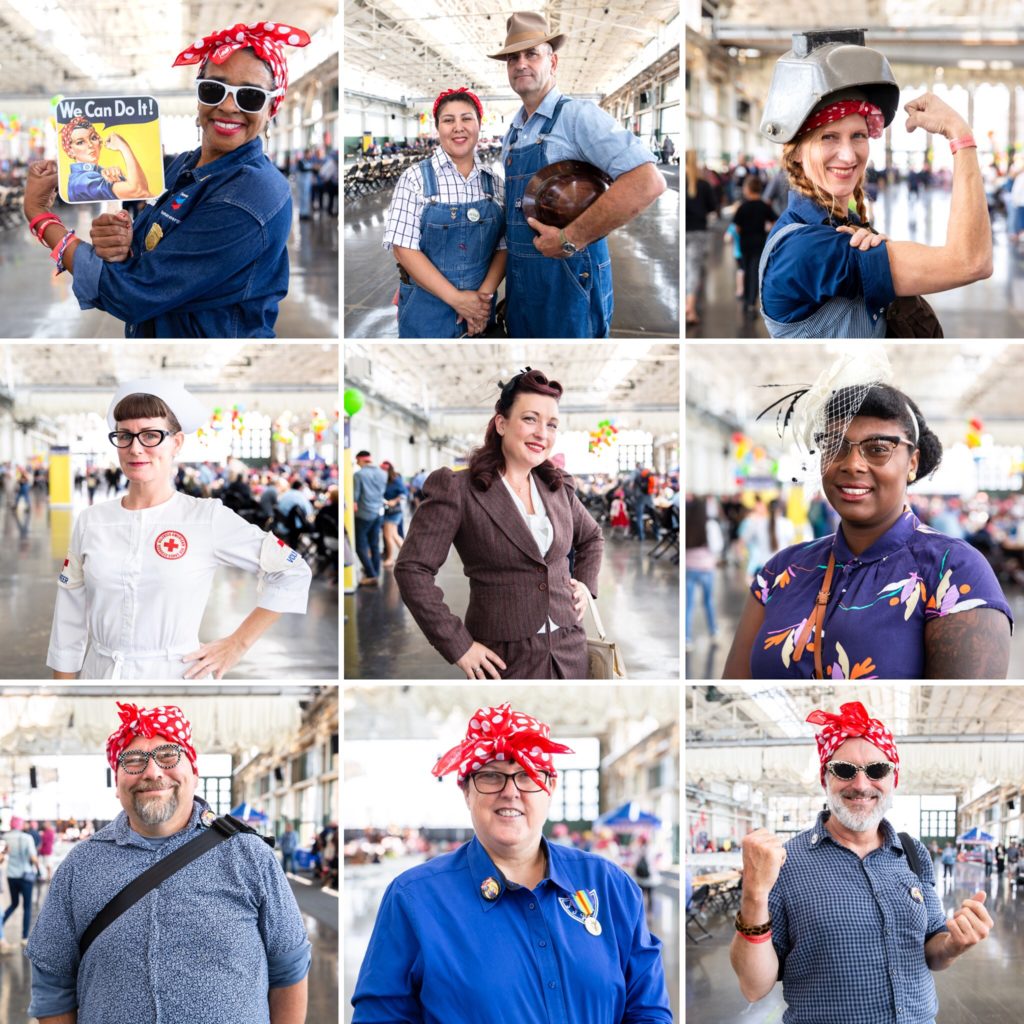 Raynell Crews-Gamez says Rosie the Riveter is every woman.

“She represents courage and sacrifice in the time of adversity,” she said.

In previous years, the event tried to break a Guinness world record for most Rosies in one place, but this year, the rally committee encouraged attendees to show off their own take on Rosie.

“We decided to do a rally where people can dress as Rosie and really show their own ‘We Can Do It’ attitude, really use the original Rosie’s as inspiration for this next generation,” Tom Leatherman, the superintendent at the Rosie the Riveter World War II Home Front National Historical Park, said.

Showing support for the “Rosies” across all communities, ethnicities and professions during that time period, guests came dressed in everything from the traditional bandana and polka dot shirt Rosie to vintage dresses and time-piece nurses.

Amber Robinson attended the event dressed in a 1940’s pantsuit, stockings and oxford heels, not unlike something her grandmother would have worn at the time. She says that Rosie represents the growth of women into the workplace. Robinson looks back at the Rosies of that generation in awe for the fact that they paved the way for future generations of working women.

“Rosie looks like so many things because she really encompassed all of the women of that time,” Robinson said.

For Angelina Aguilar and John Fornbacher, it wasn’t as much about representing Rosie, specifically, but rather all the workers at that time, women and men alike. Aguilar and Fornbacher attended the rally dressed in clothes commonly worn by male and female ship workers. That included Aguilar dawning a man’s button up shirt and overalls.

“They didn’t always wear their own clothes. Sometimes they would wear their husband’s clothes,” Aguilar said.

For both Aguilar and Fornbacher the meaning of a Rosie is a patriotic person who wants to do her part on the home front and learning a little independence as well.

“Anybody at any age could represent and support in any way possible, the women did it this way, and they did it well,” Aguilar said.

For many, Rosie the Riveter represents the ability for them to work in fields that aren’t commonly filled by women.

Lucia Watson, a female refinery worker for Chevron, gives thanks to the Rosies for making it possible for her to do the job she has today.

“To me, [Rosie is] the embodiment of the women from the 1940s to the current day,” Watson said.

Watson sees the Rosies as more than a single woman in a single generation, but every generation of women.

For Debra Buckley, Rosie the Riveter looks like her grandmother, who was a welder in the shipyards of Richmond. Now, Buckley herself follows suit as a unionized plumber.

Thanks to her grandmother’s work and fellow Rosies, women were accepted into the workers unions and childcare was created, allowing mothers to work outside the home.

“It kind of changed the role that women played in this country,” Buckley said.

Katie Estupinan, dressed in a vintage 1940’s dress and oxford heels, says Rosie looks like herself. Working as an apprentice carpenter with her father in Sonoma County, Estupinan has never agreed with the stereotype that women could only do certain jobs.

“If it wasn’t for the Rosies here, I may not even be able to do what I’m doing now,” she said.

Many see Rosie as a symbol of women’s empowerment and the start of the women’s movement.

A man who went by the name Pixie, added his own touch to the trademark Rosie outfit, including gemstone cat earrings and a leopard print pair of sunglasses.

“To me, Rosie is about empowerment and diversity,” he said.

“Rosie is a time where women redefined their roles in society by rising to a challenge and showing that they can do things that people didn’t expect them to do,” he said.

Powell admires the strength of the original Rosies, as well as the women of the current day showing the same strength in women’s rights and the #MeToo movement.

Through it all, generations of women and men alike see strength and courage in the image of Rosie the Riveter.

“Rosie’s a whole bunch of different nationalities and a whole bunch of very powerful women that came together,” Robin Mills said. “They are very strong people, very diverse, and in difficult situations.”

Marsha Mather-Thrift, executive director of the Rosie the Riveter Trust, hopes that their effort with the annual rally alongside the national parks daily work will help to encourage future generations to step forward and know their own strength.

“I think a lot of people, especially younger people, have no idea what these women did,” she said, “and they don’t realize how powerful they can be.”