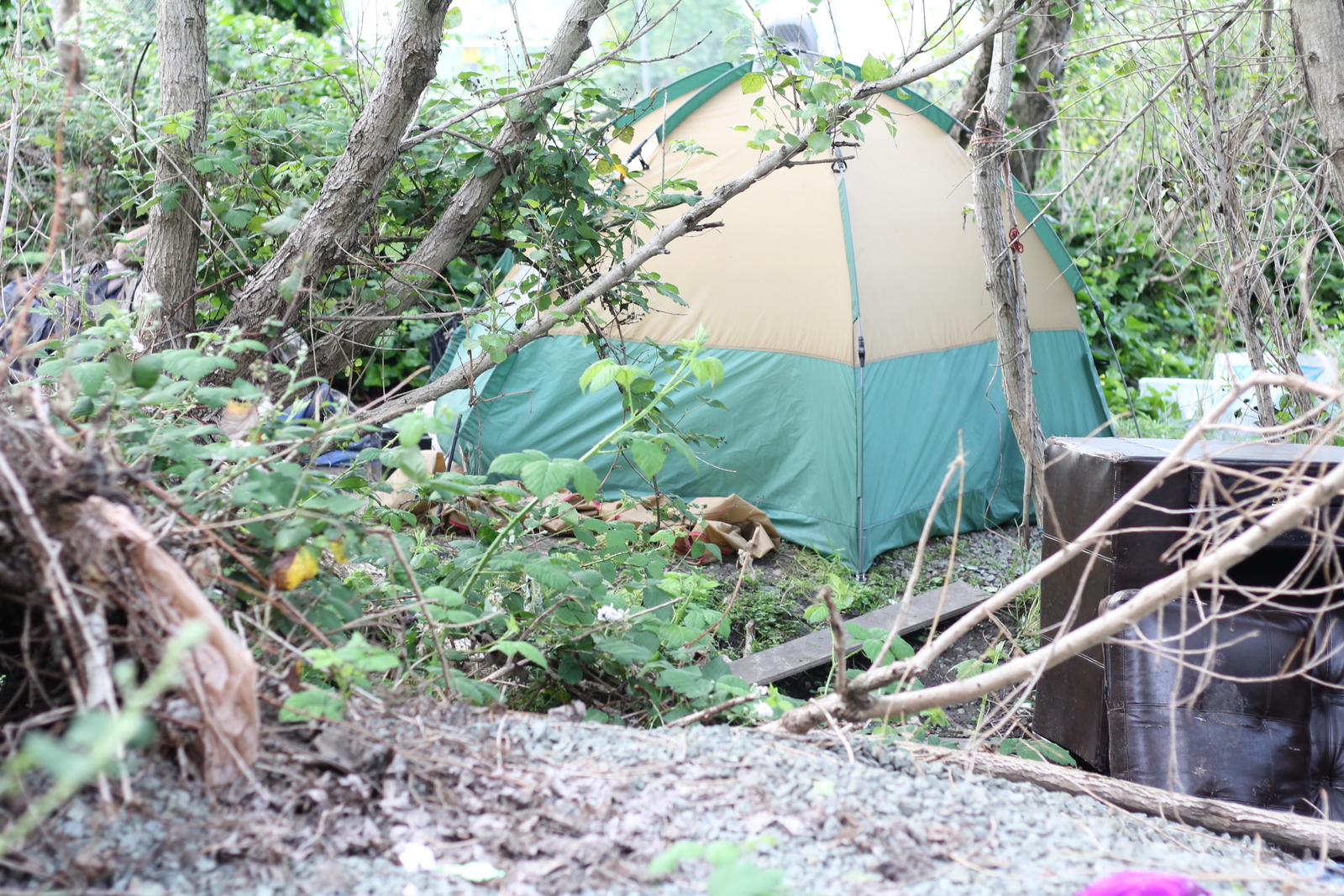 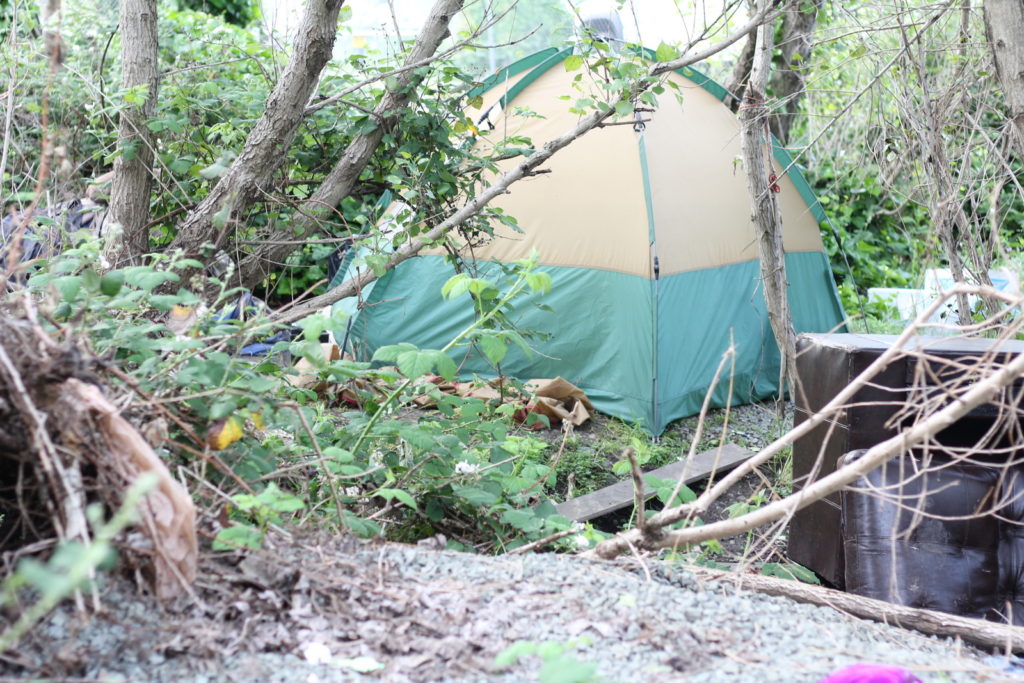 For the past two years, the half-mile stretch of railroad along Carlson Boulevard has been flanked by bushes, tents and the belongings of people who lived along the train tracks. Along the corridor, one campsite stands out.

At the entrance sat a small rock with “welcome to my garden” carved on it, and two garbage containers: one filled with trash, the other with cans, bottles and other recyclables. Encampment resident Shay says that these touches help her maintain dignity, despite her living situation.

She’s been homeless for over three years and spent the majority of that time in San Francisco, where she says volunteers visited homeless folks and gave them food and other donations.

“It was better. They used to just give us stuff, just because we were homeless,” Shay said. “I thought that was really nice. I started having faith in humanity before I realized it was probably a tax write-off.”

She’s been at the railroad encampment for nine months, and, in that time, she said she’s struggled to meet her basic needs, and keep the “wood rats” away from her food.

“It’s not that great, not out here,” she said. “We have to go really far to get water. We have to get it from the fire station. You can’t really start fires to cook because the fire department will come.”

“And then the rat problem,” Shay continued. “I just put out D-Con, peppermint oil, and I keep all my garbage up here. I keep my food in my cooler.”

Shay is one of over 2,200 people who are homeless in Contra Costa County, according to the 2018 Point in Time Count conducted by members of the county’s homelessness outreach team, known as CORE. In May 2017, a coalition of city staff, officials and community members came together to form the city’s Homeless Task Force. A year later, the group recommended that the city designate homelessness as a “public health crisis” and created a list of suggestions to thoroughly address the issue.

The task force was supposed to disband this June, but one of the recommendations renewed the group and allows them to continue organizing for another year. They also suggested sensitivity trainings for city staffers who interact with homeless populations, as well as forming a partnership with the Contra Costa County Health and Housing Services to fund mobile outreach teams that would travel throughout the city.

One of the most expensive recommendations focused on investing in housing for low- and no-income residents. A part of that investment would be transforming blighted properties into city-sanctioned encampments for homeless residents.

Melvin Willis, vice mayor and task force co-chair, says his role is to take whatever comes out of the conversations of the homeless task force to city council.

“The goal is to have these camps be a place where it’s not a permanent solution for them,” he said. “We’re trying to transition people out of homelessness and into housing.”

“We need to provide services that lessen the public health crisis,” Daniel Barth, a task force member and homeless services advocate, said. “We do so by providing resources, not just kicking people [around].”

The encampment where Shay and at least 15 other campers were living was abated and the campers dispersed, making it difficult for outreach volunteers to follow up on health services and housing and employment opportunities.

Funds to lease a piece of land and set up the camp’s infrastructure will come from a variety of sources, including $300,000 in “in lieu” fees that are paid by housing developers who do not offer affordable and/or low-income units. Task force members and activists are also seeking charitable donations and grants to subsidize any expenses that the in lieu fees may not cover.

Instead of building more units to support low-income renters, developers pay the cost of building such spaces directly to the city of Richmond. City officials also passed a vacant property tax to support services for homeless folks and to address blight and illegal dumping.

“We have to be careful, legally. In lieu fees are regulated in a very strict way,” city council and taskforce member Jael Myrick said. “We have to be creative with money ‘cause, it will probably will cost more than $300,000.”

One stipulation of the envisioned encampment is that it cannot be on land that is owned by the city because it presents a legal liability. So, taskforce members are seeking out a private property owner who is wiling to lease a parcel of land large enough to support the campsite.

Outside of the financial support from the city or county, the success of the “safe camps” will depend on cooperation from residents who live in the neighboring communities and throughout Richmond.

“If we don’t litter, then [the authorities] don’t really bother us too much,” Shay said. “When you make it hecka dirty, people complain, and they have every right to because they don’t want their neighborhood to have an eyesore.”

Barth says that a partnership between neighbors and campers can help dispel stereotypes surrounding homeless folks and can create a stronger sense of accountability among the folks who will live in these camps.

“If we can bring some light into a situation, like making a more visible encampment where people have to be accountable to the neighbors,” Barth said, “then maybe [they will be] integrated better with that neighborhood because they don’t have to hide. If they’re not hiding, the behaviors that would be hidden are toned down.”