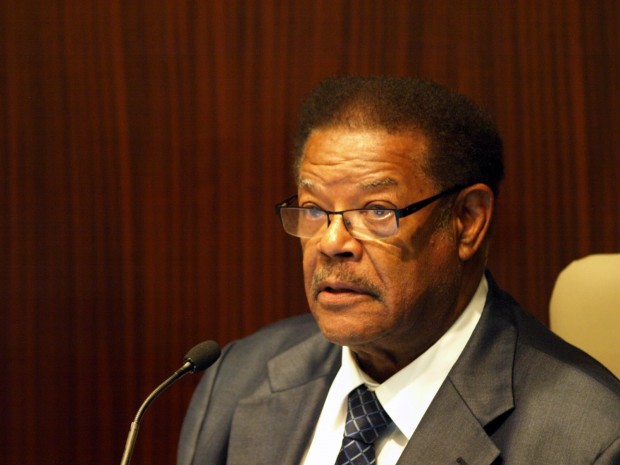 Posted at 20:47h in People, Politics by RPadmin 0 Comments

Nat Bates, 86, is a former two-time mayor and eight-term city councilmember in Richmond seeking a seat on the city council once again.

Born in Texas, and raised in Richmond, he is also an Army veteran and a former probation officer.

Bates sat down with Richmond Pulse to discuss economic revival, why the city shouldn’t run a hospital, and why African Americans are leaving the Bay Area.

Nat Bates: Richmond has been my home since I was a small kid, and my mother migrated from Texas along with a lot of other minorities and individuals during the shipyard days, World War II. Richmond has given me so much, and I’ve been blessed with so much. I love this city. It’s my home.

I have so many friends out there, the senior citizens in particular, that appreciate my fight for them, and for the city of Richmond. God has blessed me with good health. I’ve got a strong mind. I’m financially secure. And I just want to continue to give, as long as the people want me to be their public servant.

If I live another 200 years, I could never give back what I have received from this city.

NB: My top priority is a balanced budget. It’s no different than a family household: you’ve got to make sure that the revenue is there for your expenditures.

The second thing is public safety. If you don’t have a safe city, citizens are in jeopardy, and people will not bring their businesses here. When I was on the council, we had 200 workforce police officers. Today, they have 178 workforce and 20 of those positions are unfilled. Another 20 individuals are on leave. So they’re operating with a low number of police officers.

You’re gonna find the city going back to the old days where Richmond was considered one of the highest crime cities in the nation, and you’ve got to fix that. You gotta bring in economic development to be able to pay the men in service.

We’re losing money left and right, and people don’t seem to be aware of that. Economic development is gonna be the catalyst to pay for not only public safety but other services.

NB: Tom Butt and I were on the council when we bought Point Molate for one dollar. It was a Dellums deal, and he mandated was that any use of those facilities had to be directed toward two concerns: economic development and job creation.

The court as already made a decision and mandated certain things. Housing is gonna create employment for the carpenters and labor union, which is good. But once the homes are built, those jobs disappear. Economic development will only be there for a short period of time. The homes themselves are gonna be upscale, and the property tax is gonna add some economic development to the city.

Hopefully that stimulus will create economic development like restaurants, maybe some shops, and a few other amenities. It requires creative planning, but you can’t do that if your city council doesn’t treat your small business with respect.

NB: I think it’s important to remember that hospitals are not a city function. There’s not one city that I know in the Bay Area that controls a hospital. That is county function. We cannot, as a city, financially assume the liability of bringing a hospital in the municipality.

Oakland doesn’t do it. San Francisco doesn’t do it. We can lend all the expertise that we’ve got, but somebody needs to be reminded that that is not a city function.

There are certain responsibilities we have as a municipality, and, if someone reads the charter, they will understand we cannot do everything that the citizenry wants us to do, especially in those areas where they have their own elected body in their jurisdictional authority.

NB: It’s sad to say, Richmond is changing. At one point, the African American community was about 50 percent. Of the nine city council members, we had seven on the city council.

In 10 years, I see Richmond becoming a predominantly Caucasian and Latino community. Most people don’t realize that the African American community is shrinking dramatically for several reasons. One is that a lot of seniors are dying off, and the siblings want their piece of the action, so they’re liquidating their homes. The first person in line to purchase the home from the African American family is the Latinos.

The second thing that’s happening is that African American families are retiring. The house is worth half a million dollars. They’re selling predominantly to the Latino community. And they’re taking their money, and going back to Texas, Louisiana, Mississippi, Alabama, and they’re buying acres of land. They go back with their liquidation assets, and they build a new home. They put a Lexus or Mercedes in the garage.

And that’s what’s happening to the African American community throughout the Bay Area.