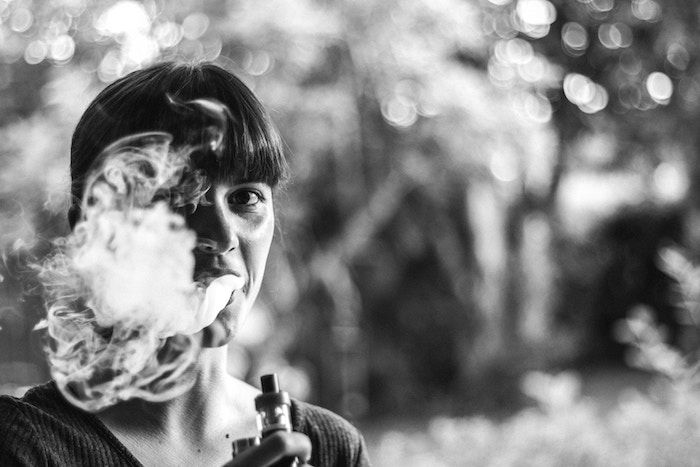 02 Oct Up in Smoke: My Stint at Vaping

Posted at 21:27h in Health, Youth by RPadmin 0 Comments

Calling teen vaping an epidemic, the U.S. Food and Drug Administration is threatening to prohibit the sales of electronic cigarettes if companies won’t do more to keep them away from teenagers.

I am one of those teens. The first time I smoked an e-cigarette, I was a senior in high school. For me the progression from a hit here and there to a daily habit was fast – once I got my own.

The most common type of e-cigarette among teens is the Juul, a brand of e-cigarette. Its main ingredient is nicotine salts, which exists in leaf-based tobacco. Each Juul pod contains the same amount of nicotine as a whole pack of cigarettes. The device itself is usually $50, and the pods sell for about $10.

At San Rafael High, where I went to school, students would often go to the bathroom, during class or breaks, to get a fix of their Juul. Those who didn’t have one would meet up with someone in the bathroom who did. Friends of mine that had Juuls were constantly asking people they knew if they had pods that they could buy. (I never knew how minors were able to get the pods.)

Sometimes I would take a couple of hits, but the thought of getting my own never really crossed my mind. That was until a friend gave me his because he was over it. I never thought I’d use it as much as I did.

By taking it, I knew I made a bad choice.

Then, I would crave the menthol flavor it would leave lingering in my mouth.

It quickly became a part of my daily routine. It got to the point to where I would sometimes finish a pod in a day – roughly the equivalent of a pack of cigarettes. Even then I didn’t stop myself. I knew I had to stop sometime soon because I could feel myself getting addicted to it.

Though I had to contain my need to Juul when I was in school and at home, I didn’t do it well.

Like a lot of kids at school, I would go to the bathroom for a fix. Later, when I was at home, I would wait for my parents to fall asleep. Or, I would sometimes Juul in my room during the afternoon, knowing that my parents could walk in at any moment. But like any rebellious teen, I didn’t really care.

While I was Juuling, I was skipping meals throughout the day, drinking more coffee than I usually would and losing weight. People around me noticed and in time I started to notice significant differences throughout my body.

That’s when it really hit me—I had to stop. Immediately.

So, I gave the Juul away to someone who had one before, lost it, and wanted a new one but didn’t have the money.

I still craved the minty taste it would leave in my mouth but switching to mint-flavored gum provided the same effect.

Surprisingly, stopping Juuling wasn’t hard for me. Now, the only hard part is when I’m around people who have them and they ask me if I want a hit. I say no because it’s easy to slip back into the same cycle.

It’s been five months since I Juuled.

If you’re curious about it, based on my experience, I recommend you not try it. I’m not going to tell you what you should and should not put into your body, but if you do decide to try it and happen to like it, just know it’s easier to stop sooner than later. I’m glad I did.

Editor’s Note: At the author’s request Richmond Pulse is keeping this commentary anonymous.