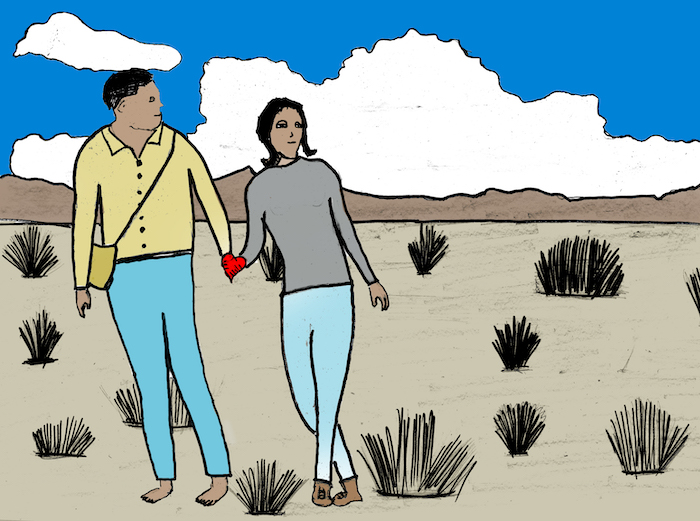 20 Oct My Parents’ Love Survived the Desert, But Now It’s Fading Away

Posted at 21:01h in Immigration by RPadmin 0 Comments

My parents’ love started in Guatemala, grew in Mexico and seems to be ending here in the U.S.

My mother and father have separated. Two months ago, she and my youngest brother moved out of our home. They now live across the city from me and my dad. They don’t plan to file for divorce because they don’t need it to know they aren’t getting back together.

I realize now how hard it was for them to keep their love alive in an undocumented, economically limited household.

In 2001, my mother and father immigrated to Oakland with my older brother, who moved out on good terms about six months ago; my younger sister, who attends Sonoma State University; my 8-year-old brother; and me.

My parents walked the Texas desert in 1993 while she was pregnant with my older brother. My father gave my mother his shoes because hers were worn out by the trek.

Eventually, they were caught by U.S. Border Patrol and sent back to Mexico. Their journey only made their bond stronger. They tell me stories of being discouraged after being sent back to Mexico, but they kept fighting for the future of their family.

That was not the first time, nor the last, that my mother and father had journeyed together for a better life. They previously made their way through Guatemala and Mexico. They were both born in Guatemala in 1971. My mother started working after she was kicked out of her house at age 9 by her stepmother, who thought my mother took too much of my grandpa’s attention away from her. My father, a second-grade dropout, worked in the cane fields from a young age. When my mother was 17, she got a job in Mexico City as a housemaid. My father had been courting her and was devastated when she left for Mexico. He followed her to express his love. They soon became boyfriend and girlfriend.

Through better or worse, they took care of each other. My mother fell ill in Guatemala while they were staying with my father’s family. The nearest hospital was about 80 miles away. My father carried her to a neighbor’s house about an hour away. There, he borrowed the neighbor’s pickup truck and got my mother to the hospital.

Although in Guatemala and Mexico, my parents were living in poverty, they went out, had friends, had extended family (which we don’t have here in the Bay). Their lives were one.

Now in the U.S., a humble life as undocumented immigrants has always been confined to a routine of work, rest and work again to afford living in the Bay Area. That messed with my parents’ view of life. For them, surviving is triumph.

Living in the U.S. has fostered the same mentality as crossing the desert: just survive. Both my parents have sacrificed so much more than their bodies and time. It has been hard for them to become involved in their community. Work is always on their minds, and money is always needed.

The strain in our household has always been rooted in money. Of course, there were good times, but those seemed to end whenever we ran out of money.

Living our best lives was reserved for the future. Having fun was not a priority. There were, however, plenty of fights and arguments.

I believe my father and mother should have separated a long time ago. One day, my father had all his things in black garbage bags after a week of arguments. My parents talked in the kitchen for hours. After, my dad told me he wasn’t going to leave.

I was sad. I was 12 and didn’t want my parents to live together. I did not know why they fought so much, but I knew they were not going to get better together.

But also, I did not take into account the economic and social burdens that come with separation. I do now. I see why it took so long.

I am my mother’s backbone, and she did not have the older me back then. Even my older brother would not be able to help my mother support herself and help raise two other kids.

Now, my family has two rents to pay, two grocery bills and two utility bills. Although my father and mother have separated physically, they have not separated mentally. They have an 8-year-old-child and a daughter in college that both look to them for support.

So although my parent’s romantic love has ended, I hope that their separation can walk them back to the friendship they once had. I tell my mother that this is like the time they walked the desert and got caught.

The author’s name has been changed to protect his family’s identity.