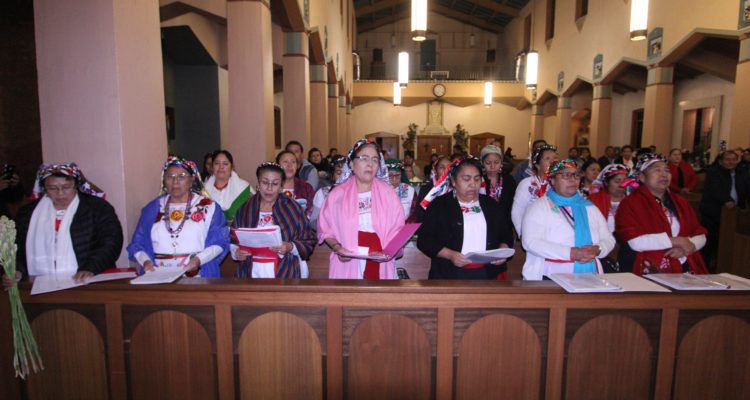 Posted at 19:30h in California by RPadmin 0 Comments

Above: Náhuatl group Nuestra Madre Gudadalupe at service in Our Lady of Lourdes Church in East Los Angeles. Photo courtesy of Fernando Cano.

Walking past Our Lady of Lourdes in East Los Angeles on a Friday evening, you can hear the pounding of drums, the rattling of shell anklets adorning Aztec dancers and the unfamiliar sounds of words sung in harmony to honor ancient gods.

The words may sound foreign to most, with unusual pronunciations. When spoken, Náhuatl, the language of the Aztecs, has a lot of sounds made by the consonants “ch” and “tl” (the t is silent). 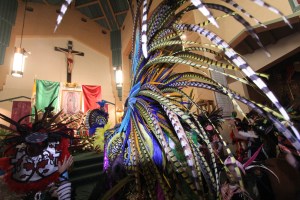 Service with Aztec dancers and Náhuatl singers in Our Lady of Lourdes Church in East Los Angeles. Photo courtesy of Fernando Cano.

In Boyle Heights, 58-year-old Yolanda Martínez helps promote the Náhuatl language through a singing group called Tonantzin Cuelga Chupete in Nahuatl, or Nuestra Madre Guadalupe in Spanish. The group practices at Our Lady of Lourdes on Monday, Wednesday and Friday evenings.

“We started the group four years ago because we wanted there to be songs in Nahuatl,” says Martínez.

About 1.5 million people in the world speak this language, which was once the most dominant and widespread language in Mexico. The Mexican Instituto Nacional de Lenguas Indígenas recognizes 30 individual varieties within the “language group” labeled Náhuatl. Today, it is largely an oral language, and some worry it is not being passed down to younger generations. But there are efforts trying to keep it alive, in Mexico, among local residents and in universities.

Martínez says her grandparents taught her Náhuatl at a young age. She first learned small phrases and eventually was able to translate some Nahuatl to Spanish with her grandparents and family. She never learned how to read or write the language.

She created the singing group to bring back the language her ancestors spoke. Many children accompany their mothers and learn the language through songs. The group is primarily made up of women. 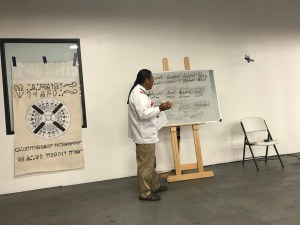 “It’s very important to teach so we don’t lose our roots,” says Sabrina López, a 50-year-old Boyle Heights resident who participates in the group.

Martínez didn’t teach her children how to speak the language, which she now regrets. “That was my biggest mistake,” she says.

Kevin Terraciano, co-chair of the Latin American Graduate Studies Program at UCLA, says this is a common experience with indigenous languages and can lead to a language being lost.

“In a lot of places in the world, even in Mexico, these indigenous languages are in danger for various reasons. If the children don’t want to speak it or are not encouraged to speak it, then the future of the language is in jeopardy,“ says Terraciano.

At UCLA, Náhuatl has been taught for the last three years at different levels. The university relies on native language speakers who are trained to teach their own language. According to Terraciano, about 30 students are learning the language, and taking Náhuatl classes can be used to satisfy the university’s language requirement. 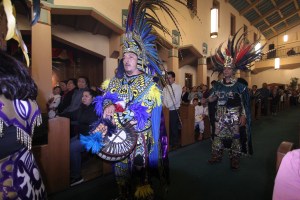 Semillas Del Pueblo, an El Sereno charter school, recognizes the importance of indigenous languages and has incorporated Náhuatl into its curriculum from the beginning.

“As educators, we know that the best quality of education always includes the mother tongue, cultural heritage and cultural relevance in the context of an indigenous student,” says Marcos Aguilar, the school’s founder.

The school started 16 years ago with the intention of including indigenous education. Students are required to learn Náhuatl and indigenous culture in kindergarten through fifth grade and can take Náhuatl as an elective in sixth through twelfth grades.

Aguilar says the school has had its struggles in offering the study of Náhuatl, however, since not a lot of people can teach it.

Metztli García, a 2018 graduate of Felícitas and Gonzalo Méndez High School, went to Semillas Del Pueblo for kindergarten and first grade.  Her mother wanted to expose her children to their cultural roots.

”[My mother] named me Metztli because she was super into her culture,” says García, whose name means Moon in Náhuatl. “All my siblings were named after a name in Nahuatl.”

Even though her mother didn’t speak Náhuatl, she wanted her daughter to learn. García remembers learning the alphabet and songs in Nahuatl, but she was the only one in her home who knew the language.

When Garcia switched schools, her ability to speak the language slowly faded away.

“I don’t practice any more,” Garcia says.  “There’s no one to practice with, no one around me.  No one knows it’s a language any more.”