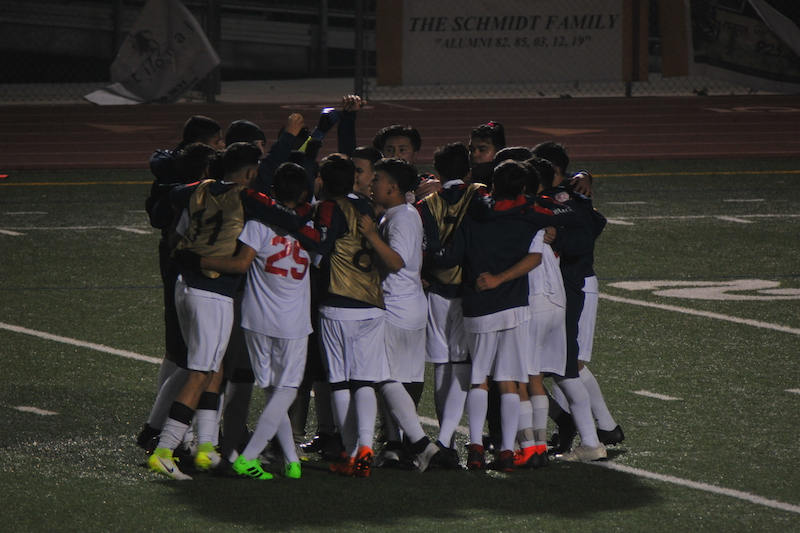 Posted at 17:34h in Sports by RPadmin 0 Comments

The Richmond High School Oilers varsity boys’ soccer team withstood an opponent visibly stronger, faster and taller to take a 1-0 win against the Northgate Broncos in a non-conference game on Jan. 4 at Northgate High in in Walnut Creek.

The Oiler and the Broncos fought a closely contested match until the 67-minute mark when Oilers forward Regilson Villatoro used a fast break to score an impressive goal to break the tie.

Oilers defender Manuel Navas cleared the ball from near their goal box across to the opponent’s right side of the field, 30 yards from the Broncos goal box. Villatoro controlled the long air pass that landed a few feet in front of him and the other team. He outpaced two Bronco’s defenders to position himself near the goal box, dribbling the bouncing ball within 15 yards of the goal, and kicking a volley that

“It was difficult to receive air balls or ground balls because the defense would overpower me easily, although in soccer, how tall you are does not matter,” Villatoro said. “If you play mentally strong then anything is possible. You just have to love the game and leave everything you got (on the field).”

For the majority of the game, the Oilers had a difficult time feeding aerial passes up the pitch. Richmond varsity head coach Rene Siles says his team, instead, kept the ball on the ground.

“We settled and put the ball on the ground more, but it was kind of hard because they play physical, so we had to play fast,” he said.

Although it took a while to crack the wall-like defense of the Broncos, Oilers goalkeeper Alejandro Madriz said his team hit Northgate where they thought it would hurt the most: the edges.

“We tried to hit the sides ahead of the defender and ahead of the forwards to take advantage of our forwards’ speed,” Madriz said.

After the Oilers’ efforts resulted in the only goal of the game, they mentally prepared themselves to hold the lead and come out with a victory over the Broncos.

Madriz says most Oilers players don’t play club soccer outside of school, so they don’t have much experience managing the later parts of the game.

The players can get sloppy and offer up an opportunity for goal. The Oilers did not play the perfect game, but their mistakes were limited, Siles said.

“We put our heads together and focused on clearing the ball clean,” Madriz said. “No penalty kicks, no corners, no fouls. Just get it to the other side.”

The team was able to organize themselves and play well under pressure, even when Madriz injured his left leg near the hour-mark of the game while diving for the ball with two charging Broncos forwards at the helm.

Madriz returned in the 80th-minute, and soon saved a shot on goal by Broncos forward James Walker.

“Before I got in, the coach told me to show no weakness and show no fear,” Madriz said. “That is what I did, and I did not let them get past me.”

Madriz got a clean sheet and Richmond got their eighth win of the season, showing the 2018-2019 varsity team is able to play — and win — together.

Right wing defender Saul Carapia says the Oilers advantage in difficult games is their chemistry and their dedication to soccer.

“We are all close together,” he said. “We have the will to play the game.”