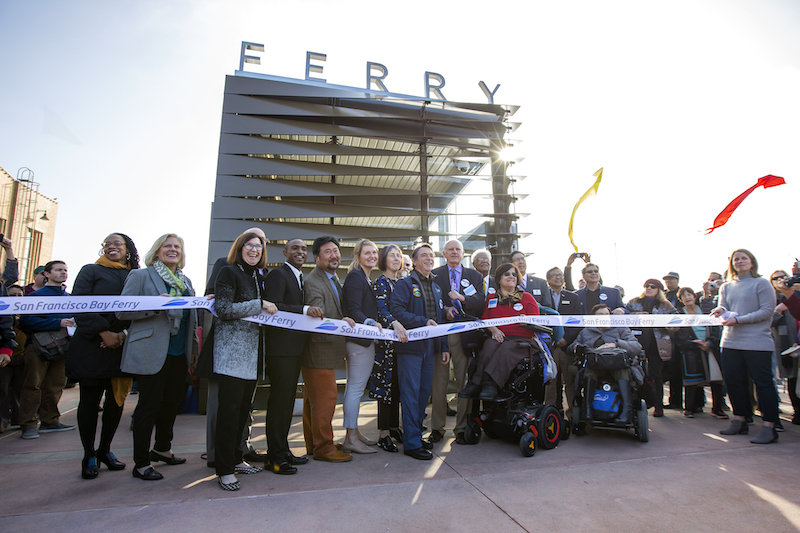 After a morning of gloomy cloud cover, sunlight filled the sky just as a San FranciscoBay ferry came into view in the Richmond harbor, smoothly pulling up to the newly completed ferry terminal.

The Craneway Pavilion, next to the new terminal, was packed full last Thursday afternoon for the official opening of Richmond’s new ferry service. Thousands of guests lined the water’s edge for a first glimpse of the newest edition to the Richmond waterfront, and to take a short ride around the harbor.

“This ferry will not only be a benefit to Richmond but to the entire Bay Area,” County Supervisor John Gioia told the crowd at the launch event.

Gioia believes that reopening the ferry route will strengthen the connections between San Francisco and Richmond, enticing more people to take jobs in the Richmond area as well as visit its national park and shops.

John Ryus, a Richmond resident, has similar hopes for the new ferry service.

“This is a great thing for Richmond,” Ryuse said, “and it shows the rest of the Bay Area that this is a viable city.”

Lesley Ferguson of El Cerrito said that the ferry opened her up to the idea of new job prospects because she’s “more apt to take a job in San Francisco now.”

“The light is so gorgeous that you just feel chatty and upbeat,” Ferguson said after taking a short ride around the harbor. “You know, it’s really a happy spot.”

Sixty-one years have passed since Richmond’s last sustainable ferry service in 1958, and now, thanks to subsidized funding from Contra Costa County’s Measure J — a transportation sales tax — it’s back.

Located at 1453 Harbour Way South, right next to the Craneway Pavilion and Rosie the Riveter World War II Homefront National Historic Park, the new ferry terminal offers an expansive view of the harbor and a parking lot capable of holding 362 vehicles. The ride from Richmond to the San Francisco Ferry Building takes 35 minutes; about the same amount of time as it takes to ride BART from the Richmond to the Embarcadero station.

The advertised cost for travelers to ride the Richmond ferry will be $9 for adults, $6.75 for adult Clipper Card users and $4.50 for youth (5-18), seniors over 65 and persons with disabilities. Children under five may ride free with a paying adult.

Currently, ferry services are available during commute hours, with four runs from Richmond to San Francisco in the morning and four returning in the evening. There will also be limited counter-commute runs during those hours as well.

There are plans to increase services to include non-commute and weekend trips, but funding remains a hurdle. The Water Emergency Transportation

Authority (WETA) intends to use Regional Measure 3 funding to expand service to new terminals in the Bay Area and enhance existing services funded by other means, including Vallejo, Alameda, Oakland and now Richmond. However, this funding is currently inaccessible due to litigation. In the meantime, officials are seeking other funding options.

“We think Richmond will be one of our busiest routes,” Thomas Hall, public information and marketing manager with WETA, said. “It’s a great location, a quick trip, and opens up all of Contra Costa County to convenient ferry service.”

Between the crowds filling the waterfront and more than a dozen requests for weekend service included in the Ferry Suggestion window at the pavilion, there’s no question that Richmond’s newly returned ferry service is bound for popularity.

Jenna Castellanos and her two daughters — 3-year-old Aria and 8-year-old Natalia — are already planning to make use of the ferry for future family adventures. After trying out the ferry they said they’re hooked.

“It’s so cool because I’ve never been on a big boat before,” Natalia said. “It’s so fun.”