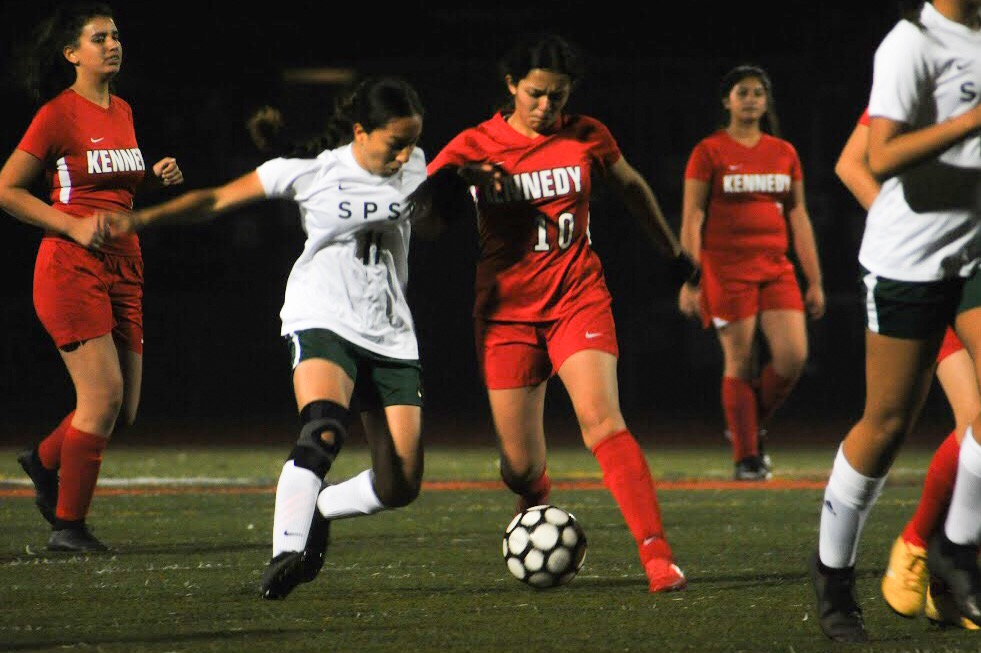 Posted at 06:10h in Sports, Youth by RPadmin 0 Comments

In soccer, being down by three goals can shatter any defender’s will to play the rest of the game, but the challenge of facing a tough opponent can test — and even solidify — your skills.

The Kennedy High School Eagles girls’ varsity soccer team did just that as they again faced off against a momentum-filled and undefeated St. Patrick-St. Vincent Bruins on Jan. 10. The Eagles lost 4-0.

St. Patrick dominated from the beginning and scored their first goal in the 6th minute. Long, through-ball passes from opponents up the middle of the field, fast plays up the sides, skilled dribbles near the Eagle’s goal box and long shots on target by Bruin players proved to be effective against the Eagles.

In the midst of a bombardment of Bruin attacks, however, Eagle left wing defender Kimberly Hernandez stood her ground, defended well and kept the score as low as possible.

“I haven’t really been going into the middle when the opponent is attacking to cut them off,” Hernandez said. “This game, though, I learned how to do it.”

Alongside defender Katy Aguilar and midfielder Vanessa Santos, Hernandez was a key player to stopping attacks and getting the ball back up the field.

“We have been practicing a lot on pushing up,” Hernandez said. “Starting from the goal kicks, we play more to the side with our wings.”

The more effective plays on the sides are due to better communication, she said, which is something they lacked the last time they faced the Bruins during their 9-0 loss.

Down by three goals in the 14th min of the second half, the Kennedy Eagles sprung up the left side of the field.

It started with when Hernandez tackled the ball away from a Bruins forward, ground passed it to Santos, who dribbled up the field before kicking a long ball up the left side. Eagles forward Frida Guitierez received the pass along the left sideline and cut into the middle of the field outside of the goal box. The play energized the rest of the Eagles, and the Kennedy players pushed up. Guitierez lost the ball, leading to a fast break opportunity for the Bruins.

Unfortunately for the Eagles, the counter attack run resulted in a cross-ball that bounced off an Eagles’ foot and into their own goal, marking the fourth and final of the game.

Kennedy Eagles head coach Yaquelin Valencia said in the future the team would benefit from having a bit more trust in their defenders, because they have been showing they can handle skilled forwards.

“They get nervous that if they push up enough they might get beat in a run,” Valencia said. “I tell them that it is okay to have the opponent forward go one-on-one with the last defender or our goalie because forwards make mistakes.”

In the 31st minute during a fast break run, Bruins halfback Janet Cervantes ran up the middle and received a long ball. She sprinted across the field’s halfway point near the goal box. Aguilar chased her down and uprooted the ball from Cervantes with a standing tackle. With pressure from other Bruins forwards mounting, Aguilar kicked the ball out of bounds to the left side.

“This time we did not let ourselves get intimidated by the three goals they scored on us,” Aguilar said. “In the second half, we did not make the same mistakes. We learned from them and adjusted our play.”

Coach Valencia praised the defense her team showed, but said they need a lot of work to become a scoring team, namely pushing up faster and putting more pressure on the team from the start of the game.

“As soon as we are high-pressuring, the other team started to make mistakes,” Valencia said. “If we do high pressure, the games will be better for us.”