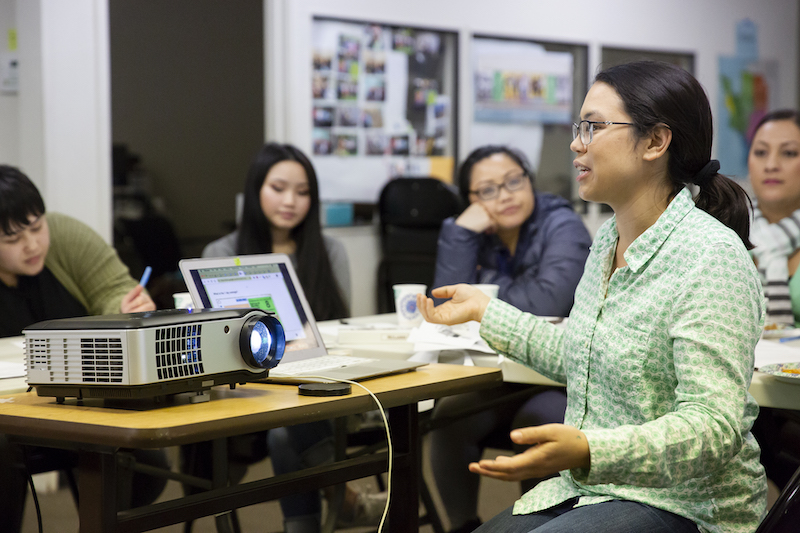 Posted at 03:41h in Environment, News by RPadmin 0 Comments

Above: Megan Zapanta discusses the Asian Pacific Environmental Network’s new air monitoring program during a meeting at the APEN office in Richmond on Wednesday, February 13.

As California’s wildfires worsen and occur more frequently, air monitoring and pollution reduction have come to the forefront.

In Northern California, the Bay Area Air Quality Management District has been creating funding and incentives for businesses, public agencies and even private residences in an effort to reduce pollutants and educate the public.

This past year, the Asian Pacific Environmental Network (APEN) received a Star Grant, allowing it to start a community air-monitoring program with nearly 30 home air monitors. Each project participant received a Purple Air monitor that they could place outside their home. APEN was able to give a small stipend to participating members to compensate them for their time spent monitoring readings and attending meetings.

The Purple Air monitoring devices read the particulate matter (PM) in the air to calculate the overall air quality of a region. The device uses a small internal fan to blow air past a sensor that uses laser beams to measure the reflectivity of particles in the air, much like dust particles shimmering in a sunbeam. Every 20 seconds, the monitor averages the particle count and uploads the results to the Purple Air monitoring map at purpleair.com, where results from every monitor in the country are available.

By zooming in to a specific region, such as a specific neighborhood in Richmond, community members can look at not only the results from their own monitor but those from a monitor down the street or a city away to compare air quality numbers.

While the Purple Air monitor reads particulate size and number in order to track air quality, it cannot define individualized particle types such as sulfur and metals that may be coming from nearby freeways or refineries.

Megan Zapanta, the Richmond organizing director of APEN, says that it’s about more than just the numbers.

“It’s getting community members involved in learning about scientific projects and active in understanding their own living conditions,” she said.

Zapanta sees this project as an opportunity to encourage involvement in the sciences and spur a community into action. By being actively involved and seeing daily air pollution numbers around their homes, Zapanta hopes that people will be encouraged to take further actions to reduce air pollution.

Christina Saeteurn, a member of APEN and an air monitoring participant, hopes to feel that way while she works on the project.

“We talk about it a lot, but when there are facts in front of us, maybe that will spark more of an urgency not just to myself but in others,” Saeteurn said.

In hopes of also encouraging engagement and gender justice within the community, APEN chose to specifically recruit women, transgender and gender nonconforming participants for the project.

Zapanta says that while they have had a lot of women joining regular APEN meetings, it was common that the women would be out-voiced by the men in mixed-gender spaces. The network wanted to create a space were women were given the opportunity for their voices to be heard alone.

She also sees this as an opportunity for education and environmental and political involvement for a demographic that can be more impacted by environmental hazards and has traditionally been the caretaker of the family’s health and safety.

Nai Saeteurn, Christina’s sister and fellow APEN member, is a single mother who jumped on the opportunity to take part in the air monitoring project. She feels it’s important to know what’s in the air that she and her family breathes.

“I hope that every woman can see this and know it’s not just a study. It’s about what is in your environment and what you’re exposing your neighbors to,” Nai Saeturn said. “You might not have control over what goes on in the air, but it’s good to be educated.”