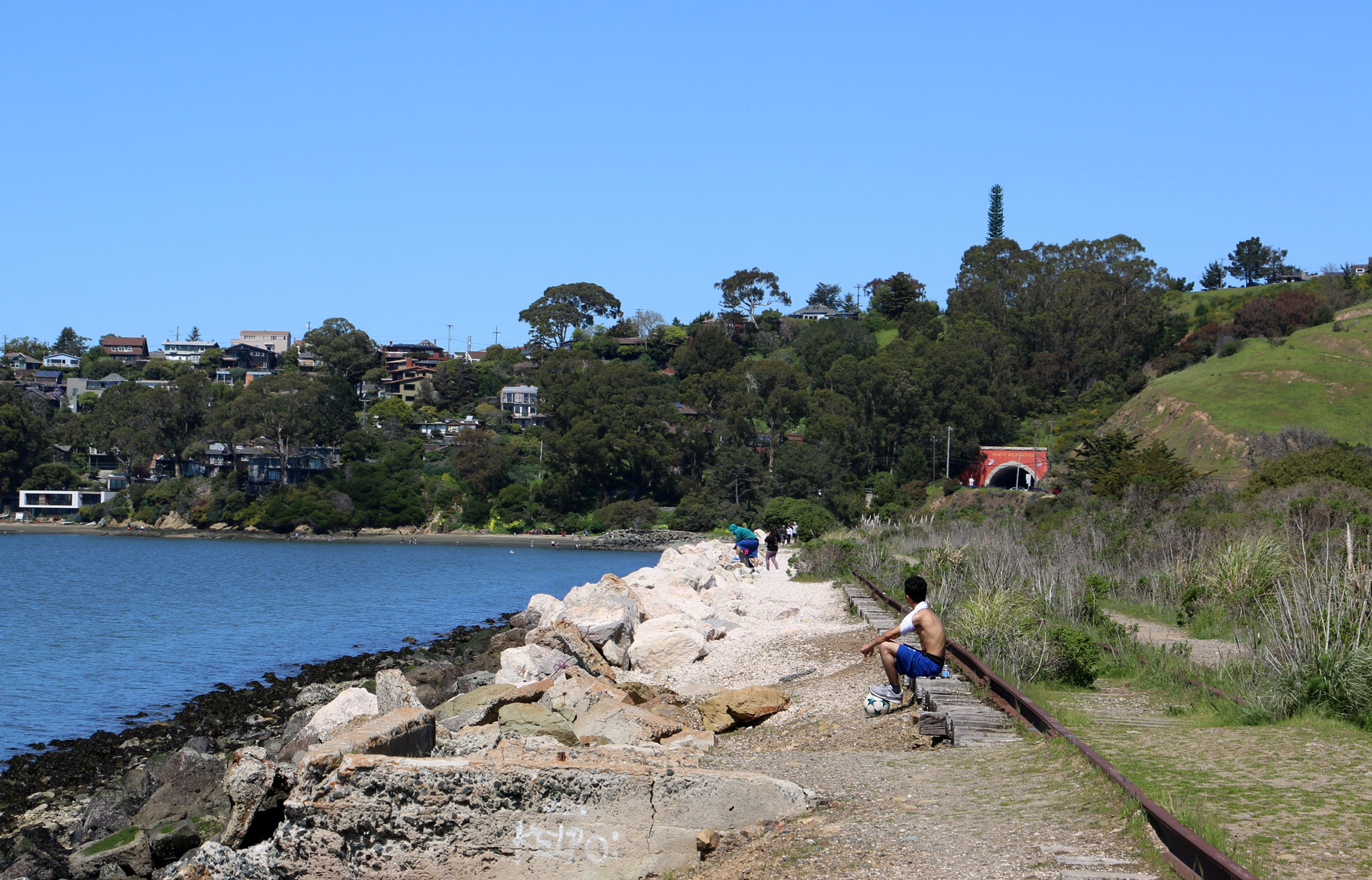 Posted at 20:18h in Neighborhoods by RPadmin 0 Comments

The Miller/Knox Regional Shoreline shoots out from the Point Richmond residential area into the sparkling blue San Francisco Bay.

It’s a long, heavily-used, 295-acre park, situated around a lagoon where ducks, geese, and seagulls regularly congregate. Joggers, dog-walkers and picnicking families can be found roaming the area on weekends, and chimes from a passing ice-cream truck occasionally cut through the air. To the west side of the path, adjacent to the Bay and above an outcropping of white rocks, an out-of-service, easily-missed, rusty and weeded-over railway runs the length of the park.

The old rail line marks the contentious history of the area, which has emerged again in a lawsuit between the East Bay Regional Park District and the Burlington Northern Santa Fe Railway over ownership of the rails. The district intends to remove some of the rail as part of a long-considered plan to improve the park, which the district’s board unanimously passed at a March 19 board meeting.

But the BNSF is opposed to the district’s plan and wants instead to maintain access to the rails, which they intend to use.

Chief of Planning Brian Holt talked briefly about the history of the shoreline during a district presentation at the meeting, which he said exemplifies the district’s commitment to fighting for open space and recreational experiences. He said the park was once a heavily industrialized area, but the district acquired the land from BNSF in the 70s, established the regional shoreline in 1975, and, through litigation with BNSF ending in 1991, acquired the Ferry Point section, where a portion of old BNSF rail remains. Another section of rail, fenced off from the park, is still owned and actively used by BNSF.

The objectives of the land-use amendment the board passed include the protection and enhancement of natural, scenic, and historical resources; improved public access; and the incorporation of strategies for climate adaptation and sea level rise. The district seeks to achieve this through various means, including the repurposing of historic buildings, adding a promenade near Ferry Point and restoring native grassland.

EBRPD General Manager Robert Doyle said at the meeting there was an easement given to the BNSF in 1991, which allowed use of the rails, but only to service a Bray Oil site, which the district acquired and cleaned up, and another site at the Terminal One Pier, which is being developed for residential use. Doyle said usage of the park has changed dramatically throughout the history of Richmond, and that millions of dollars have been spent to transform the park into what it is today.

“What has dramatically changed here is that Richmond has a long history from WWII, the Kaiser shipyards, of heavy industry, and this [park] was to be a relief for the workers, for the people who lived there, surrounded by industry, to have access to the Bay,” Doyle said. “But, today it’s residential. What’s happening around the adjacent private property, not district property but private property, is high density residential.”

Nine Richmond residents, including councilmember Demnlus Johnson III, spoke at the meeting in favor of the park district plan, and against BNSF. The railway company didn’t send any representatives to the meeting, but they did send a 17-page letter which argued that, for various reasons, the proposed plan was illegal — claims park district lawyer Carol Victor brought up and dismissed at the meeting.

BNSF did not respond to Richmond Pulse’s requests for comment.

Johnson, a fourth-generation Richmond resident, argued at the meeting that the park was one of the only places people could go to get fresh air, which was especially important considering the high rates of asthma in Richmond, particularly in minority communities.

“The park is one of our only places of refuge,” Johnson said. “To propose reactivating that BNSF track is a slap in the face not only to the city of Richmond, but to the residents who consider that a place they can go and get fresh air.“

Cesar Zepeda, co-chair of the environmental committee for the Sierra Club and President of the Hilltop neighborhood association, made similar comments about the importance of recognizing the environmental impact of the trains. He asked the board to protect those who suffer from pollution in Richmond, train-related or otherwise.

Other board members were also critical of BNSF. Director Colin Coffey criticized the letter directly, calling it “at best fantasy and at worst just, dishonest” because BNSF claims the track isn’t abandoned.

“It was not genuine or persuasive in the least,” he said.

Mayor Tom Butt said the city and BNSF have repeatedly run into contentious territory for a long time, whether it’s high-powered LED light pollution, mile-long coal trains congesting traffic, or trash. Butt said the city council is looking to pass a resolution supporting the EBRPD decision some time this month.

Buzz Baylis, treasurer of the Point Richmond Neighborhood Council, also spoke at the meeting and warned, alongside potential health issues, of trains blocking the view of the Bay. The PRNC voted to oppose BNSF plans to run diesel trains in February, and Baylis and PRNC president Peter Thelin both attended the park district meeting.

At a PRNC meeting last week, Baylis said there’s been some good news recently, but he warned that the issue wasn’t yet decided. “I don’t want to let you walk away here tonight with the idea that that battle’s over,” Baylis said. “I think we’re going to hear some more, but the answer’s going to be up to the court.”