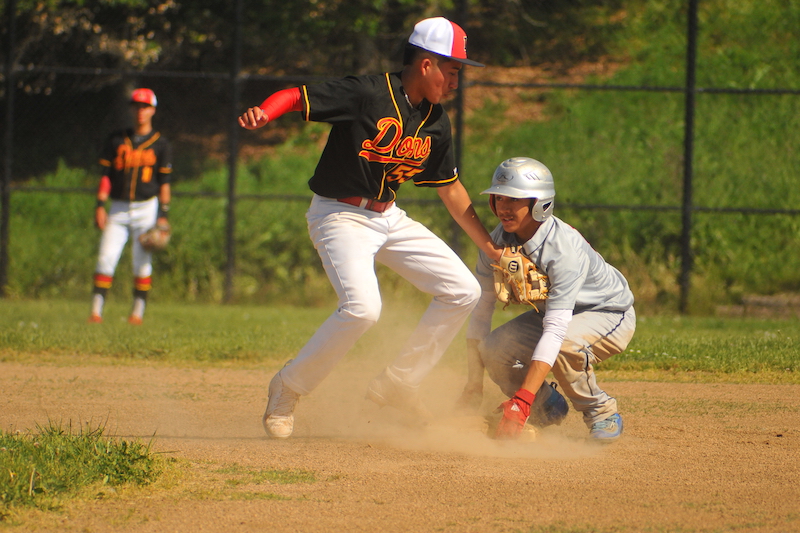 04 May Oilers Lose Steam in Final Innings Against Dons

Posted at 17:34h in Sports, Youth by RPadmin 0 Comments

Richmond High’s varsity baseball team dropped their fifth inning lead against DeAnza High in their 5-2 loss on the Dons home field on April 26.

The Richmond Oilers (4-11) started the game with confidence and were in control until the final three innings, pitcher Kevin Munoz said, when the team lost their momentum and couldn’t keep up with the DeAnza Dons (12-6) energetic sideline and aggressive batters.

Munoz pitched the entire seven-inning game because there was no second pitcher.

“My arm started hurting in the third inning,” Munoz said. With no relief coming though, he continued pitching. “I wanted to give my team a chance.”

In the bottom of the fifth, as the Oilers held a 2-1 lead, the Dons’ bench verbally challenged Munoz as he pitched, shouting “The agony,” and “He is tired,” along with other things, after Munoz walked two batters to start the inning.

With one out and the bases loaded, the Dons Jordan Holmes hit a ground ball toward Oiler’s second baseman Roberto Gutierrez. The ball made contact with Guiterrez’s glove, but it slipped away before he could make the play. This allowed Holmes to reach first base and Eric Arellano, who was on third, to pass home and tie the game 2-2.

What should have been the third out for the Oilers turned into a costly error when Fernandez dropped the ball. The bases-clearing hit solidified the Don’s 5-2 win.

The Oilers were not able to get on base after the fifth inning, except for Brian Maldanado in the seventh, who reached first base and then stole his way to third. But Richmond was not able to get Maldanado or anyone else home and ended the game with a sour reminder of the last game they played against DeAnza.

Two days earlier, on April 24, Richmond also led the game 2-1 at the bottom of the fifth, but DeAnza came back and scored eight runs in that inning alone.

“We had them beat in the fifth,” Oiler’s Coach Deryk Hudson said, adding that the Oiler’s have the physical talent to go after teams like The Dons, but they lack the focus to stay mentally strong all the way through.

The team has mostly inexperienced players, he said, but the Oilers can improve because gameplay is the only way they can learn to withstand the pressures of those crucial final innings.

“They have put in a lot of work to reach the bar to compete against teams that have players who have played all their lives,” Hudson said. “The next step for this program is to be able to play the last innings.”