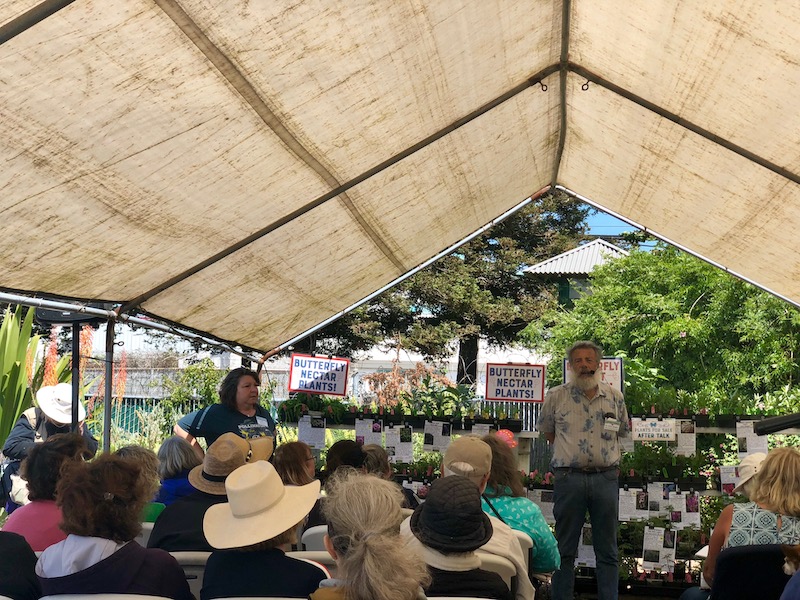 Posted at 16:03h in Environment by RPadmin 0 Comments

The event, hosted by Annie’s Annuals and Perennials in Richmond, educated Bay Area residents on how they can improve butterfly populations through gardening practices.

Art Shapiro isn’t quite ready to call the decline of butterflies a full-blown “insect apocalypse,” but he did tell the packed crowd at Annie’s Annuals 3rd Annual Butterfly Summit that “things are in the toilet, folks.”

Shapiro is a professor in the Evolution and Ecology department at the University of California, Davis, who has tracked butterflies along the Interstate 80 corridor for over 40 years, the longest study of butterflies in North America. Over 100 people gathered in Richmond on April 27 to hear Shapiro discuss his findings and how individuals can help butterfly populations.

Earlier this year, a landmark study found that over 40% of insect species are threatened with extinction, which could harm entire ecosystems. Butterflies are especially threatened; monarch butterflies reached a historic low last year, with an estimated 86% decline from the year before. Overall, the total population of monarch butterflies has declined 97% since the 1980s.

According to Shapiro, the decline of butterflies has multiple causes but is mostly due to human factors, including climate change, pesticide use and changes made to land such as converting butterfly habitat for human use.

“If the habitat is fragmented, the habitat areas are isolated from each other, which makes it harder for females to find host plants and habitat and reproduce successfully,” Shapiro said.

Each species of butterfly has different recommended host and nectar plants. Tamy George, of Oakland, said Shapiro’s talk motivated her to use her small porch as a butterfly habitat.

“I have a lot of indoor plants, but this motivated me to do more for butterflies outdoors, like planting a combination of host and nectar plants,” George said.

According to Shapiro, there are over 150 species of butterflies in Northern California. While the media attention on butterfly decline has mostly focused on monarchs, Shapiro says other species are even more threatened. Previously, some have attributed declining monarch populations to a lack of milkweed, which serves as a host for monarchs. However, butterflies that don’t rely on that plant are also struggling.

“Media coverage attributes decline of the monarch to a lack of milkweed, and says that good citizens should go out and plant more milkweed to help the monarch. Although the monarch is in terrible shape in California, it has suffered less than some other species in the same geographic areas that don’t use milkweed,” Shapiro said.

“Especially today, when there is a lack of native plants surrounding us day-to-day, a butterfly like [the pipevine swallowtail]  that is only found in California, and relies on a plant that is only found in California,” we need “to think about how we can create habitat for native wildlife and native plants, even if it is starting in our backyards,” Wong said.

In addition to increasing native plants and avoiding pesticides, Shapiro provided more general tips for Bay Area residents who want to help butterflies. He emphasized that because the butterfly decline can’t be pinned to any one specific cause, it is important to take a variety of actions.

“First, tell your politicians you believe in climate change and you vote. Second, minimize or stop the use of pesticides. Third, help create wildlife friendly habitats and corridors between patches of habitats,” Shapiro said.

“I already plant natives but came to learn more about what specific types of nectar and host plants are best for butterflies,” Kirton said.

Planting natives in backyards helps address one of the primary causes of butterfly decline, which is land use. Increased development has taken away valuable natural areas for butterflies, and filling backyards with native plants creates new wildlife corridors. Tara Rocha of Pollinator Posse, an Oakland-based organization that promotes pollinator-friendly landscaping, reminded attendees of this responsibility.

“Every single thing you do when you’re gardening impacts the local ecosystem. You’re not just gardeners, you’re stewards of the local ecosystem, and we need to move away from just planting what’s aesthetically pleasing to humans and towards host and nectar plants for butterflies, which turn your gardens into corridors,” Rocha said.