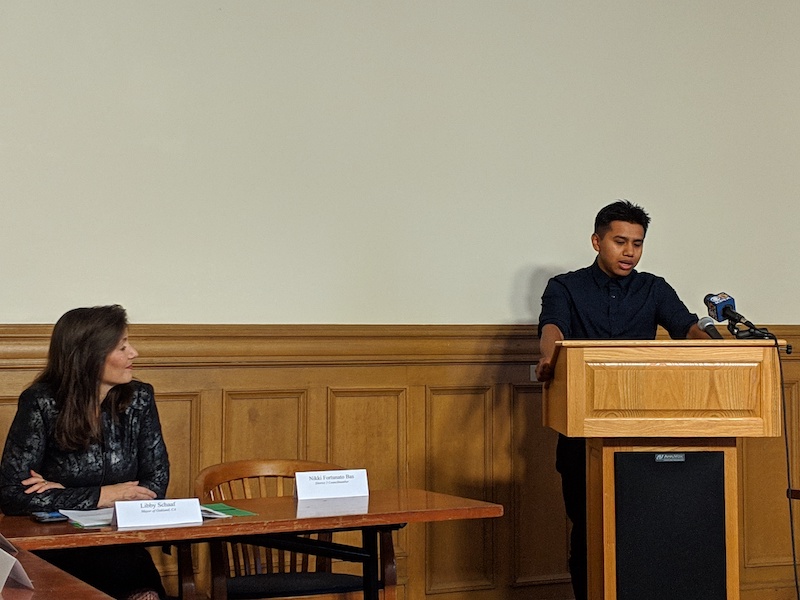 Posted at 17:30h in Business, Economy by RPadmin 0 Comments

The majority of restaurant workers in California are people of color, yet most of the restaurant jobs that pay a livable wage in the Bay Area belong to white workers, a new report shows.

The study says that statewide, 71 percent of restaurant workers are people of color, but only 28 percent of these workers in the Bay Area earn a livable wage as a server or bartender. In contrast, roughly half of all white servers and bartenders in the Bay Area receive a livable wage, which is at least four times the national poverty level. That’s less than $59,000 for a single-family household.

Oakland Mayor Libby Schaaf says the report shows a system with such a discrepancy in pay and, thus, in quality of life between whites and non-whites that “has roots in systemic racism.”

“While we have evolved, that history and those foundations are still impacting this huge industry today,” she said.

To see what’s at that foundation, researchers conducted Implicit Association Tests on restaurant managers in the Bay Area. It asks participants to hit a key indicating “positive” or “negative” to describe a given word flashed on the screen, while simultaneously showing a white or black face. Then, the IAT measures how long it takes the participant to press the correct button depending on the color of the face shown.

About one-third of restaurant managers tested showed an unconscious preference for white faces. White managers were more likely than non-white managers to display this bias, by a margin of 38 to 17 percent. The bias was strongest in managers aged 35-44 and those working in fine dining establishments.

Julia Sebastian — manager of research, impact planning and evaluation at Race Forward and one of the principal authors of the report — said the testing was done not to demonize individual people for their implicit biases of which everyone has some, but to get a sense of the scale of the problem.

“Implicit bias is not something that lives in the minds of individual people — restaurant managers and owners — but a dynamic that is baked into the policies, practices, and everyday operations of businesses and institutions,” she said.

The impact, however, of implicit bias can be felt on an individual level.

Joel Leon, a restaurant worker and a first-generation Mexican immigrant, said he repeatedly applied for server jobs for which he was perfectly qualified with years of experience, but was only offered dishwasher and busboy positions or denied outright.

“The thing that got me upset was that they favored the white male who had less experience, and he got the position,” Leon said at the report’s release.

To combat the kind of discrimination Leon experienced, Schaaf revealed a plan to offer recognition, licensing and tax incentives to restaurants that take the in-depth High Road Employer Training and Technical Assistance Program, by partnering with ROC United and Race Forward.

Establishments that take the “High Road,” could receive logos denoting a commitment to racial equity to use in promotions, which includes free advertising from state or local governments. Those restaurants would also be featured on ROC United Diner’s Guide App, which is available for free on iOS and Android.

The report states other incentives to help businesses take the training could include reduced permitting and licensing fees and tax breaks at the state or local levels meant to raise employee wages.

Jennifer Colliau, owner of the recently opened Oakland restaurant Here’s How, says “it would be great” if there were incentives for restaurants to achieve true diversity at every level, but is skeptical they would ever come to fruition. The bureaucracy of Oakland’s government, she said, threw up frustrating and expensive roadblocks at “every step of the permitting process.”

But, she added, that doesn’t change the fact something needs to be done.

“I’m not going to sit here and not care about diversity just because there’s not incentives for it,” she said.

Erin Wade owns Homeroom, one of two companies profiled in the report for its work with ROC United and Race Forward. She agrees with Colliau that incentives aren’t the way toward equity, but said restaurant leaders need to promote diversity for the workers, businesses, and the cities they’re in.

“I truly believe in my heart that the more inclusive a restaurant is, and the more it represents the city it’s based in, the stronger it is,” she said.

But, she says, if leaders don’t truly believe that and treat inclusivity “like taking your medicine,” then they won’t do it.

“And I hope that people get that. I hope they start to care,” she said. “I think that this is what the future of what being a really great business needs to look like.”