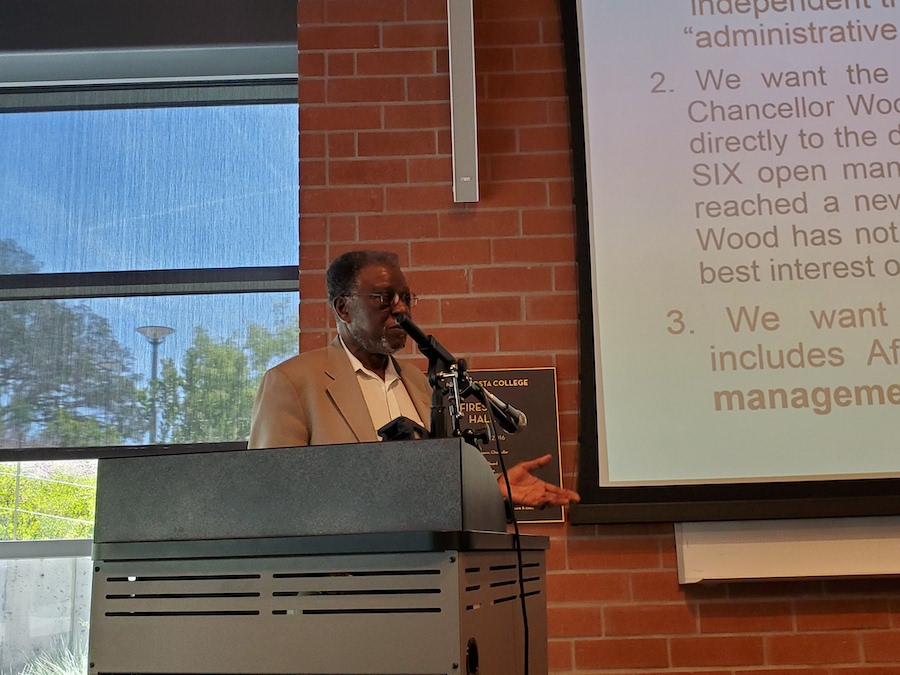 Posted at 00:11h in Education by RPadmin 0 Comments

The African American Staff Association (AASA) of Contra Costa College (CCC) declared its support for three top school administrators who have been placed on leave and are currently under investigation.

“The AASA wants to be clear of our support for president VanderWoude,” John Wade, the association’s president, said. “We look forward to reviewing the findings of the investigation and believe complaints or allegations may be erroneous and are unfounded.”

The investigation into VanderWoude and the vice presidents by the district is expected to conclude in early July.

In a statement sent to the campus community May 29, Chancellor Wood said he couldn’t discuss details, as the investigation involved personnel. “I know these decisions leave a leadership void at the college and our district is committed to mitigating the impact,” he said.

According to an AASA press release, Wood began investigating allegations of reverse racism and age discrimination in March, stemming from “anonymous complaints” made against VanderWoude, and Wood undermined the president by initiating a “comprehensive evaluation” on May 2 and a “behavioral skills survey” on May 14, which were violations of CCCD policy.

Manu Ampim, the chair of CCC’s history, anthropology and geography department, called for “our partners in the NAACP to assist in an independent third-party investigation of these administrative leaves because they are quite suspicious.”

Members of the Richmond and El Cerrito chapters of the NAACP were also in attendance, including Richmond president Willie Robinson, who said his branch stood in solidarity with leaders who are “addressing these apparent injustices” exercised by CCCD’s administrative actions.

Jeffrey Michels, executive director of United Faculty, said he was interviewed during the investigative process and was asked whether VanderWoude “was prejudiced against older white women.”

“I just want to say that I cannot imagine anyone making that allegation or asking that question if she had been a white man,” he said.

Michels said the question itself was offensive because VanderWoude had older white women in leadership within the Academic Senate and vice president Kincade is an older white woman.

Interim head Mariles Magalong is now the fourth president in as many years for the East Bay community college. She’s the current director of business services at CCC, which retired AASA member Michele Jackson says creates a conflict of interest.

“The interim president comes from the managing team of the business office, which includes supervising human resources, which also means she has served on 99.9% of the hiring committees,” Jackson said, “which means that the current president of the college has access to all confidential information on every employee, their families, their children, their insurance, their investments.”

Wood said this administrative shake-up and investigation stems from a “personnel matter” that began with VanderWoude’s appointment as president. But the AASA argues that the instability within the college has been prevalent since Wood began his tenure as district chancellor in 2017.

“We want to put this in perspective so everybody will know why this meeting is important and why we highly question the decision of Fred Wood and his role as the chancellor,” Ampim said.

Ampim outlined what he sees as a pattern of “destabilizing” the campus, which, he says, has affected African American students and staffers over the last two years, restating key points that were mentioned in a similar meeting between the AASA and then-college president Mojdeh Mehdizadeh in January 2018.

Then, the AASA addressed some of the same issues — such as enrollment, class cancellations and shared governance — with the colleges’ leadership because of an apparent shift in the school’s attitude toward African American issues in the fall of 2017.

“It was a dismissal,” Ampim said. “Any issues that were raised by black faculty, staff and students were being dismissed in a change in the environment here.”

According to the AASA, the lack of representation of African Americans — who account for approximately 21% of people on campus — across all levels of CCC was beyond evident in the lack of hiring. The AASA found that out of the 28 documented hires CCC made from 2017 to 2018, none were African American.

“How can this be an inclusive community when you systematically leave out a significant group on campus?” Ampim asked.

The AASA also contends the historical lack of diversity in the upper management of the college, as well as in the hiring process, showcased the district’s own definition of diversity.

“This idea of diversity has meant, increasingly, everybody but us,” Ampim said. “That’s what they mean by diversity.”

The AASA said the district’s decisions will deter qualified African Americans from applying to key positions of administration leadership.

“What candidates want to deal with this campus when we saw what happened with these black men who had the audacity to run for the vice president of Student Services and this recent bunch of administrative leaves?” Ampim said.

The school’s newspaper, The Advocate, reported that in November 2018, VanderWoude came under heavy criticism because two of those four African American candidates for the vice presidency had accusations of sexual assault, domestic violence and sexual harassment in the workplace in their backgrounds with some dating as far back as 1997.

Ampim said the backlash against the president for her candidates was essentially a “public flogging,” which made VanderWoude the scapegoat for a hiring process that has been traditionally run with the district human resources office having final say on the background check of candidates.

This week, district spokesperson Tim Leong said the final pieces of the investigation will be reviewed by district personnel “and a decision on the direction the district is taking in regards to the administrative leaves at Contra Costa College is expected to be announced next week.”