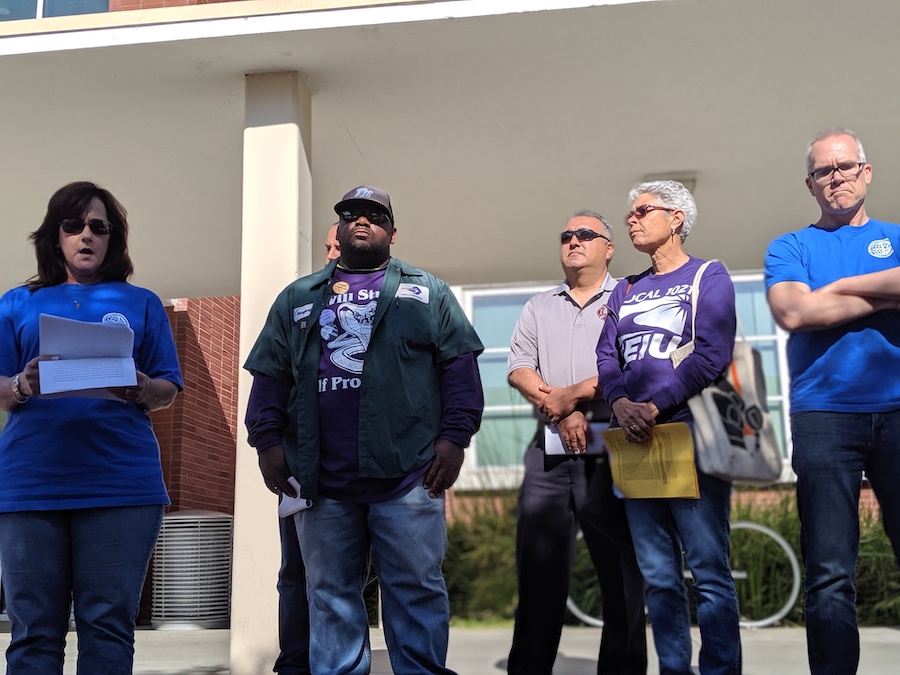 Posted at 22:39h in City Government, Politics by RPadmin 0 Comments

The plaza outside Richmond City Hall on the evening of June 4 was filled with city employees and local union members protesting the city manager’s new budget proposal that four local unions say is “balanced on the backs of workers and public services”.

The budget proposal eliminates multiple positions, laying off some workers — including multiple union members — slashes funding for many remaining roles, and disregards cost of living adjustments (COLAs), leaving wages stagnant for more workers in departments across the city of Richmond. The budget proposal simultaneously gives promotions and raises to a few notable administrators.

Gregory Everetts, president of SEIU Local 1021, said that he and other union representatives tried to meet with Martinez to explain how the proposal’s lack of COLAs would affect the workers.

“He’s not meeting with us. He doesn’t want to meet with us,” Everetts said. He wants us to wait 3 to 9 years [for another COLA]. If we do, we’re going to starve to death and lose our houses.”

City employees say withholding COLAs and the resulting wage stagnations are affecting their lives, which affects where they can afford to live.

Kevin Tisdell, a code enforcement officer who’s on the SEIU negotiating team, said he’s lived in Richmond for more than 20 years. He loves it, but it’s becoming increasingly hard to afford as he’s in a single-income family with a disabled wife while he’s in college.

“It’s terribly hard. Gas is going up, bridge toll is going up, everything is going up but your wages,” he said. “You try to do the best you can, but sometimes, you can’t have essential things.”

Union leaders say other Bay Area cities of comparable size pay workers COLAs with an overall average of 3% per year. Others like Palo Alto, San Leandro and Hayward get into double-digits.

Millie Cleveland, SIEU field representative, said that if the city council accepts the city manager’s proposal, it would be uncharacteristic and incongruent with the council’s concern for protecting minimum wage and rent control. “Historically, this is a council that has been responsive to working class people,” Cleveland said.

The unions are also upset at the $7.5 million deficit in the budget that wasn’t in the budget projection in February and wasn’t announced until April. According to the unions, Martinez is using the alleged deficit as the reason to justify layoffs and the lack of cost-of-living increases this year.

Asked if they would go on strike, if necessary, union members answered an unequivocal “yes.”

“But I don’t think they want that labor disruption,” Cleveland said. “It’s in their interest to have labor peace, and the lack of labor peace can affect the bond rating as well.”

As for Tisdell, he said that if the wages don’t increase, he would move his family to another city and find work there. “I’d be forced to,” he said.

Craig K. Murray, former development project manager in the city manager’s office, was one of the people who was laid off under the new budget proposal and only found out a few days before the rally.

If Murray had his way, he would insist on “more analysis” of the impacts of the budget proposal. “The city manager needs to slow this down and really review what these impacts will do to the city,” he said.

Following the rally at the city council meeting, Martinez gave an overview on the city budget, which included background, next steps, an analysis of the 2019-2020 budget, and fiscal improvements. He said the original proposed management restructuring, which involved about $1.8 million, has now been withdrawn.

“That’s something that we can’t really implement in this budget process,” he said. “We need to meet with the different unions if we were going to implement something like that.  So, as a result, the budgets deficit is now $2 million dollars.”

He asked the city council to develop a budget checklist and said he would continue working with staff and unions to prevent any future layoffs.

At the June 18 city council meeting, Martinez said his office now has a balanced budget for the coming fiscal year.

Martinez said his office would submit the final documents for the 2019-2020 budget for adoption at the June 25 council meeting.

“And of course we’ll make adjustments as you direct us, ” he said.

The city budget is slated to be approved by July 1.