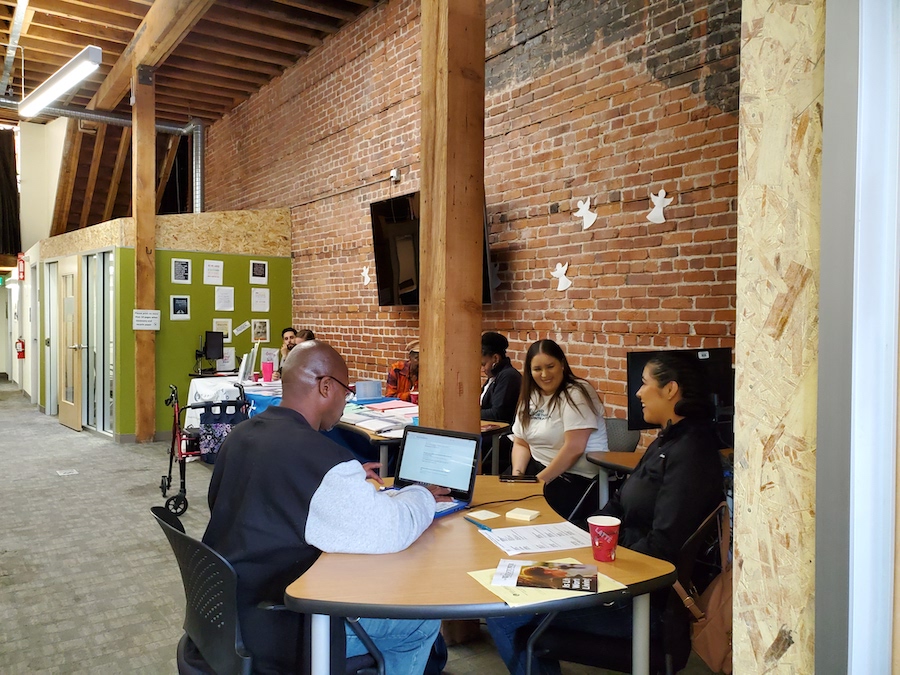 24 Jun Walk in with a Record, Leave with a Clean Slate

That, Richmond resident Daryle Mason says, was how long it took for people at Clean Slate Day to scan his record and have it wiped out. He waited in line for an hour, but it was worth it in the end.

“It wasn’t even a long process. It was like that,” he said, snapping his fingers.

Mason doesn’t like talking about his past because that’s where he — and so many others — are leaving it, as California’s Prop. 47 allows.

That’s why Mason went to the clean slate event at the Richmond Reentry Success Center on Macdonald Avenue on June 15. “I registered beforehand and had my appointment early this morning,” he said.

The event was designed to provide West County residents with criminal records an opportunity to talk with someone with legal experience and get information on different services available to them after getting their charges handled.

Clean Slate is a program offered through the county that aims at giving residents with prior convictions a way to have their charges expunged or their conviction history sealed or dismissed, which can open up opportunities that can be affected by one’s past, including housing, employment or government services.

After receiving counsel from one of the attorneys present and undergoing a Live Scan detailing their record, residents are given a follow-up appointment to discuss if they’re eligible. If they are, a county public defender represents them in front of a judge to hopefully make the expungement official.

Pat Mims, director of the Richmond Reentry Success Center, says he wants the Clean Slate events to continue long after the next one in September, hosted by Catholic Charities of the East Bay. The events are where he says “partners and providers” in West Contra Costa County get to work together and talk.

“It’s important that we collaborate and that we stay in communication,” Mims said.

Advocates say those minor convictions can follow someone, which improve their chances of being on a perpetual loop in the criminal justice system.

Andrea Crider, staff attorney for Bay Area Legal Aid, says people stuck in that rut need experienced help, like the people at her organization who provide civil law services, like representing people who have been denied employment or housing.

Contra Costa public defense attorney Brandon Banks has been involved with the Clean Slate unit for two years, which allows his office to provide record-clearing services year-round, even if most are post-conviction cases.

“There is a lot of need within Contra Costa for this kind of relief, and we see it in all parts of the county,” he said.

According to the Richmond Reentry Success Center, the community partnership through the Rubicon program has a positive response in the community, and Mims says he’s working to extend the hours of the event to meet the demand.

Rubicon is a program situated within six centers throughout Alameda and Contra Costa counties that, according to their website, aims to break the “cycle of poverty” by helping those formerly incarcerated reach gainful employment after reentry.

For Mims, there’s enough evidence to show the justice system and the homelessness crisis overlap, which is why all the organizations work together: so people leaving the criminal justice system have some place to be at night, while they “work on their challenges and barriers as they navigate acclimating back to society.”

“A number of the people in this homeless crisis are impacted by the criminal justice system,” Mims said.

And California law says many are due a clean slate.