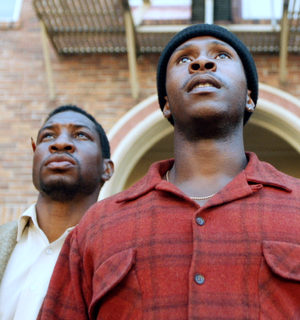 Posted at 07:33h in Arts and Culture, Bay Area by RPadmin 0 Comments

The Last Black Man in San Francisco has incredible cinematography, an exceptional cast and a marvelous story line that engages you in a dramatic story about home and family.

The film snaps a portrait of San Francisco’s mix of people, their culture, and the city’s demise due to pollution and gentrification.

The movie, written by Talbot and Jimmie Fails, follows part-time hospice nurse Jimmie (Jimmie Fails), and his best friend and amateur playwright Mont (Jonathan Majors). They try to reclaim Jimmie’s childhood Victorian home through adverse possession —better known as squatting — after the white older couple that lives there moved out because of a death in the family, leaving the house empty.

The Last Black Man in San Francisco’s story made me miss the first home I lived in when I came to the United States. Coming from Mexico when I was four, I consider Oakland as my hometown because that is where I first started to develop my personality and identity. Now, the places I used to live in Oakland are filled with hypocritical white liberals and their hipster ideologies.

These newbies see Oakland as a place where modernization and innovation is emerging, but close their eyes to the disproportion of wealth this trend is having upon local minorities and predominately white newcomers. And instead, they mask the injustice with breweries and overly high-priced coffee.

While watching The Last Black Man in San Francisco, I felt a deep longing for living in Oakland when it was full of people of color like me.  I saw the movie in Oakland’s Grand Lake Theater and I was surrounded by older white people. The irony was staring me in the face.

After the movie, I drove past my former rented-out old Victorian house 33rd Street in West Oakland that’s been turned into a duplex since my parents moved us out. I was flooded with a rush of nostalgia, both good and bad. The house has been remodeled, gated up and painted a different color.

But as different as it is — just as Jimmie explores his childhood Victorian home — I would still like to go inside and look out the window as I did when I was young, sit in the room where I ate dinner or even lay on the floor where I played marbles with my father when I was 6.

Sadly, like in San Francisco and in the film, rent in Oakland went up, and tech workers and other more affluent people began to move in. Eventually, my family moved from houses to apartments until we moved out of Oakland and into Richmond. $900 a month for a two bedroom turned into $1500 a month for rent in Oakland. In Richmond, they were able to find a middle ground, $1,100. Now that middle ground in Richmond is disappearing fast, too.

Jimmie — just as my dad and mom wished for us in Oakland — never wants to move from San Francisco, even when everything is pushing him to leave. But Jimmie refuses to leave because he loves the city. In one scene, a preacher in the streets yells, “This is your home,” referring to the growing population of black people who are leaving the city. But Jimmie and Mont are the only ones listening to the sermon.

When the wait for the bus becomes too long, Jimmie states that they will not make it on time and they should go skateboarding. As Jimmie begins to skate, Mont follows, running behind. Then Mont gets on the board too, and both begin to roll down the sidewalk on a hill.

The scene that follows has been the best minute or two of any movie I have seen in recent years, and it explains why Jimmie and Mont love SF. Director Joe Talbot makes it seem as if you are the eyes of Mont and Jimmie as they zoom past different places in San Francisco.

In an elegantly smooth slow-motion shot, you see black people hanging out in the streets. You see laughing children, shop owners and the white faces of downtown office workers.

This scene alone makes me want to watch this movie again in theaters because it is so authentic. If you are part of your city, you should enjoy passing by the different types of people that share this place with you.

The slow-motion, sharp close-ups and beautiful landscape shots are sprinkled so well throughout the movie, engaging your eye like how your taste buds react to different condiments on a burger.

As great as they were, the cinematography was not as captivating as the movie’s relevant and relatable plot.

Jimmie’s current living situation involves sleeping besides Mont’s bed in a small room in Mont’s grandfather’s cottage located by the toxic bay in Hunters Point. It’s not an ideal situation for Jimmie, and plenty of people in the Bay Area are forced to live cramped together just like them. For Jimmie and others in real life, finding better accommodations might mean leaving San Francisco.

The movie’s title, The Last Black Man in San Francisco, isn’t a literal comment on Jimmie, but his story is that of many black men. And if things continue like they do in the film, one day there will only be one last black man in San Francisco.