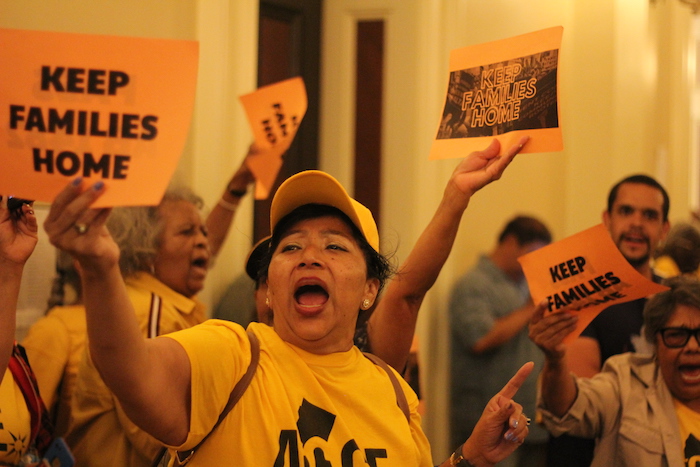 Posted at 03:00h in California, Politics by RPadmin 0 Comments

Housing advocate Sasha Graham remembers Richmond before rent control, and the damage high rent increases had on her and her son.

For Graham, the 6-1 Senate Judiciary Committee vote in favor of Assembly Bill 1482’s anti-rent gouging and just-cause eviction laws on June 9 takes California a step closer to protecting renters like her.

Graham testified to the California Senate Judiciary Committee about her experiences renting in Richmond to explain why she is in favor of passing AB 1482.

In 2014, before rent control was enacted in Richmond, Graham’s rent went up by $1,000 after the house she lived in was sold to a new landlord. She was able to pay the increased amount for three months, but the new landlord eventually decided to evict her and flip the house.

Graham became homeless with her son for three years and had to couch surf while working and attending UC Berkeley.

“How is it humane that we let landlords throw people into the streets for no reason other than profit?” Graham asked the committee during her testimony.

She and other Alliance of Californians for Community Empowerment (ACCE) Action members caravanned to Sacramento from Richmond, Los Angeles, Bay Point, San Francisco and other California cities to visit senators’ offices to show support for protections for renters on the committee floor.

“In California, we are in the midst of one of the worst housing crisis in history,” Chiu said during the hearing. “The median rent in California has increased by over a third, while median income has stayed flat.”

The second part of the bill calls for just-cause eviction. It mandates that landlords give tenants a reason, in writing, that they’re being evicted for something other than arbitrary, retaliatory or discriminatory reasons.

AB 1482 comes with an exemption: housing that has been built in the last 10 years. The law would expire in 2023, when lawmakers could revisit the issue, Chiu said.

Richmond would not be affected by AB 1482 since it passed a rent control measure in 2015. However, the unincorporated areas, like those in Richmond and elsewhere, would, said Richmond City Councilman Melvin Willis, who attended the hearing with ACCE.

The bill now moves on the Senate Appropriation Committee and, if passed, to the senate floor. AB 1428 was first introduced in February and has been amended multiple times, including lowering the original cap from an average of 7 percent to the current cap.

Minutes before the judiciary committee discussed AB 1482, those who supported and opposed the bill chanted back and forth in a southwest capitol building hallway.

Organizations like Bay Area Homeowners Association (BAHN) have opposed the bill and drew a large crowd to urge the committee to vote against it. Landowners and developers argue AB 1482 would scare away developers from California.

“With Oregon’s seven-percent cap and announcements they may go lower, we have seen a 38-percent decline in multi-family investment,” California Apartment Association representative Debra Calrton said.

Carlton says the housing crisis will only get worse when there aren’t enough places for people to live in, and one red flag is that developers are already looking at other states as a more viable option.

Chiu, however, believes the rise in the yearly cap should be sufficient.

“Developers and owners would still have enough room to profit,” he said.