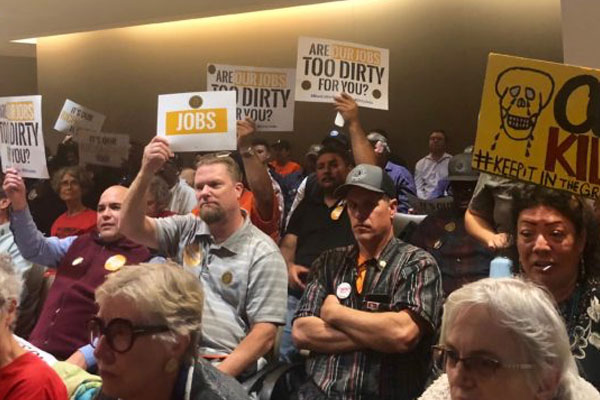 More than 150 people took to the Plaza before the July 18 meeting, where planning commissioners considered an ordinance that would effectively ban the storage and handling of coal and petroleum coke, a byproduct of the oil refining process.

The group “No Coal in Richmond” planned a rally and press conference before the meeting, but the first few speakers — including Contra Costa County Supervisor John Gioia ¬— were drowned out by chants from the union groups. Other speakers shared their concerns over the health impacts of coal operations.

Patty Ponce said she was born and raised in Richmond and is concerned how coal impacts her family’s health.

“I have a daughter who is asthmatic. Having coal in our community only increases the amount of toxins we are exposed to,” she said.

Louise Lang, a Richmond resident who supports the ordinance, said she was “surprised” by the large turnout against the ordinance.

“This is an important topic, and we want clean air for all people, no matter where they live in Richmond,” she said. “We have a difference of opinion here, but I would like to see them get clean jobs, and they’re being paid to do something that’s harming a lot of people.”

The planning commission meeting was the first reading of the ordinance, which was drafted by city staff at the direction of Richmond City Council, who makes the final decision. If passed, it would include a three-year phase-out period.

City staff initially recommended that the commission support the ordinance, based on negative health impacts posed by coal and petroleum coke. According to the staff presentation, particulate matter from coal and petroleum coke is linked to health problems, including chronic respiratory conditions and cardiovascular disease.

A variety of environmental groups support the ordinance, including the Sierra Club San Francisco Bay Chapter, Communities for a Better Environment, Sunflower Alliance, the Interfaith Climate Action Network of Contra Costa County, Richmond Progressive Alliance, and No Coal in Oakland.

In Richmond, the Levin-Richmond Terminal is the only business the ordinance would impact, and many workers from the terminal and labor unions argue it would kill jobs at the terminal. Tensions remained high once the meeting began as more than 60 people made public comments.

Supervisor Gioia led off the public comment period by stressing that the city could halt coal operations without losing jobs.

“Workers deserve good jobs, and the community deserves healthy air. I don’t think anyone here disagrees with that. It’s unfortunate that some frame this as either you’re for workers or for healthy air,” he said. “I believe that, here in Richmond, we can rise above that stereotypical framing. We can phase out coal in Richmond and protect jobs and the environment at the same time. The coal ordinance attempts to do that.”

As Gioia’s allotted two minutes ran out, those against the ordinance shouted out, “Your time is up,” and “Don’t kill jobs,” a trend that continued throughout the meeting. Public comments on both sides were repeatedly met with a mix of boos and cheers.

However, a steady stream of terminal employees and union members argued that there are no other products the terminal could ship, meaning the ordinance would result in job loss. Those against the ordinance also said they wanted more data on the specific air quality impacts in Richmond from coal and petroleum coke operations, possibly from community air monitoring required by a state law passed in 2017.

Commissioners provided terminal owner Gary Levin 10 minutes for his comment at the end of the hearing. Levin stressed that the terminal employs 62 people, and that the coal ordinance would significantly impact jobs in Richmond.

“There is no other viable business out there to replace the business that would be prohibited by this ban,” he said. “Many years ago, we were an import terminal and products were coming in for manufacturing and industry, but these other commodities have disappeared. There is nothing out there to replace what we are doing now. If there were, then I’d consider it.”

This appeared to be the deciding factor for commissioners. After asking Levin a series of questions about operations at the terminal, commissioners concluded that they did not have enough information to support the ordinance.

“I had assumed there would be an opportunity for the business to shift to some of those earlier products that went through the facility before, but it saddens me that this seems to be an either-or decision,” Commissioner Nancy Baer said, noting that she initially was leaning towards supporting the ordinance.

Commissioners voted to delay their recommendation until further study is completed on the health impacts of coal and pet coke and the economic implications of a coal ban.

City council may still consider the ordinance at a future date.