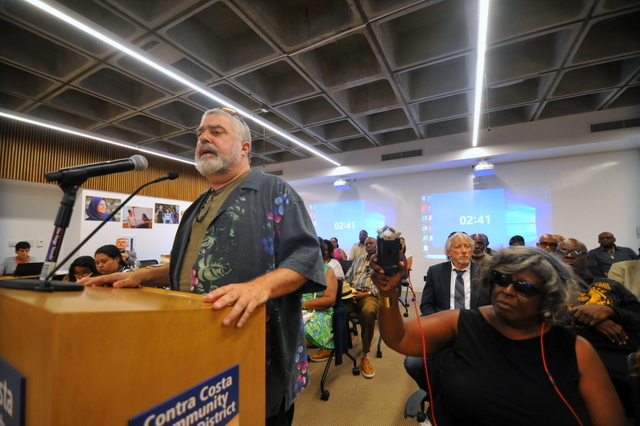 Posted at 19:40h in Education by RPadmin 0 Comments

There was resounding support to reinstate three top administrators of the Contra Costa College District when its governing board opened the issue to public comment at its July 24 meeting.

President Katrina VanderWoude and vice presidents Carsbia Anderson and Susan Kincade have been on administrative leave since May 29 after Chancellor Fred Wood released a campus-wide email stating that this disciplinary action would be pending until the “completion of an investigation of a personnel matter.”

Furthering confusion around the district’s future and leadership of the San Pablo-based college, Wood recently announced he would be retiring from the board next year.

Members of the college’s African American Staff Association (AASA), representatives from the Richmond NAACP, as well as San Pablo Mayor Rich Kinney, attended the meeting as professors and district colleagues voiced support for the school’s leadership while questioning the board’s trajectory.

Retired AASA member and former CCC professor Michele Jackson urged the board to hand the keys of the college back to the administrators, specifically letting VanderWoude run the college. Should an emergency occur at the college, she said the media and public would be at VanderWoude’s door to demand answers, not the college management team.

“She (VanderWoude) deserves to run it,” Jackson said. “Management has got to get over the fact that they have an African American female standing there telling them what to do while doing it fairly.”

The current investigation into VanderWoude stems from complaints from an administrator who accused her of “reverse racism and age discrimination.”

Physics and Astronomy chairperson Jon Celesia, a self-described “fair skinned male,” spoke on the fairness VanderWoude shows. One example he gave was when he referred a job candidate that would have brought diversity his department, but the president declined because the applicant was not within the hiring parameters.

“I’ve experienced nothing but openness and professionalism from day one. It was wonderful,” Celesia said. “I also experienced a commitment — a true commitment — to working with this campus to build it to something special.”

The majority of those who spoke in front of the board continued to question the validity of the administrative leave, as staff likening the latest chapter of instability at the college to the continued “gentrification” of the campus.

Manu Ampim, president of the AASA, challenged the “systematic misinformation” Wood gave to the board.

“They [Wood and his colleagues] have no understanding of what is happening on our campus for making decisions here in Martinez,” he said. “The campus has been gentrified. There has been a systematic exclusion of faculty of African descent, managers and classifieds.”

Ampim went on to reiterate the “disturbing trend” that the AASA presented to Wood in early 2018 about the 28 straight hires that were made without one qualified African American being brought on.

For Ampim, the whole ordeal takes the focus off of students, who the institution should be aiming to please.

“As you can see from the [public] comments, this is a cross-section of faculty leaders that have been around for more than a decade, from the Academic Senate and the United Faculty, those of us with different backgrounds,” Ampim said. “We all agree from different points of the circle that this is absolutely unjust and makes no sense whatsoever. These are racial and petty personal politics that have nothing to do with students.”

Tim Leong, CCCD’s director of communications, told the East Bay Times in May that the district was hoping to complete the investigation and have a decision by July 1, so long as there was “enough information” available to finalize the process.

But with fall semester approaching quickly and no formal decision having been made for or against the administrators, many in the college community are feeling the pressure as six leadership positions remain vacant because the district has halted the hiring process.

These vacancies and “musical chairs” by the district, according to Ampim, continue to reflect poorly on the institution and staff, such as Jon Celesia, who says the confusion will affect the future hiring candidates.

Ampim says the board needs to be “bold” in either firing VanderWoude without cause or reinstating her because the current situation is not going to fade away.

“What does the community do if they decide to pull the trigger? Let them do it and see what happens,” Ampim said. “There will be social unrest that they cannot predict and that social unrest will not only be local it will be national. That’s a guarantee.”

The board has yet to make a decision regarding VanderWoude and the other administrators, leaving it without top leadership heading into August.