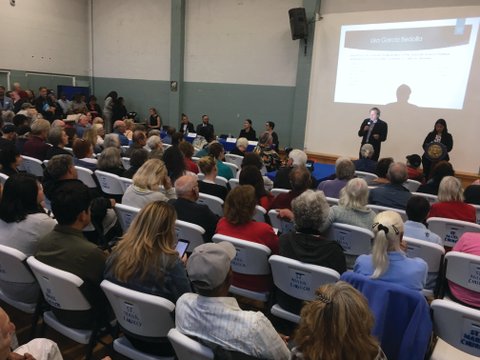 Posted at 19:20h in Immigration, Politics by RPadmin 0 Comments

Around 300 people packed the community hall at St. Mark’s Catholic Church on Aug. 5., filling every seat and leaving standing room only against the walls.

“There is a human tragedy going on in the (southern) border,” DeSaulnier said.

One of the question cards asked how to address Donald Trump’s anti-immigrant rhetoric that fuels white supremacist terrorism, especially after a gunman targeted Latinos as a Wal-Mart in El Paso, Texas. The crowd erupted in applause when the question was read.

Desaulnier said that individuals should be held accountable for what they have said and what they do to promote violence.

The president, who has repeatedly made racist comments, must be impeached, DeSaulnier said. He is the 14th member of Congress to call for impeachment, he said as the crowd applauded.

The congressman acknowledged that Trump was not the first to deport immigrants at a large scale, but he did point out the president ran and was elected on a campaign against immigrants.

Now in power, Trump has cut off empathy from the White House to immigrants and has criminalized asylum seekers, DeSaulnier said, pointing out his visits to detention centers last year.

“I don’t know how anyone isn’t appalled at what we saw,” he said.

Freedom for Immigrants has tracked the more than 200 immigrant prisons and found Texas, California, Arizona, Georgia and Louisiana detain the most immigrants. Those detention centers have cost taxpayers $144.35 dollars per person per day in California, according to the same report.

People are usually detained for 34 days, but some have been in detention for up to four years. And the longer they stay in detention camps, the higher their risk of medical issues, malnutrition, sexual abuse and other problems.

Garcia Bedolla, political analyst and town hall panelist, said immigrants are criminalized and are kept away from legal counsel.

“Only two percent of people seeking asylum have legal representation,” she said.

Moreno, an immigration attorney, said that asylum seekers have to wait ridiculous amounts of time for an interview to start the asylum process because of the backlog of cases. And most immigrants are being rejected, Moreno said.

“A lot of immigrants can’t afford it, but those that do have counsel are getting their cases approved,” Moreno said.

One way to hold immigration officials accountable for the human rights violations they have committed is to give immigrants in those camps legal counsel, he said.

Audience members also had questions about gun control, including how gun violence could be curbed.

The gunman that killed three people at the Gilroy Garlic Festival purchased a semi-automatic assault rifle in Nevada and brought it into California, where it was illegal. DeSaulnier said gunmen can abuse those types of neighboring state legal loopholes.

He also said a majority of Americans now support gun control, but they need to protest and call members of Congress that don’t agree with it to urge them to reconsider their stance.

“Not everyone has to go to a war to fight a war,” DeSaulnier said. “We have to defend our democracy because we are at peril.”