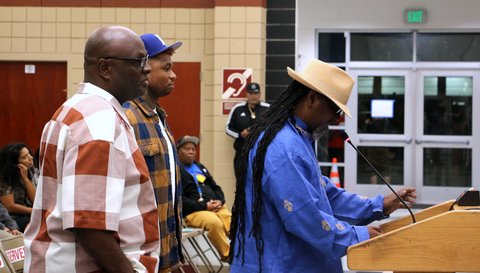 Posted at 17:44h in Education by Pulse Editor 0 Comments

Students at Richmond schools won’t be having Mindful Life classes this year following the action of the West Contra Costa School Board Wednesday. The board — on a split vote — denied reinstating the Mindful Life project in the district after finding a lack in documentation on how program teachers are trained.

The decision came despite a staff recommendation to reinstate the program with supplemental professional development. That reinstatement idea failed on a 2-3 vote with board members Tom Panas and Stephanie Hernández-Jarvis voting to approve.

In August, after a number of complaints from former Mindful Life Program (MLP) teachers, the board put the program on hold until district staff set a standard for what they believed mindfulness programming should look like, followed by an evaluation of the MLP. Martine Blake, district director of family and community engagement who was in charge of setting up this standard gave a presentation on the MLP at the board meeting.

The Mindful Life Project is a Richmond-based non-profit founded in 2012, which seeks to teach underserved children self-empowering skills such as mindfulness so they can develop confidence, resilience and self-awareness. Blake defined mindfulness as “paying attention to the present moment, without judgement” in the presentation.

Brown formally submitted a complaint in August to the school board alleging that Mindful Life didn’t adequately train facilitators and had copied their curriculum from other agencies.

Amani Johnson and several former employees at the meeting offered their perspectives on the program. Johnson said she’d like to see a survey of the MLP to show the demographics of hired and fired employees.

Umen Taylor suggested the district or board members do their own investigation. “See how many black males and females have been fired at an alarming rate,” Taylor told the board. “Talk with women from various backgrounds and see how many have stories about feeling unsafe or threatened.”

About 20 people spoke in support of MLP, including Farnaz Heydari, principal of Grant Elementary School. She stressed the empirical benefits of mindfulness and said the vast majority of her staff had voted for Mindful Life to return this school year.

LaReese Stitts-Hunt said Mindful Life had helped her son when his brother was murdered the day before his seventh birthday.

The board expected to be making a decision based on a staff-developed standard. But that standard wasn’t completed by the time of the meeting. Blake said there has been little research done on school-based mindfulness interventions — and the best practices to use to set a standard don’t exist.

Blake instead presented a new system of evaluating Social and Emotional Learning (SEL) programs, and placed the Mindful Life Project into it. The result of testing compliance of the program was a fairly even mix of “yes,” “mostly” and “somewhat,” with recommendations listed on how to bring the program into full compliance.

The board was split on how to proceed. Hernández-Jarvis said she didn’t see the benefit in taking away a service and leaving a void — particularly because the funds spent on Mindful Life are school site funds, decided on by each school.

Boardmember Valerie Cuevas said she believes the main issue is how the program instructs its instructors. “I don’t think it’s unfair for us to say if you want to teach mindfulness in our schools you should have some level of certification,” Cuevas said.

In a back-and-forth conversation on what mindfulness training consists of between Boardmember Mister Phillips, Cuevas and J.G. Larochette, Phillips asked Larochette how mindfulness instructors are certified.

Larochette, the founder of the program, said that mindfulness organizations varied in the way they do certification, and that Mindful Life certifies all its instructors. Phillips followed up asking Larochette what he’d done to get his certification. Larrochette said it depended on what certification Phillips was talking about. He said he was trained by Mindfulness Schools, in Emeryville where he’d done a one-year fellowship.

He did not graduate because he realized that his Mindful Project needed its own format, he said. “I realized this curriculum was not the curriculum we wanted to have for youth in Richmond,” Larochette said.

“So you’re telling me your certification is a hodgepodge of things you’ve put together and now you’re certified?” she asked.

Larochette said no and that Mindful Life had a curriculum. Staff certification required 80 hours of study, he said. Documentation had been shared with the district, he said.

Cuevas said the issue presented a huge liability challenge, and that she feared that there was a possibility the school district could be sued by families over Mindful Life employment practices. To move forward with Mindful life, Cuevas said, they would need an outside agency certifying the MLP employee training.

Larochette said he felt the MLP was being given a different criteria from every other program, but they would step up. He said seven years of data proved their impact, and that they had worked hard to provide the district with everything they could.

“I see your point. And I see somebody else’s point. I see everybody’s point, which is why we will set our own standard,” Cuevas said. “There is a standard we will set for training that will be met or you won’t work in this district.”