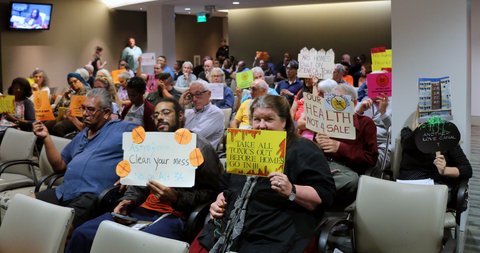 The Richmond City Council has voted to support a development plan that includes capping and then building on the polluted Zeneca site.

The Zeneca site, which has a history of heavy contamination, is located between the Richmond Annex and Marina Bay area. The Department of Toxic Substances Control (DTSC) took control of managing the area in 2005.

The developer, Irvine-based Shopoff Realty Investments, looks to build 4,080 residential units on 320 acres along the south Richmond shoreline. The planned 65-acre development at the Zeneca site would include residential units, a grocery store, restaurants and a waterfront park, according to a 10-minute Shopoff presentation to council Tuesday.

On July 10 last year, after much community feedback, the council unanimously voted to pursue a full cleanup of the site prior to developing it, which would involve digging up the toxic soil and hauling it elsewhere. This was in opposition to a DTSC recommendation of capping the site, which public commenters argued wouldn’t do enough to ensure the health of locals and the environment. The following month, then-city manager Bill Lindsey sent a letter to DTSC establishing the preference of cleaning, not capping, the site.

At the Tuesday meeting, community members opposed to the plan packed the council chambers, many holding colorful posters and orange signs that read: “No Sell-out! Richmond Deserves Better!” The majority of public commenters asked for a return to the full cleanup plan, though representatives from several trade unions spoke in favor of the plan.

The commenters expressed frustration about being given only five days notice on the issue. Many of them said they lived near the site and listed the dangers of storms, earthquakes, and rising sea levels releasing the toxins potentially into the entire bay.

Andres Soto criticized Councilmembers Nat Bates and Demnlus Johnson III, the councilmembers who sponsored the resolution and the only two who weren’t on the council during the July meeting. Soto, like others, said no one was against developing the site. They only disagreed with the method of managing the toxic material.

“Nobody is disputing the need to develop,” Soto said. “But the idea was we were going to clean this up, we weren’t going to do the old Richmond way where you cut a backroom deal, where people’s health is compromised because you want to put some change in your pocket.”

Former councilmember Jovanka Beckles, who approved the full clean-up, criticized a part of the resolution that establishes an intent to buy pollution insurance.

“I tell you no amount of money can save you when you’re infected with cancer or some other life-threatening disease,” she said.

William Shopoff, CEO of Shopoff Realty, said that not only will capping the site cost substantially less than removing the hazardous material, but would also be less intrusive to the rest of the community. He noted that fully cleaning the soil would require the removal of half a million square yards of dirt, roughly equivalent to 65,000 truckloads. The process, he said, would release of toxic particulate matter into the air.

Those opposed to the development chose Sherry Padgett — who owns a business near the site and member of the Richmond Southeast Shoreline Area Community Advisory Group — to speak for ten minutes.

Padgett detailed the toxins present in the area. She said 30 percent of mucksucker fish, which don’t leave the area, develop both ovaries and testes because of endocrine disruptors. She criticized the development plans, and said there should have been discussion of how the money being spent on community benefits could be better used to clean up the area.

Padgett said the councilmembers were voting on a resolution that favored AstraZeneca and Shopoff.

“Our city councilmembers are considering a resolution that is not of, by, or for the people of Richmond,” she said.

Bates and Johnson openly supported the proposal. Bates argued that if the council had listened to those opposed the project in the case of Marina Bay, it would never have been developed.

“This city needs revenue. This community needs jobs,” Bates said. “This is an opportunity for the city to be bold, creative and work with the developer to clean up the site.”

Councilmembers Melvin Willis and Eduardo Martinez opposed the proposal and supported a full cleanup, saying they didn’t want their names attached to the proposed project.

Willis said that though the community benefits sounded great, he had no confidence that a half-cleanup and cap would be sustainable.

“I don’t want to be known as the person who allowed citizens in Richmond to live on top of a toxic waste site,”Marinez said.

Councilmembers Jael Myrick and Ben Choi said there were significant problems with a full cleanup as well.

Willis made a substitute motion to table the item so the community would have a better chance to respond. This motion failed 3-3-1, with Choi, Willis and Martinez for; Butt, Bates and Johnson against; and Myrick abstaining.

The final motion passed 5-2, with Martinez and Willis voting against it.