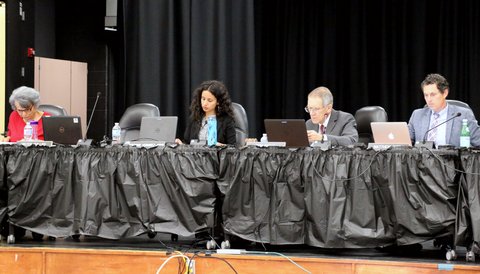 Posted at 03:41h in Education by Pulse Editor 0 Comments

The West Contra Costa Unified School District is facing a nearly $40 million cut for the current school year, first revealed in a recent presentation to the school board.

Tony Wold, associate superintendent of business services for the district, gave a 66-slide budget presentation to the board Sept. 18. The numbers were from unaudited actuals, a year-end snapshot of district finances required by the State Superintendent of Public Instruction. Those numbers, Wold said, represented the only time when an accurate financial picture is available, with all revenues and expenses accounted for.

Besides the estimated $39.9 million shortfall this year, officials predict a $7.9 million cut for 2020-21 school year.

Wold warned the board that the numbers would evoke strong emotional reactions, but he said part of his responsibility was starting with proper communication to mitigate that reaction. He compared it to the various stages of grief.

Wold listed the reasons why the recommended cut was so large, which included yearly increases in pension costs, students lost to charter schools, and low attendance rates — the main source of state funding for school districts.

Wold also listed out the priorities for the district, which included the district’s roadmap 2.0, the dual language immersion program, support for African American students, positive school climate, and Stege Elementary School, as well as making the necessary reductions to the budget.

He also explained how California school districts are traditionally funded and why that funding is at risk. His reasoning referenced a 2018 study by Rutgers University and the Education Law Center, which gave California an “F” grade on its fiscal effort to fund schools.

Public commenters were critical of the district and the board for not recognizing the gap earlier.

“Ever since I was a little girl, my mom has told me actions speak louder than words. Look at what people are doing, not what they’re saying,” Micheletti said. “The actions of this board and superintendent scream to me, they scream that they do not care about the students of this district.”

Board member Mister Phillips praised Wold’s presentation for including a versatile approach of cuts, advocacy, reserves, funding shifts, and investments. He said the district couldn’t merely rely on cuts forever.

Boardmember Stephanie Hernandez-Jarvis said she was concerned about the budget, and she thought that there was more to unpack, including her belief that there had been years of mismanagement the board had to own up to now. She said the cut would be huge compared to the $12.5 million cut made during her first meeting as a board member last year.

“I appreciate positivity and optimism, but I really don’t want to sugarcoat things for ourselves,” Hernández-Jarvis said.

Boardmember Valerie Cuevas said the board’s decisions could only be as good as the numbers they’re given from district staff. She said that part of the deficit was a result of different, and possibly misrepresentative, financial contexts that were given to the board in the past.

Cuevas noted that the cut would equal about 10 percent of the district’s projected $400 million budget this year.

“Our district is a story of needs,” Cuevas said. “Needs that don’t get met because we don’t have the resources for them. And we do our best because we’re generous, and we’re giving and we want to stretch as much as we can.”