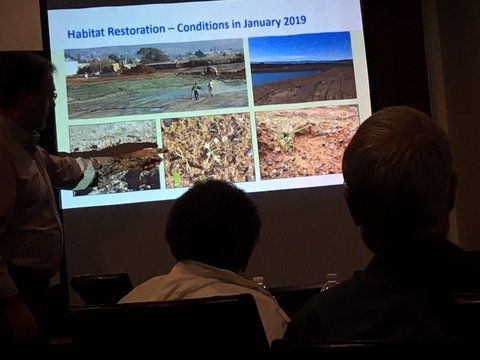 The concerns surfaced at a three-hour meeting of the Richmond Southeast Shoreline Area Community Advisory Group (RSSA CAG) on Oct. 10. Attendees included members of the CAG, the Richmond Progressive Alliance, the public, representatives from the state Department of Toxic Substances Control, and Zeneca.

The Zeneca site, also known as the Campus Bay Site, is a strip of shoreline adjacent to the University of California Richmond Field Station, located between the Richmond Annex and Marina Bay. The area has a history of heavy contamination which persists in the soil, a toxic reminder of the site’s occupation by the Stauffer Chemical Company from 1897 to 1960. After several mergers, the site came under the control of British pharmaceutical giant Zeneca, now AstraZeneca. That company closed the site in 1997.

After a complicated history of cleanup which led to the formation of the CAG, the DTSC took over managing the site in 2005. In July 2018 the DTSC offered a set of options for cleaning up the site to the Richmond City Council. These included Alternative 3A, the DTSC-recommended option of capping the site – placing a cover over the contaminated material. It also included Alternative 6, a full cleanup by removing and relocating half-a-million square yards of contaminated soil.

At the July 2018 meeting, the Richmond City Council unanimously voted to support Alternative 6, the full cleanup. But on Sept. 24 of this year, the council voted 5-2 to support developing an area including the site based on a proposal from Irvine-based Shopoff Realty Investments. That development would come after implementing Alternative 3A – capping the site, not a full cleanup.

As part of that proposal, the investment company promised the city council $52 million in a community benefits agreement with $40 million going to the Richmond Promise scholarship program.

At the meeting Panhandle Annex Neighborhood Council member Karen Franklin said the public had been blindsided by the 5-day notice of the city council item and decision to support developing the site.

Franklin said the council’s haste to support selling the property to Shopoff was shocking and wondered why the site couldn’t be sold to a nonprofit environmental group instead.

“It seems like the train has left the station and it’s just barrelling off, and it’s going to run over us, and we don’t have any say,” Franklin said. “It’s shameful and shocking to me that we have to talk about 3A verses 6 when really we shouldn’t even be doing a development in the first place.”

CAG member Tarnel Abbott asked the DTSC representatives that, if they selected Alternative 6, would the digging and hauling of dirt be made to be protective of human health? CAG member Sherry Padgett said Abbott’s question was because some members of the city council had said dust from removing the dirt could environmentally impact the rest of the city.

Grant Cope, DTSC Deputy Director of Site Mitigation and Restoration, said that if DTSC selected Alternative 6, they would be required to make the process as protective of the community as possible. He said Alternative 6 would entail far more air pollution and traffic impacts because of 60,000 truck loads of dirt needed to fully clean the area.

But the DTSC would be required to implement dust suppression if that option was chosen, he said.

Abbott also wondered whether the DTSC could retain the current deed restriction for the property, which prevents residential development. “I don’t want 3A, but if I have to have it, I don’t want people living on it,” Abbott said.

At the meeting the CAG also received a presentation of the ongoing environmental remediation of the site from representatives of Arcadis, a consulting firm working on behalf of Zeneca to clean one section of the area.

Steven Perry, an environmental scientist for Arcadis, gave a presentation on the cleanup of one section of the site, “Habitat Area 2.” Perry said full restoration will be completed early next year. The remediation includes excavation and disposal of roughly 45,000 cubic yards of soil. When completed it will be subject to a five-year review.

Although response to the presentation was largely positive, Padgett complained about the five-year review process. She said many other five-year reviews, such as those done for Marina Bay, didn’t actually tend to get approved every five years.

“Steven was talking about the rigor of the five-year review,” Padgett said. “Well yes, it can be rigorous – when it happens.”