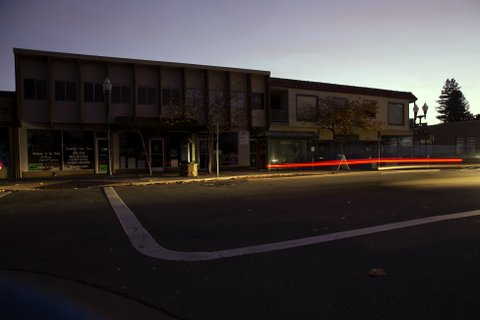 28 Oct A Taste of the Climate Apocalypse to Come

Above: Cars drive through darkened streets in Novato, Calif. during PG&E’s Marin County power shut down on Saturday, Oct. 26, 2019.

At the beginning of October, my kids’ preschool informed me that it might be closed the next day because of rolling blackouts — a radical new effort by our local power utility in Northern California to avoid sparking wildfires. The water company, faced with the shutdown of its pumps, asked us to fill our bathtubs before the cutoff. On the advice of experts, my car was backed into the driveway for a quick escape, its hatch packed with 7 gallons of water and a go-bag including leather gloves, breathing masks, spare clothes, headlamps and emergency food.

The National Weather Service was predicting 55-mile-an-hour winds, with 10% humidity. It was like living inside a ticking time bomb. And so, in a desperate attempt to avoid detonation, the utility decided to haul almost 800,000 households backward through time into premodernity, for days at a stretch. Around Silicon Valley, residential areas adjacent to some of the most technologically advanced corporations in the world — the offices of private space-exploration companies, internet search engines, electric vehicle manufacturers — would forgo basic electricity.

The blackouts solved nothing, of course. De-energizing the electrical grid is a bludgeon: imprecise, with enormous potential for collateral damage as people deal with a darkened world. It doesn’t even eliminate fire risk. What it largely does is shift responsibility away from Pacific Gas & Electric, the state’s largest utility company, whose faulty transmission lines had been found to have caused some of the most destructive wildfires on record.

In fact, cutting power can exacerbate some fire risks. In a blackout, more people rely on home generators, many of which have been installed without permits and might be no less faulty than the utility’s own equipment. Detours and gridlock force more cars into vulnerable places. (Sparks off roadways are another top cause of wildfire.) The blackout makes it harder for the public to respond to fire emergencies even as it does little to prevent all the other factors that cause them — from careless barbecues to tossed-out cigarette butts to plain old arson. One of the state’s most serious fires so far this year was ignited by burning garbage.

But a mandatory blackout does have one radically positive effect. By suddenly withdrawing electrical power — the invisible lifeblood of our unsustainable economic order — PG&E has made the apocalyptic future of the climate crisis immediate and visceral for some of the nation’s most comfortable people. It is easy to ignore climate change in the bosom of the developed world. But you can’t fail to notice when the lights go out.

Only once the blackouts began to take effect did local agencies and governments seem to begin to grasp their rippling effects and implications. As the city of Oakland prepared to lose power, its Police Department — already strained by understaffing and rampant corruption — called back its off-duty officers and put its investigative units into uniform in the hopes of managing a city in the dark. Transportation officials prepared to close four tunnels that make up one of the Bay Area’s major highway arteries, effectively walling off thousands of people from their jobs in downtown Oakland and San Francisco.

As the lights went out across the region, the economies of whole towns and small cities ground to a halt. Grocery stores and gas stations closed, air conditioning was shut off and cell towers faltered — even as the cellphones themselves, now many households’ only means of communication, slowly began to lose battery power. People whose lives depended on home medical equipment faced life-threatening emergencies, and cars — without operating gas pumps — risked running out of fuel. My own town sat on the edge of an arbitrary boundary. The lights stayed on, but the mood was ominous.

And it ought to be. In the American West, our climate will only get hotter and drier, our wildfires worse. Every year more places are going to burn, and we will, repeatedly, be horrified by the losses. But we should not be shocked by them. The blackouts have laid bare the uncomfortable fact that the infrastructure we’ve built and maintained over the course of many decades isn’t matched to the threats we face in our rapidly unfolding climate emergency.

The safest way to proceed under such circumstances — on an annual basis, every time the thermometer kicks up and the winds begin to blow — is probably not simply to forgo the use of one of civilization’s most elementary and essential innovations. Significantly lowering emissions, reducing waste, managing our landscape and fortifying our communities would all do much more to save lives. But it’s hard to imagine that even deep-blue California will make sufficient progress on the climate-adapting steps we’ve long been implored to take.

At least mandatory blackouts force a glimpse into this new reality. They’re like a thin wedge opening our minds to the fact that even here, in the heart of one of the wealthiest regions of a state that is (we are often reminded) by itself the world’s fifth-largest economy — one that is shepherding into existence some of the nation’s most enlightened and aggressive climate-adaptation policies — deep and unpredictable consequences are unavoidable. Perhaps if blackouts were mandated in your community, your neighbors might awaken to this eerie truth as well.

ProPublica is a Pulitzer Prize-winning investigative newsroom. Sign up for The Big Story newsletter to receive stories like this one in your inbox.

This article was co-published with The New York Times Magazine.