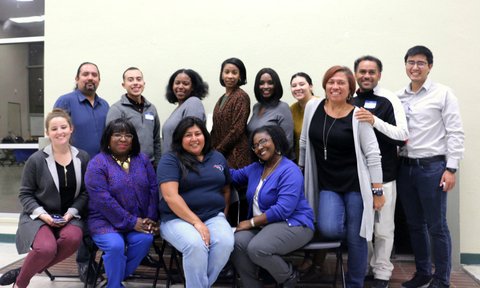 Posted at 19:04h in News by Pulse Editor 0 Comments

The Richmond racial equity team says accountability from city staff and communicating better with the local community are needed to achieve its goals of advancing past racial equality to include equity.

The team is one part of the Government Alliance of Race and Equity (GARE) cohort, a national network of 129 government agencies, 20 in the Bay Area, and joint project of Race Forward and the Haas Institute for a Fair and Inclusive Society — organizations focused on examining problems of race and racial equity. Richmond joined GARE in 2016.

Trina Jackson, who leads the GARE team, kicked off their Oct. 29 meeting, attended by roughly 25 people, with a short presentation on racial equity and explained what the team had achieved so far. She noted that, perhaps most significantly, the team pushed the Richmond City Council to apply a racial equity lens in decision making, which the council adopted in a December 2018 resolution.

“At this point in time, we feel we have to move past equality to equity,” Jackson said. “The wheel has moved slowly, but we have made progress.”

Jackson compared equity with equality by using two images of four people riding bicycles. In one meant to represent equality, each person rides a bicycle of the same size, but because of their different sizes, only one person is able to ride comfortably. One isn’t able to ride at all. In the picture depicting equity, each cyclist rides a bicycle that fits their needs.

Jackson says racial equity is important because institutional and structural racism continue to operate in society.

Institutional racism, Jackson said, is when organizational programs work solely to the benefit of white communities. Structural racism, she said, occurs within an interplay of policies, practices, and programs from multiple institutions result in poorer outcomes and conditions for communities of color when compared to white communities. In other words, structural racism refers to the way a society is built to create and deepen racial disparity.

Jackson briefly explained the history of redlining — the denial of services to specific neighborhoods or communities, often connected to race — to provide an example of both institutional and structural racism.

When the Federal Housing Administration launched a mortgage lending system in 1934, she said, neighborhoods were zoned to let banks know which areas were safe loan targets and which weren’t. Predominantly black neighborhoods were marked in red to identify them as risky, harming them for generations.

In 1968, the Fair Housing Act banned racial discrimination in housing, but the lingering effects of redlining remain today. In Baltimore, nearly every area marked in red in the 1930s remains low-to-moderate income, according to The Washington Post.

Jackson says racial equity involves eliminating “racial disproportionalities so that race can no longer be used to predict success, and we increase the success of all communities.”

After Jackson’s presentation, the meeting centered around discussing four racial equity goals, which were printed on large sheets of paper and posted in separate corners of the room alongside suggested action items for the city council.

The goals included internal work where city employees understand and are committed to achieving racial equity, and community engagement so residents view city government as effective, inclusive, and engaging. It also included the city becoming an employer that promotes racial equity in contracting and procurement. And last, but not least, healthy life outcomes that eliminate racial disproportionalities.

Attendees were asked to place circular orange, pink, yellow or green colored stickers — orange as most important, descending to green as least important — on the action items they felt were the most important for achieving the stated goals. Then attendees broke into four groups and discussed the goals and what needs to happen to achieve them.

LaShonda White, administrative chief in city administrator’s office and a member of the GARE team, summarized the group’s findings by saying accountability was key in engaging the community in new and creative ways — and identifying leaders both in and outside neighborhood councils — so the community can give feedback.

The discussion also included making sure the makeup of boards and commissions represent the demographics of Richmond, ensuring that the new city manager is fully informed about GARE, and exploring new ways to reach out — like with YouTube videos and social media — to the community.

“We are going to go back and digest all of this internally,” White said. “I want to thank you all for your time.”

The GARE team plans to incorporate feedback into the draft racial equity plan, which will eventually be presented to the Richmond City Council for review and adoption.

Government Alliance of Race and Equity