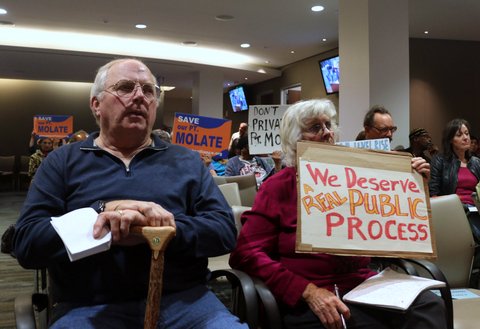 Posted at 22:05h in City Government by Pulse Editor 0 Comments

But getting there proved to be a challenge Tuesday, following a comment from one councilmember who said those objecting to development at Point Molate didn’t even live in Richmond.

The new language clarifies that a judgment settling a long-running lawsuit doesn’t grant entitlements, or guaranteed access to benefits, financial or otherwise, for developing on Point Molate.

The current controversy stems from a 2012 lawsuit filed by the Indian tribe Guidville Racheria of California and Upstream Point Molate. The two groups were hoping to build a casino on Point Molate, but Richmond voters rejected their proposal in a 2010 advisory referendum vote.

The lawsuit alleges the developer spent millions of dollars to obtain agreements to build the casino and the city then breached that agreement. The city settled with Guidiville and Upstream in April last year.

The city is required to build at least 670 units of housing in the region or sell the land back to the developer for $300. In both cases the profits from selling the land will still be split between the city and Guidville and Upstream.  The city council voted to enter an “exclusive right to negotiate” agreement with developer SunCal for Point Molate in April.

In a separate lawsuit, a coalition of residents and others claim the judgement settling the original lawsuit had included entitlements to develop at Point Molate, which the city disputes. They contend city officials violated the Brown Act — a state law which requires elected officials to meet openly — by voting on a settlement, which allegedly included entitlements, in a meeting closed to the public.

The amended judgment includes language that says there are no entitlements for development at Point Molate.

The vote to amend was 4-3, with councilmembers Jael Myrick, Melvin Willis and Eduardo Martinez voting against. It came at a raucous meeting Tuesday, where roughly 20 speakers, many holding signs, almost all spoke against development at Point Molate while asking the council to reconsider the entire process.

Mike Parker, a member of the Richmond Progressive Alliance steering committee, compared the proceedings to making a cake without all the ingredients and trying to add them in after the cake was done baking.

Tarnell Abbott said it was too dangerous to build housing next to the Chevron refinery with only a two lane road out — a possible fire hazard. She said building housing wasn’t the only option and called on the council to consider public input when negotiating the settlement.

“You cannot fix your Brown Act violation by changing a few words in your settlement agreement that you made behind closed doors,” Abbott said.

Councilmember Nat Bates pointed out that the majority of the space would remain open the public, but also argued for the financial benefits from the development.

Bates also claimed that many of the dissenters didn’t live in Richmond, a statement he later partially recanted.

The crowd’s outcry and pushback following the comment was so great that Mayor Tom Butt ordered the police to intervene. Though officers appeared, the room wasn’t cleared. After a five-minute recess, the council voted down a motion to adjourn the meeting and continued on.

Myrick said he would be voting against the motion to amend the judgement not because he believed the city had violated the Brown Act, but because he was frustrated and shared many of the community’s concerns.

Martinez said he’d been deeply disturbed by how everything came to be.

“In my view, the process has been corrupted that I believe a record should be made of closed sessions, so, in the future, the public can know what their elected officials voted for and said,” Martinez said.

Butt said he’d been dealing with Point Molate for 25 years, and that he didn’t think more public hearings made sense. He said he saw this issue as a fundamental disagreement from 20 or 30 people in the room, and they represented only a fraction of people in Richmond.

“There have been literally hundreds of meetings and hearings on Point Molate,” Butt said. “I cannot imagine that there’s any new information out there. There can’t be. Everything that could be said about Point Molate has been said in the last 25 years.”

The council also held the first of five public hearings on the city’s move to district-based elections, and voted to add three town hall meetings to help educate the community on the issue before Jan. 20, the deadline by which the council must pass an ordinance.

The process of switching to district elections kicked off on Oct. 22 when the council voted to establish their intent to switch. That move resulted from a September letter sent from Walnut Creek attorney Scott Rafferty that claimed the city’s at-large voting system was racially biased and therefore violated the California Voting Rights Act (CVRA) of 2001.

If the city had hadn’t voted to switch to district elections within 45 days of the letter, a lawsuit from Rafferty or another attorney was likely to have ensued. No public jurisdiction has won a CVRA lawsuit, and damages can run into the millions of dollars. Earlier this year, the West Contra Costa Unified School District paid Rafferty $318,000 in a settlement of a CVRA lawsuit.

The city is required to hold five public hearings by Jan 20 to meet the criteria of the CVRA “safe-harbor” provision, which caps Rafferty’s recoverable legal fees at $30,000.

The hearing included a presentation on mapping technology — available for the public to use on the city website — from Shalice Tilton, a consultant from the National Demographics Corporation. Tilton said the first two hearings will help develop criteria for creating the proposed districts. The next two public hearings will be on shaping the maps themselves, drafts of which are due by Nov. 20.

Much of the council and public comment revolved around a distaste for Rafferty’s move in forcing the city to move to district elections, though some said they agreed with them in principle.

About ten people spoke during the public comment period, when councilmembers asked Rafferty questions. Bates asked him about the historic racial diversity of the council, but Rafferty responded that district elections weren’t about the incumbents — they were about areas represented.

“Let me just give an opinion, I think this is terrible,” Bates said. “There’s no respect for what Richmond has represented. We’ve always had diversity.”

Butt voted against the motion, saying he thought the town hall meetings would get in the way, but Martinez said the council would best represent the people by listening to what they have to say. The motion passed, with only Butt voting against it.

The next hearing is scheduled for Nov. 19.