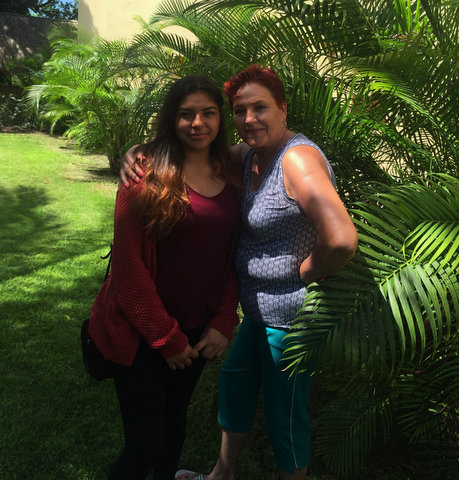 11 Nov My Grandmother Is the Rock of Our Family

Posted at 03:19h in Women, Youth by Pulse Editor 0 Comments

In a small apartment in Richmond, I wake to the smell of vanilla atole and conchas, a Mexican sweet bread. I walk to the kitchen and see my grandmother’s blazing red hair and her hand-knitted scarf around her neck. Getting closer, I can smell her Ponds lotion. “Buenos Dias mija, ya lista para la escuela?”

My grandmother is a goddess.

Her name is Maria Del Refugio Marquez Garcia. She is in her late 60s and had eight children: seven girls and one boy. She grew up in a city called San Juan De Los Lagos, located in Guadalajara, Jalisco, and raised my mom, aunts, and uncle in Tonala, Mexico.

I’m not exactly sure how my grandparents met, but my mom has told me that they married and had kids right away. My grandfather, Lamberto, was in his 20s when he, unfortunately, lost his eyesight after being shot in the eye.

My grandmother raised those eight children with a blind spouse and worked hard to help them have good lives. She wanted them to go to the U.S. and work, so she had her children working at a young age.

My mom used to tell me stories about her and her siblings selling small handmade clay fruits and veggies as decoration for customer’s kitchens. I will never forget the smell of hot glue guns and paint that I first experienced when I visited my mother’s childhood home in Mexico when I was 5.

All of my aunts and uncles have since come to the United States while my grandmother stayed behind in Mexico.

My mother came to the U.S. with my father in the late 1990s. She came through with my father’s work visa, and they built their lives here from scratch. My grandmother stopped talking to my mom during those first couple of years because, as one of her older children, she had wanted her to remain in Mexico to help raise the others.

My aunts and uncle left soon after my mom. Three of my aunts went to South Carolina to start their lives with their husbands, another two and my mom came to California.

My uncle and one aunt stayed behind in Mexico to take care of my grandparents. Each and every one of my aunts has children of their own, except for my uncle who is in his late 20s and recently married. They have good lives they built themselves.

After long enough — including the birth of a grandchild — my grandma came to her senses and began to talk to my mom again. She even came to the U.S. on a three-year visa and ended up staying six.

During that time in the U.S., being with the children she raised, my grandmother’s mother — my great grandmother — died of pancreatic cancer, which had taken a toll on my whole family.

My grandfather passed away in 2015 at the age of 67 following a year-long battle with pancreatic cancer. My aunts, uncle, and mother could not believe it, and my poor grandmother couldn’t do anything about it. She was still in the U.S. on an overstayed visa, so if she went to Mexico, she couldn’t come back.

To this day, my grandmother still regrets not leaving the U.S. to be by her dying husband’s side in Mexico.

Now happily living in the town she grew up in, my grandmother has no intentions of coming back to the U.S. She wants to open a small stand in her town’s plaza, selling hand-sewn decorative hand towels.

The last time I saw my grandmother was during a three-week stay last December. In those three weeks, she told me many things that I never knew, like details my mom and aunts left out from their conversations, as well as her side of the stories my family told about her.

My experiences with my grandmother in Mexico are always full of stories she tells, passing down her wisdom. I find it so magical and comforting. Listening to her stories always makes me smile, cry, or both, but always in a good way. I hope to visit her one more time before I go off to college next year.