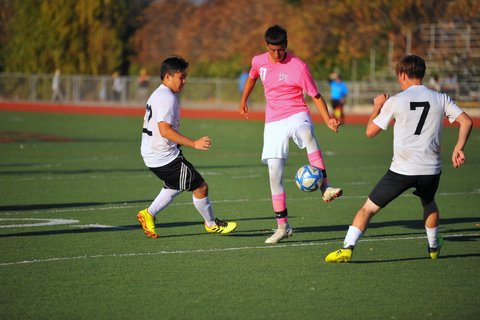 Posted at 23:38h in Sports by Pulse Editor 0 Comments

“We are pushing each other to become better,” Marlin midfielder Angel Ayala said.

That’s been evident in the Marlin’s varsity teams for the last five years.

Making Waves Academy, a charter school in the Hilltop District of Richmond, has excelled in the NCS fall tournament since 2014 when they played in the Division 3 play-off finals.

The Marlins lost that year, but moved up to Division 2 the following year when they made it to the finals, but ultimately lost to Urban School of SF 2-1 in overtime. Then in 2016, 2017 and 2018 Making Waves played their way to the Division 2 finals only to succumb to their opponents.

But their efforts — playing five consecutive NCS finals in a row — have not gone unnoticed.

This year, Making Waves (16-3-1) placed in the Division 1, Marlins coach Barry Argueta said, adding the team can win it all if they’re consistent.

In Saturday’s game, the Marlins showed their defensive prowess by keeping the Panthers at bay, Marlins defender Isaias Perez said. “Our defense is our strongest line,” he said.

Striker Isoken Aigbuza says the Marlin’s style is short passes, but they didn’t use them in the first half. Instead, they played it safe by passing long and playing on the sides of the field.

Aigbuza said the team expected McKinleyville to use their physicality to come out strong in the first half.

This led to Aigbuza, Perez and left midfielder Iovanni Villalobos, among others, to keep pressure on the sides. There were multiple shots at Making Waves goalkeeper Ethan Shelly toward the end of the first half, but none equated to a goal.

At half, Argueta, along with the other coaching staff, stressed the need to transition to short passing. Soon, Ayala, a 14-year-old freshman, was substituted in to make those moves.

“My job is to distribute the ball and calm the game down,” he said.

The McKinleyville squad had shot on goal and was pushing up the field as their fans and their bench became rowdy.

That was until Aigbuza scored the first goal in the 13th minute of the second half.

Aigbuza, who showed apparent frustration at his missed shots, received a throw-in ball, turned 180 degrees, and kicked the ball straight to the Panther’s goalkeeper, who deflected the shot but couldn’t stop it from going into the goal.

After that, the Marlins continued to make smarter passes and play better.

Seven minutes later, Aigbuza ran up the center of the goal box with two opponents defending him. Aigbuza kicked the ball between the two players and scored the second and final goal of the game.

“In the second half, there was a momentum shift,” Aigbuza said. “We were smarter and uplifted each other.” 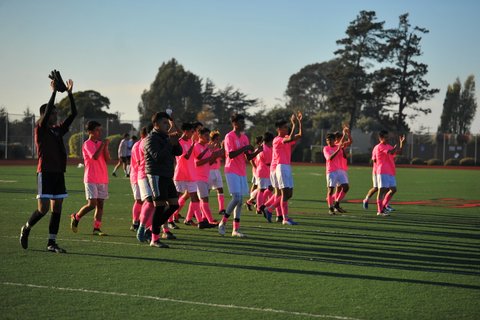