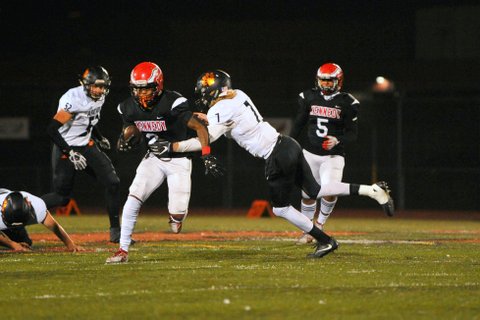 Posted at 22:10h in Sports, Youth by Pulse Editor 0 Comments

A 35-6 win over the Arcata High Tigers advanced the top-seeded Kennedy High Eagles (10-1) into the North Coast Section Division 6 semi-finals.

“I am proud of you, and I don’t want this to end,” Kennedy head football coach Greg Marshall told the Eagles after Friday’s game.

But he warned his players that the next level — the semi-finals against the Justin-Siena Braves — will be more challenging and their discipline throughout the week’s practice will define their chances.

Marshall said the Eagle’s offensive errors, like how quarterback Bobby Williams threw three interceptions, could cost them a game.

“It starts at practice, and I just have to come out stronger next week,” Williams said.

Eagles defensive lineman Sateki Lavulo said, initially, the offense wasn’t connecting and their defense was giving up inside running lanes to the Tigers’ ground attack.

“We underestimated them,” Lavulo said.

The Tigers utilized their running, rather than passing the ball, because of the Eagles’ stifling pass defense. In the first quarter, the Eagles defense deflected a Tigers’ pass. Not long after, another pass was intercepted.

“They have a lot of athletes and they have speed in the back end,” Tigers head coach Jamal Jones said. “We are big up front, so we tried to use that to our advantage.”

Jones said his team was “grinding” in the first quarter, “but Kennedy’s team made some great adjustments.”

By the end of the first half, the Eagles defense was able to close up and halt the Tigers assaults, while their offense put up 21 points.

Eagles kicker Luis Ochoa kicked the extra point for each touchdown made in the game.

In the second half, Young was able to score two more touchdowns: a 32-yard rush and a 23-yard rush. But Young injured his right foot during his last touchdown run in the third quarter, which took him out of the game.

Tigers running back Kein Mazzotti scored an 8-yard rush touchdown in the third quarter after his teammate, Carson Tucker, intercepted the ball by the 50-yard line and rushed it near the Eagle’s 9-yard line.

Lavulo said while his teammates “clicked” back into the game and held the Tigers to the single touchdown, the expectation is to not to get scored on. Even once.

The Eagles (4-1) semi-final game against the Justin-Siena Braves will be at 7 p.m. Nov. 22 at Kennedy High School. Justin-Siena (3-3) is ranked fourth in Division 6.

Lavulo said the Eagles expect to win that game and the D6 NCS championship.

“We are going to work hard in practice and dominate,” Lavulo said. 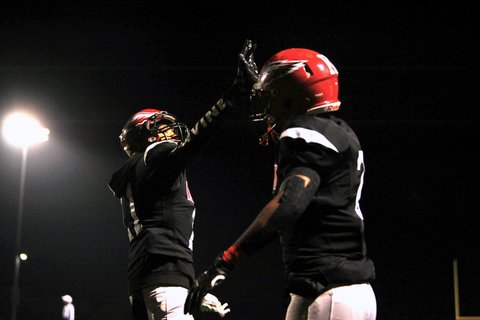