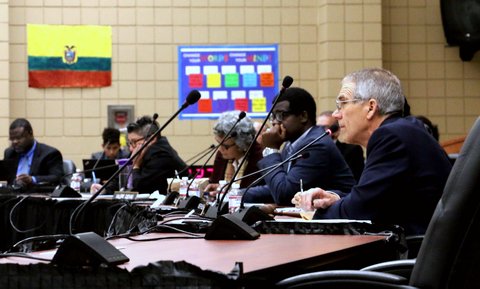 18 Nov WCCUSD Board Takes No Action Against Superintendent Duffy

Posted at 00:56h in Education by Pulse Editor 0 Comments

The West Contra Costa Unified school board took no action during a closed session meeting on Nov. 15, which a board member had publicized that was about terminating the contract of Superintendent Matthew Duffy.

At the end of a roughly 3.5 hour meeting, board president Tom Panas read a statement from the board: “The purpose of the meeting was to consider the performance of the superintendent and to consider if the board would take any action. The board unanimously agrees that it will not take any action at this time.”

The agenda, which was posted shortly after midnight Nov. 13, only mentioned a performance evaluation for Duffy.

On Nov. 11, board member Mister Phillips created a Facebook event announcing the meeting days before the agenda was posted and a location was chosen.

“I believe that President Panas will attempt to terminate the superintendent at this meeting,” Phillips said in his post. “Although the superintendent and I have our differences, I believe terminating him in the middle of a fiscal recovery plan is irresponsible and will only make matters worse for the district.”

In an interview Nov. 12, Panas said he couldn’t say if the meeting was about terminating Duffy’s contract.

Phillps wrote a follow-up post on his blog after the meeting agenda had been posted. In it, Phillips expanded his argument, arguing that the board wouldn’t be able to solve the district’s roughly $48 million deficit without a superintendent. He also said it would cost more than $500,000 to buyout Duffy’s contract if he was terminated, and that the district “would most likely lose” a $7 million grant from the Hewlett Foundation the district had just applied for.

“It would be unwise to terminate the superintendent at this time,” Phillips said. “The board only has seven months to fix the [deficit] problem.”

The day before the meeting, the United Teachers of Richmond released a statement advocating for transparency and accountability and criticized the lack of communication from the board. The union argued against terminating Duffy, if the rumors were true, saying he should be held accountable by helping to fix the budget. The statement also said that a leadership change in the middle of the school year would destabilize the district further and should only be considered with a clear, structured timeline.

The statement also argued against board “infighting,” and said the issue should have been kept private to protect Duffy’s privacy. As a result of the events this week, the statement said, Duffy may choose to leave the district sooner, as he knows some board members have lost confidence in him.

“If the purpose of the meeting was to fire the superintendent, then we find the timing of this to benirresponsible and disrespectful to staff and families who are working incredibly hard at all our school sites at a time when we need stability, not uncertainty,” the statement read.

Board member Consuelo Lara also told EdSource that she expected the meeting was called to discuss terminating Duffy’s contract.

About 50 people attended the meeting Nov. 15 and the majority of the dozen who spoke during the public comment period favored retaining Duffy, citing the district’s budget deficit.

Tresa Smith, a district teacher, said much of the responsibility for the $48 million deficit rested on the board, as well as the superintendent. She said it seemed there’d been a breakdown in communication, which disappointed her because the impacts trickle down and negatively affect students.

“The students have their trust in teachers to do what we think we can do best,” Smith said. “We put trust in our leaders, and as a voter, I put my trust in the school board to make sure that they are keeping an eye on things going on at the district level.”

Smith said she felt it’s the school board’s responsibility to uphold checks and balances with the superintendent and the district.

Tiffany Snowhite, a district parent, said she thought everyone in the area needed to treat one another better. She called for a greater focus on finding solutions rather than pointing fingers, and urged everyone to make the process about children, not politics.