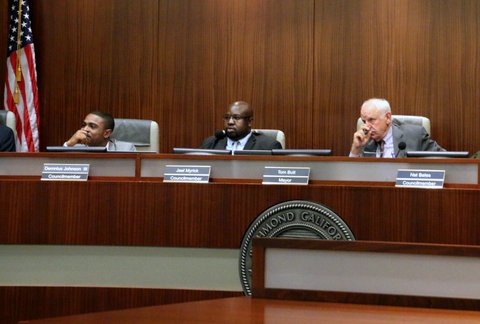 Posted at 20:00h in City Government by Pulse Editor 1 Comment

A controversial ordinance that would have given renters first opportunity to purchase property they live in – if put up for sale – has been set aside.

The Richmond City Council unanimously voted Tuesday for city staff to cease drafting a “Tenants Opportunity to Purchase,” or TOPA, ordinance, after approving the drafting in September. Councilman Melvin Willis was absent from the council meeting.

Though the concept of drafting of the ordinance met with minimal resistance at the council’s September meeting, residents’ opposition to TOPA was clearly evident Tuesday.

Property owners, landlords and some renters spoke opposing TOPA, targeting the language used in a template ordinance. Many advocated for creation of a housing commission representing all interest groups to provide oversight.

No one spoke in favor of moving forward with TOPA.

Richmond resident Leisa Johnson said that in any form, TOPA would be unacceptable. She said those opposed would do whatever was necessary to squash any future proposed version of it.

Mike Parker, of the Richmond Progressive Alliance steering committee, said though the resolution was a mistake, the problem remains real. He said gentrification and displacement of longtime Richmond residents is ongoing and the council will eventually have to address it.

The council originally supported drafting the ordinance except for Mayor Tom Butt. But at Tuesday’s meeting councilmembers said their opinions about TOPA had soured.

Jael Myrick, who put forward the original ordinance – as well as the item to cease drafting it – apologized to property owners. He said he’d asked people from the East Bay Community Law Center, where he works, to provide a template TOPA ordinance. But he erred up by not removing troubling aspects of the template ordinance. Even though the template was never intended to be the final version, it never should have been made public, he said.

“Let me very clear about my motivations,” he said. “The issue of displacement and gentrification and housing instability is one that none of us have any answer to,” Myrick said.

Tim Higares, Richmond director of infrastructure and maintenance operations, gave a presentation to the council on blight. Several contributing factors — illegal dumping, an increase in the homeless population, failing infrastructure — have increased while staffing has fallen, he said.

“When I got here I was proud to say we were very proactive,” Higares said. “We’re 100 percent reactive now.”

In 2007, the city had 16 fulltime employees dedicated to abatement. Today, they are nine. Code enforcement has fallen similarly. Parks and landscaping staffing have risen only by one fulltime employee since 2007.

Higares also said there are 2.5 employees assigned to tree maintenance, too few to cover more than 40,000 trees in the city.

Gregory Everetts, president of the local SEIU 1021 Richmond chapter, and a member of the tree crew, praised Higares’ presentation.

“The writing’s on the wall,” Everetts said. “My members are getting hurt because we’re understaffed.”

“We are teaching a really bad lesson when we keep picking up the trash and there’s not enough enforcement,” Robinson said. “We’re actually training people that you can dump in Richmond.”

The council held the second of five required public hearings on the city’s ongoing move to district elections. Map submissions are due Nov. 21, and will be discussed at the council meeting, on Nov. 26. A process of revision will begin wrapping up Jan 20.

The process began when the council was sent a demand letter in Sept. from a Walnut Creek attorney alleging the city’s at-large election system — where councilmembers are elected by city-wide popular vote — is in violation of the California Voting Rights Act of 2001 (CVRA). In response, the city is moving to begin holding district elections. Each councilmember will be elected from separate regions of the city. The regions are currently being drawn.

To meet a legal provision that caps the city’s liability for legal fees to $30,000, the council has worked under a tight timeframe. They were required to vote on their intent to enter into district elections within 45 days after receiving the demand letter, and to go through the rest of the process — including community engagement, mapping, five public hearings, and passing an ordinance — with only 90 days after that.

A series of informational workshops have been held by the city to gather input. Two more community workshops to discuss the maps will occur on Dec 5 and Dec 10.