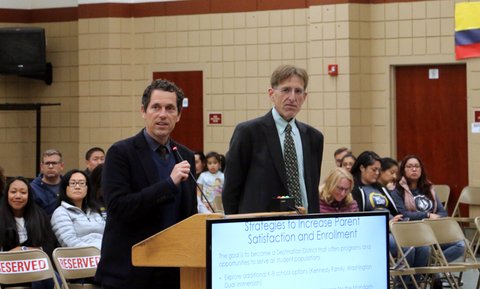 Posted at 17:50h in Education by Pulse Editor 1 Comment

A $575 million school construction bond will be landing on the March 2020 ballot following a supermajority vote Thursday from the West Contra Costa school board.

Money from bonds are used for brick and mortar projects, including construction and renovation of school facilities. This means the bond, if passed, could not be used to fill the district’s $48 million budget deficit, but rather improve school infrastructure.

Tony Wold, director of business services for the district, explained that putting the measure on the March ballot would give the board the most flexibility. Depending on if it passes, it could give district officials information regarding potentially placing a bond measure or parcel tax before voters in November.

The bond will require a 55 percent voter approval to pass.

Most of the board indicated their support for the measure without reservation. Board member Valerie Cuevas, the most vocal supporter of the measure, said that despite the resistance the board is sure to face, she promised to continue to fight for students.

“I’ll take that risk for our kids,” Cuevas said. “Every day, any day.”

Board president Tom Panas, the sole vote against the bond measure, said he supported a November 2020 bond measure, but a March vote would come too fast, particularly because of the limited time to inform voters.

Board member Mister Phillips said he’d gone back and forth on the issue because he’d talked to community members who suffered financial hardship and would be hurt by increased taxes. He said some told him they needed to pick between heat and food during the winter, and they’d chosen to eat.

“I want us to realize when we talk about putting a bond or parcel tax, that this money we’re trying to get, it’s not free money,” Phillips said. “It’s coming from somewhere.”

Phillips also brought up the possibility of a recession in the near future and said raising taxes heading into a recession wasn’t ideal. He said he decided to vote for the bond because he had a vision of investing in the district and attracting more students to offset future budget deficits. For that to happen, Phillips said, the district needed to invest in its school buildings.

Early in the meeting, three charter schools had public hearings, one after the other, to make the case for renewing their charters to the board.

Charter schools must renew their charter petition every five years, but there will be other options after several laws go into effect starting January 1.

Over 250 people crowded the Dejuan Middle School auditorium and filled the chairs, leaving several to stand or sit along the edges of the room. They included a mix of parents, students, and teachers from all three schools, many wearing school-branded shirts and holding signs supporting reapproval of their school.

Before the hearings began, Johanna Pace said it was unusual for three charter schools to be entering the renewal process — which must be completed within 30 days — all at the same time. She pointed out that the board had to read over 95 attachments to prepare for the meeting, which she called “a huge burden.”

The board will vote on the charter school renewals at the two remaining board meetings of the year, both in December.