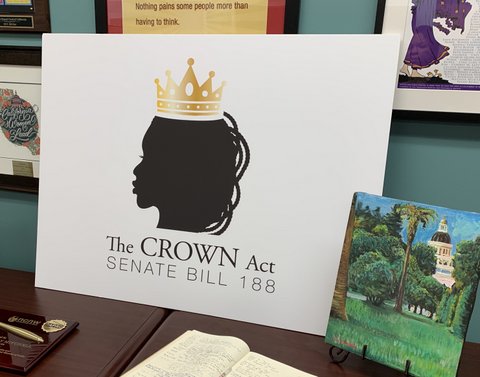 Posted at 03:14h in California by Pulse Editor 0 Comments

On Jan. 1, 2020, California will enact a new law, the CROWN Act or Senate Bill 188, that protects Black women and men from discrimination in the workplace for wearing natural hairstyles.

Gov. Gavin Newsom signed the law, the first of its kind in the nation, in July.

Authored by state Sen. Holly Mitchell (D-Los Angeles), who is African American, the bill expands the definition of racial discrimination to include hair.

“We believe this is just the beginning of the end to hair discrimination. It’s another chink in the armor of racial discrimination in this country and I’m just proud to be part of the movement,” Mitchell said when the governor signed her bill.

Just weeks before the law takes effect, news broke that SAG-AFTRA, the Los Angeles-based labor union representing more than 160,000 television and film industry professionals, is investigating the circumstances of popular actress Gabrielle Union’s dismissal from her job as a judge on the NBC television series “America’s Got Talent,” partly because of her rotating natural hairstyles.

Four sources who claim to have insider information about the way decision makers at the television competition series treated Union say the actress received more than six notes describing her hairstyles as “too black.”

Union, known for her roles in more than 25 films and as the star of the long-running BET series “Being Mary Jane,” has not made public comment about the incident. But her husband, NBA star Dwayne Wade, has tweeted about her firing.

If Union decides to sue NBC or the show’s producers for hair discrimination, she will not be able to stand on the CROWN act, which stands for Create a Respectful and Open Workplace for Natural Hair, because of the timing of her case.

But the show producers have confirmed that they are speaking with Union’s representatives to resolve their differences.

Some Twitter users are calling for a boycott of the show.

Millions of Dollars in Homelessness Aid May Be Coming To Your County, City

Now is the time to start checking in with your city council and county board to inquire how they will allocate millions of dollars in emergency homelessness aid Gov. Newsom has released to counties and cities across the state.

Gov. Newsom said to funnel the $650 million aid package to counties and cities, he had to bypass roadblocks set up by the Trump administration to delay the funding. President Trump has been a vocal critic of California’s homelessness crisis.

The governor announced the unprecedented $1 billion investment in fighting homelessness when he released his budget for the 2019-20 fiscal year earlier this year. The $650 million emergency spending is a part of it.

California law requires local allocation of funding to be based on federally-approved 2019 Point in Time homelessness data. Although local governments and Continuums of Care have requested this data from the feds, they have not yet received it.

The governor said counties and cities can begin applying for and spending 75 percent of the money ($500 million) while they wait on the numbers from the feds.

The governor has appointed Matthew Doherty, who has over 25 years of experience working on federal solutions to homelessness under the Obama and Trump administrations, as an expert advisor to his office and state agencies.

“I am excited to work with Gov. Newsom, who has demonstrated national leadership addressing homelessness throughout his career, and be part of California’s efforts to tackle the issue head on.”

Together, San Bernardino, Kern and Riverside counties, for example, are expected to receive a total of approximately $36 million.

Keeping up with the high cost of pensions in California is hurting public sector employers, city budgets and leading to the firing of some minority money managers at CalPERS, the California Public Employee Retirement System, which is valued at $387 billion, according to Bloomberg News.

In its annual report, released in November, CalPERS confirmed that it risks falling into “low funding levels.” If this happens, the agency responsible for managing the health and pension benefits of more than a million public employees in California may not able to pay its bills or pay out its commitments.

The League of California Cities, which represents more than 400 municipalities across the state, is alarmed by the growing mandatory payments they have to cough up to CalPERS for employee pensions and benefits, too, according to CalMatters. Between fiscal years 2016 and 2017, that number skyrocketed by more 8 billion.

In an effort to streamline its own costs, CalPERS announced last week that it is scaling back on its “Emerging” equity fund program. Launched in 1991 to increase diversity among its portfolio managers, the program contracts external money mangers, mostly women and minority-owned firms managing assets worth less than $2 billion who are charged with investing on behalf of the largest public pension system in the United States.

The returns those “emerging” managers were bringing in fell below the agency’s targets by 126 “basis points,” according to an agency spokesperson.

The Rev. Al Sharpton, President and Founder of the National Action Network, said CalPERS’ decision to cut the minority money mangers is “unacceptable” and comes as a surprise to him.

“Last year, the National Action Network and I met with Marci Frost and Ted Eliopoulis from CalPERS in Sacramento, both of whom committed to increasing the utilization of diverse asset managers across all asset classes by creating a level playing field,” Sharpton told California Black Media. “It is clear that Ted is gone and the board has inoculated the new CIO, Ben Meng, from finding and utilizing high performing talented diverse managers that reflect the diversity of the pensioners.

In an October memo, CalPERS CEO Marcie Frost said the agency is “restructuring” its emerging manager program, “reducing” the number of managers, and cutting the assets those investors manage from $3.6 billion to $500 million.

What Will California Do With Its $7 Billion Surplus?

Next year, expect big fights among state government officials and your representatives in the state legislature about how the huge windfall of cash in the state’s savings account should be spent.

California’s nonpartisan Legislative Analyst’s Office (LAO) recently predicted that the state will have a $7 billion surplus by the end of this fiscal year. The following year, California’s savings account is projected to grow to more than $18 billion.

“As Washington soaks Americans with a trillion dollars in debt to pay for tax cuts that benefit the wealthy and destroys the social safety net, our state is now doing more than ever before to provide opportunity for all California families, especially those who are not equally sharing in our nation’s prosperity,” said Gov. Gavin Newsom, responding to the news.

“We are taking important steps so that growth is broadly shared, doing it all while saving record amounts for a rainy day,” he added.

The LAO is recommending that legislators commit no more than $1 billion of the “estimated $7 billion surplus to ongoing purposes in 2020‑21.”

Last fiscal year, California had a record-breaking $21.5 billion surplus of which the state spent about half on paying down the debt and bolstering reserves. It invested about $4 billion on ongoing projects and used to rest to fund one-time programs, including initiatives to solve the state’s homelessness crisis.

By state law, the governor has until Jan. 10, 2020, to present his initial budget to the legislature.