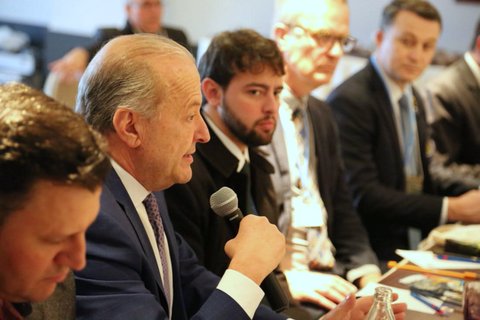 Posted at 22:47h in Environment, World by Pulse Editor 0 Comments

Above: Mato Grosso State Vice-governor Otaviano Pivetta speaks at a gathering of officials and private sector representatives on the sidelines of COP25 in Madrid. (Dec. 11, 2019.)

MADRID – Even as headlines proclaim the recently ended climate talks in Madrid a failure, states in Brazil and across the Amazon are sending strong signals that they are poised to move ahead on forest protection and sustainable development.

Their message was delivered at a pair of gatherings held on the sidelines of COP25, the U.N. Framework Convention on Climate Change annual “Conference of the Parties,” where officials representing nearly half of the Amazon rainforest called for greater collaboration and investment from the private sector.

“The whole world is looking at the center of Brazil,” said Otaviano Pivetta, vice governor for the Brazilian state of Mato Grosso, during a Dec. 11 meeting with Brazilian officials and private sector representatives organized by Earth Innovation Institute (EII). Pivetta noted that with the right infrastructure Mato Grosso can “increase productivity on previously degraded land” while protecting the 60 percent of the state’s territory now covered in native vegetation.

“We will not allow illegal deforestation in our territory,” he exclaimed.

The meeting followed a roundtable on Dec.9 with governors and officials from Peru, Colombia and Brazil, focused on EII’s Tropical Forest Champions initiative, which seeks to facilitate greater investments in regions making strides on forest protection.

Mato Grosso is one of only two jurisdictions worldwide that has ever received pay-for-performance funding for its successful implementation of REDD+ programs, the other being Acre in Brazil’s far west. REDD, or Reducing Emissions from Deforestation and Forest Degradation, refers to the U.N.-backed approach to help fight climate change. Government officials from Mato Grosso and Acre used the meeting to lay out in detail their policies to slow deforestation while supporting economic growth and protecting Indigenous rights.

Their statements stand in contrast to what is being widely described as a failure of nations to agree on a raft of issues, including the regulation of international carbon markets as outlined under Article 6 of the Paris Climate Agreement. Yet as nations grow further apart on these and other positions, governments in the Amazon are seeking greater collaboration and partnership.

“Acre wants to show the world that we have the capacity to preserve what is best, our forests,” Gladson Cameli, Acre’s governor, said. “We have 2 million hectares of cleared land, and there is no need to cut more down.”

But he added that Acre is home to “900,000 people who work hard and want opportunity… and it is up to me to speak up for them.” He continued, “The key word is sustainability, but there has to be a parallel with job creation.”

To date only 3 percent of international funds promised in support of efforts to slow deforestation in the tropics has found its way to jurisdictions. That lack of capital has prompted governors across the Amazon to seek greater investment opportunities from the private sector.

“The market is realizing it has to get closer to governments and producers,” said Daan Wensing, director of global landscapes for IDH, a sustainable trade initiative that helps facilitate public-private partnerships in support of sustainability goals.

Björn Rask Thomsen, CEO of Denofa—Scandanavia’s main soy processing plant for animal feed—pointed out such partnerships have to be built on mutual trust and respect between growers and buyers—between producing and consuming regions.

EII Executive Director Dan Nepstad highlighted the growing number of companies, including online retailer Amazon, that have announced their intention to go carbon neutral, a trend he said will continue to grow into the foreseeable future. “The people in this room are critical for translating the growing private sector commitment to climate neutrality into flows of finance for Acre, Mato Grosso and other regional governments that are striving to achieve low-carbon development.”

Earth Innovation Institute is a not-for-profit, independent research institute with headquarters in San Francisco and programs in Brazil, Colombia, Indonesia, and Peru. We pursue our goals of slowing climate change, conserving tropical forests and fisheries, and improving rural livelihoods by promoting sustainable rural development through a blend of research, consensus-building, policy analysis and reform, and private sector engagement. To learn more, visit: https://www.earthinnovation.org