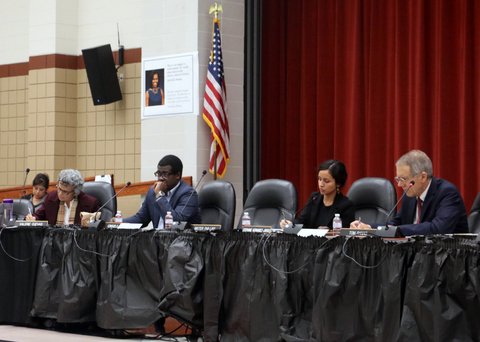 Posted at 01:47h in Education by Pulse Editor 1 Comment

The West Contra Costa Unified Board of Education on Dec. 18 denied to renew the charter for John Henry High School, setting it down a path of potential closure.

The school, which is located in the Marina Bay area of Richmond, currently serves 320 students.

The board voted to deny the renewal 4-1, with board member Mister Phillips voting against.

Denial of the school’s charter renewal was recommended by district staff, who found the petition presented an unsound program for both special education students and English learners. Overall, staff found the school was “demonstrably unlikely to successfully implement the program.”

“The findings and issues raised in this report are egregious,” the report concludes. “The cumulative effect of these concerns outweigh any academic increases and, overall, result in the recommendation of non-renewal of the petition.”

Linda Delgado, the charter school oversight director for the district, listed nine reasons denial was appropriate, including a lack of growth for English learners, a lack of transparency and accountability, a failure to provide a legally adequate special education program, and significant teacher turnover. She said that despite John Henry’s strength in academics, when compared to district-run schools, the negatives of the school outweigh that achievement.

Delgado said school had a rocky history over its five-year existence. The school, she said, has repeatedly run into issues regarding improperly credentialed teachers in classrooms and inadequacies in special education. Last year, the school was threatened with a potential charter revocation after allegations emerged that school leadership didn’t contact child protective services in response to a student’s claims of child abuse.

Delgado also criticized Amethod Public Schools (AMPS), the parent organization of John Henry, for reducing its board from five to three members, making a quorum of only two people.

“The purpose of a governance board, I’m sure I don’t need to tell you, is to ensure oversight,” Delgado said.

A crowd of John Henry supporters urged the board to approve renewal, and over 50 spoke during the public comment period. Many wore yellow shirts with AMPS on the front and “Future Voter” on the back.

Almost every speaker urged the board to renew the charter. Those who spoke were generally affiliated with John Henry or Amethod, such as students, teachers, parents, and Amethod staff.

Eric Munoz — a 2019 graduate of John Henry who is currently studying at UCLA — said the school had helped him succeed.

“I wear John Henry’s ideals and mottos tattooed on my skin because what I got from them was deeper than a high school education,” he said. “They taught me to succeed when the odds are against you. They taught me that everything is possible through hard work, and you should honor your work. This city needs this school, and I’m living proof of what they’re producing.”

Munoz said he personally had nothing to gain from speaking up for the school, as he’d graduated, but he wanted to fight for the students currently attending who he said need the school and the opportunity it provides.

There wasn’t, however, unanimous support for the school.

Don Gosney said there was a lack of transparency in Amethod board meetings, which were often held in the middle of weekdays, with little public notice, and with a lack of access to agenda items. At one meeting, he said, there was neither online access to the items or physical handouts at the meeting.

“How are the public and even the media supposed to question or comment on items when they have no advance notice of the meeting and zero access to the items being discussed?” Gosney said.

The WCCUSD board, for the most part, agreed with the staff recommendation.

Board president Stephanie Hernández-Jarvis said, as a teacher, she understood the gravity of this decision was astronomical, but the staff’s findings regarding special education students and English learners was heavy.

Board member Consuelo Lara said she the school’s leadership made deliberate choices on whether to comply with the law, which led the board to deny their renewal petition.

“When you choose not to follow the law, or not to comply, there are consequences,” she said.

But Phillips said he dissented from the rest of the board because John Henry met California dashboard standards and had recently received accreditation from the Western Association of Schools and Colleges.

WCCUSD board student representative Luke Shalz voted against the renewal. He praised the crowd for fighting for their school, but argued that many students in district-run schools didn’t have adults willing to advocate for them. He said he felt passionately for those students, and would not vote against them considering the financial impact charter schools have on the district as it faces a roughly $48 million budget deficit.

Shalz also said that, as a district student, he was offended by the way speakers had characterized district schools as lesser.

“I commend you for fighting for what you believe in, but I must, too,” he said. “I believe in public education.”