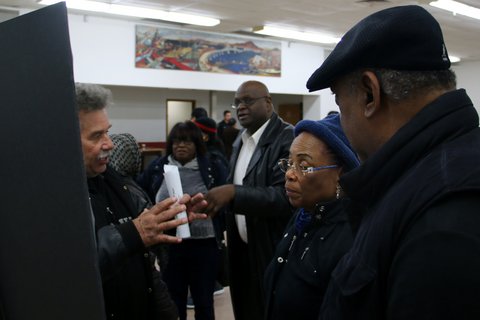 Posted at 17:43h in City Government by Pulse Editor 0 Comments

Richmond held its final community workshop Jan. 6 as it transitions from at-large to district elections, roughly one week before the city council is set this week to select a final map that will determine the region’s new councilmember districts.

Richmond, like several other cities in California, is in the process of switching its voting system for city councilmembers from at-large to by-district. At-large elections are determined by city-wide popular vote, while district elections split the voting region into separate areas where voters select a representative from their area. The mayor will still be elected at-large.

Richmond will be split into six voting districts, one for each city councilmember. Three of these districts will be open for the 2020 election, although which ones have yet to be officially determined.

The impetus for the switch came after Walnut Creek attorney Scott Rafferty wrote a letter in September, alleging that Richmond’s at-large election system is racially biased. He claimed the system dilutes the votes of Latinos and therefore is in violation of the California Voting Rights Act of 2001 (CVRA), which reduced the burden of proof needed for minority groups to assert at-large elections weaken their voting power.

The switch has come rapidly to Richmond. Much of the mapping process has occurred by necessity in the past 90 days because the city wishes to meet a safe harbor provision that will cap fees recoverable by Rafferty to $30,000, a number which falls well below the typical cost of fighting a CVRA lawsuit.

Over 120 cities in California have switched to district elections since the CVRA was passed. When cities have resisted CVRA lawsuits, legal fees have often run into the hundreds of thousands or even millions of dollars. In 2019, the West Contra Costa Unified School District settled a CVRA lawsuit with Rafferty, paying him $310,000 in attorney’s fees. So far, no challenge to a CVRA lawsuit has prevailed.

The entire process will effectively end on Jan. 21, when the council adopts an ordinance establishing district elections. The council is set to select a final map of the districts on Jan. 14.

Douglas Johnson, president of the National Demographics Corporation — who was contracted by the city to help with the mapping process — gave a presentation at the workshop at Veteran’s Hall that explained district elections and how the process has gone so far for Richmond. He then took questions from an audience of roughly 45 people.

After the initial period of questions, attendees were given time to look at, discuss and provide feedback on the five maps that will go before the council Tuesday. They were asked to place red dot stickers on the maps they liked most. Community support was relatively split between all available maps, each getting no fewer than seven dots but no more than 14.

Johnson said one purpose of this exercise was to eliminate maps with practically no support, which he said hadn’t happened at the workshop.

Antwon Cloird gave particular support for maps 103B and 113B, which kept the Iron Triangle as one contiguous district. He said having representation on the council would bring much needed attention to the area.

“That part of our community has been neglected,” Cloird said. “Everything has been built around us in that area.”

Cloird also spoke about how Richmond’s population has changed in the past 10 years, and how the maps — which by law must be based on the most recent census — would misrepresent what the population actually looks like. This means that the maps will need to be redrawn after the 2020 census.

Johnson said, in one way, that was a good thing because often most people in the community don’t pay much attention to public issues until they’ve been decided. People upset with the chosen map would have the opportunity to turn around and give input on the next one, he said.

Mark Wassberg said he didn’t support any of the maps because they were all about race, and their intended purpose was to add more minority representation to the city council, which he disagreed with.

“It’s really not just about race,” Rafferty said. “Any map is likely to have greater accountability to neighborhoods than at-large. Whatever we come up with, I think we can take some satisfaction in that.”