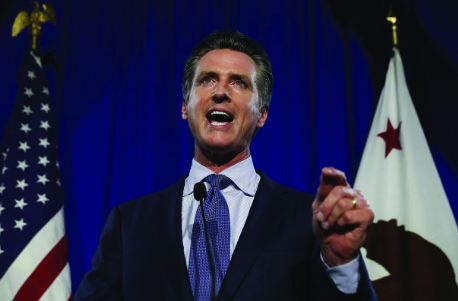 Posted at 19:04h in California by Pulse Editor 0 Comments

Last Friday, when Gov. Gavin Newsom submitted his budget for the 2020-21 fiscal year, he specifically mentioned Black students – the lowest performing group of any ethnic category on California’s standardized tests.

To “increase and improve” the teacher workforce in underserved communities, the governor is proposing a $20,000 stipend for teachers working at what he is calling “high needs” schools for the next four years.

The majority of the lowest performing schools in the state are located in census tracts where there are above-average poverty rates and large concentrations of African Americans, Latinos and other minorities.

Most of those schools with the largest numbers of Black students also have the highest suspension rates among California’s public schools.

Only two percent of African-American children in California attend public schools that are considered “high performing.”

The $20,000-per-teacher annual stipend is expected to cost taxpayers $100 million over the next fiscal year.

Do You Know You’ll Be Fined For Going Without Health Insurance This Year?

Did you know that, starting Jan. 1, it became mandatory to have health insurance in California?

Those who don’t have an insurance plans may have to pay a tax penalty of up to $2,085 for a family of four.

If you didn’t know, you’re not alone.

According to results of a recent survey, 56 percent of uninsured Californians are unaware of the new mandate. The study, conducted by Covered California – the state’s independent government insurance exchange – also “found that avoiding the penalty motivates those with health insurance to keep their coverage and encourages the uninsured to sign up.”

Now, sate officials and community health advocates are encouraging people to get health care coverage as soon as they can.

“I encourage everyone to secure qualifying health care coverage as soon as possible so they are not surprised with a state penalty when filing 2020 state tax returns in 2021,” said State Controller and Franchise Tax Board Chair Betty Yee.

The survey also found that among uninsured people in California, 62 percent are unaware that Covered California offers financial help (that could be as much as $500 a month for middle income families) to help pay for health insurance.

Among those who have insurance, only 27 percent know that the state is offering money to help offset costs for insurance.

In 2018, the federal government rolled back requirements – passed under the Affordable Care Act known as “Obamacare” – mandating that everyone in the country have health insurance or pay a tax penalty.

But last year, California restored the individual mandate which requires most people to get healthcare coverage or pay a penalty. Those earning below the federal tax threshold are not liable.

“You can find out in just a few minutes whether you are eligible for financial help from the federal government, the state, or both,” said Covered California Executive Director Peter V. Lee. “Do not leave money on the table; do not put yourself at risk if you get sick or ill; do not get stuck with a big bill when you pay your taxes in 2021.”

You can find out if you are eligible for a financial subsidy by visiting www.CoveredCA.com online or calling California at (800) 300-1506.

According to Covered California, about 90 percent of Californians will keep their current healthcare plans.

From fighting the state’s homelessness crisis to supporting low-performing schools and cutting taxes on small businesses, Gov. Gavin Newsom made a number of bold proposals in his budget for the 2020-21 fiscal year.

One of the plans that stood out is the state’s effort to rethink incarceration.

Last year, California began investing billions of dollars in programs to help those affected by the unequal policies of the War on Drugs to help – many of them formerly incarcerated – get back on their feet and reintegrate into their communities.

This year, the governor announced he wants to shut down for-profit private contract prisons in the state.

He also wants to transform prisons for youth offenders (25 years and younger), turning them into “campus style” learning environments with mentors, innovative technology and academic partnerships with local colleges.

“California is doing more than ever to tackle these challenges and this budget builds on that work with new investments and ideas to take on these longstanding issues,” Gov. Newsom said.

Although the state still has to draw up, or finalize in some cases, plans to implement the proposals the governor is making, some lawmakers have begun to give the policies high marks already.

“Gov. Newsom released a comprehensive budget proposal that will benefit Californians statewide and locally. It’s a good start and I look forward to the transformative changes that the Governor wants to set in motion,” said Assemblymember Mike A. Gipson (D-Carson).

New plans to consolidate licensing in the state for cannabis-related businesses may lower entry barriers to the potentially lucrative industry for interested entrepreneurs.

By July 2021, the state plans to roll into one three licensing entities that are currently housed at different state agencies: the Bureau of Cannabis Control, the Department of Food and Agriculture and the Department of Public Health.

According to a joint statement the three agencies shared with California Black Media, the Newsom administration will share more details about the plan by the Spring of this year.

“Establishment of a standalone department with an enforcement arm will centralize and align critical areas to build a successful legal cannabis market, by creating a single point of contact for cannabis licensees and local governments,” the statement reads.

Besides easing regulations, the state also plans to simplify taxation of the marijuana industry.

“The proposed changes move the responsibility for the cultivation excise tax from the final distributor to the first, and for the retail excise tax from the distributor to the retailer,” the statement goes on. “Moving the incidence of this tax to the retailer will eliminate the California Department of Tax and Fee Administration (CDTFA) requirement to estimate product mark-up and set wholesale tax rates. The changes will reduce the tax collection burden on the cannabis industry and simplify the tax collection process.”