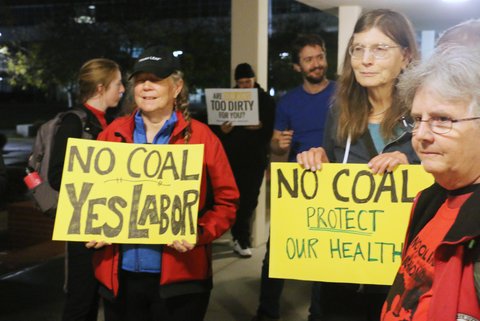 Posted at 18:17h in City Government by Pulse Editor 0 Comments

Richmond city council is set to vote tonight on a highly contentious decision to possibly phase out coal storage in Richmond.

The proposed ordinance would give Levin-Richmond Terminal Corp. three years to phase out storage of coal and petroleum coke – a byproduct of oil refining, also known as “petcoke” – at the Levin-Richmond terminal, located at the city’s port.

Though the ordinance won’t regulate transportation of coal throughout the city, it would effectively stop the roughly one million tons of coal that ships from the terminal each year.

The ordinance last came before the council Dec. 3, but no action was taken after hundreds of people poured into the council chambers to voice their opinions over the course of roughly five hours. But after the comments, Mayor Tom Butt exercised his mayoral prerogative to continue the item until Jan. 14.

Though the battle over coal storage is set to resume Tuesday, the item is noted by agenda documents to be for council deliberation only.

The comments made during the Dec. 3 meeting captured a fierce battle over the presence of coal in Richmond, which has raged for much of the past year. The city directed staff to study the ban beginning in December 2018. The following April the city directed the planning commission to review the amendments.

But the planning commission recommended the city not adopt the ordinance, saying the impact of coal and petcoke required more study.

Particulate pollution, or dust, from coal and petcoke can harm lung and heart health, according to the Environmental Protection Agency.

Those who spoke in support of the ban at the Dec. 3 meeting stressed this point while wearing shirts illustrated with a coal-bearing train that read “No coal in Richmond,” and held red signs that read: “Protect our health!!”

Several doctors spoke in support of the ban. Amanda Millstein, a doctor at UCSF Benioff Children’s Hospital, said more than fifty percent of her patients have asthma.

“I see that their lungs are really, really suffering, and that they particularly are sensitive to the poor air quality that we have here,” she said.

Several who spoke against the ban carried signs that read: “Are our jobs too dirty for you?,” “#BlueCollarRevolution,” and “#DirtyJobs.” Many urged the council to wait for further study on the issue, as the planning commission had recommended.

Jim Holland, vice president of Levin-Richmond , urged the council to wait for more study before moving forward with the ban because it would “likely put us out of business.” He cited a study commissioned by Levin-Richmond that found there was no economic alternative to coal and petcoke, meaning the 62 Levin-Richmond employees, including himself, would likely lose their jobs.

“If the city proceeds to adopt this ordinance, Levin would have no choice but to seek litigation,” Holland said.

Ada Recinos said she and others would happily stand with those who stood to lose jobs and demand Levin change its business practices. She said she would help find those workers opportunities to get jobs of the future, not ones stuck in the past.

“The reality is right in front of us, and I think you’ve been presented with a wonderful opportunity to take us into the future,” Recinos said.

Ben Eichenberg, an attorney for San Francisco Baykeeper, criticized the calls for further study. He said he hadn’t slept the last two nights because he’d been holding his asthmatic son, who was struggling to breathe. He said it was the most helpless feeling he’d felt in his life.

“Studies have shown the awful health impacts from coal dust, and statistics have shown how much Richmond is suffering,” Eichenberg said. “Calling for more study is nothing more than rearranging deck chairs on the Titanic.”

Tuesday’s meeting is scheduled to begin at 6:30 p.m. in the City Services Building, 440 Civic Center Plaza.