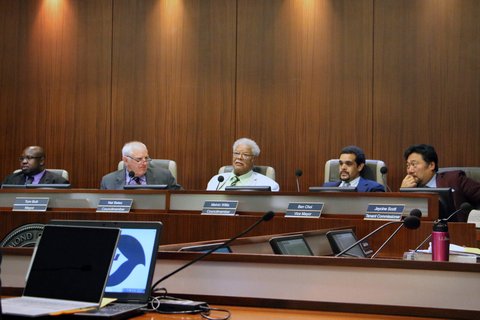 Posted at 03:26h in City Government by Pulse Editor 1 Comment

Wonderful Foundations was hoping to purchase the buildings, located at 1402 and 1450 Marina Way South, with revenue bonds issued by the California Public Finance Authority. Eugene Clark-Herrera, a lawyer representing the company, said the bonds would be exempt from federal and state income tax.

The council needed to approve the bonds before they could be issued, Clark-Herrera said, though another “applicable elected representative,” like the Contra Costa County Board of Supervisors, could also approve them.

The 5-1-1 vote — with Mayor Tom Butt against and Councilmember Nat Bates abstaining — means the financing of the project can’t be undertaken on a tax-exempt basis, Clark-Herrera said, and will therefore cost the purchaser more if the building is purchased with taxable bonds.

In December, the West Contra Costa Unified School District board denied a charter extension for John Henry High. This means the school will close if Amethod fails to win an appeal of the decision at the county or state level. Amethod is set to appeal the decision to the Contra Costa County Board of Education next week.

Some councilmembers said it wasn’t in the city’s best interest to allow Wonderful Foundation to purchase the building with a tax exemption. Councilmember Jael Myrick said they would want to make the decision with the city and its kids in mind, though it sounded like a wash either way.

Butt said there was no downside to the city for approving it, and Richmond’s real estate transfer tax would apply to the sale, netting the city an estimated $1.5 million.

“It’s not like we’re selling our souls for this,” he said. “It’s no-cost. It’s a freebie. We can’t control the current or future use of that site by voting on this or not voting on it.”

Myrick said if Wonderful Foundations decided to purchase the building anyway, the city would still receive money from the real estate transfer tax.
Public commenters on the item unanimously spoke out against charter schools.

Ritchie Cook, a former WCCUSD teacher, criticized charter schools for both how they approach education and their lack of programs that traditional public schools have, like drama, band, and orchestra.

Don Gosney said WCCUSD purchased a similar building nearby for $5.3 million about five years ago. He said he wondered why the Wonderful Foundation needed $64 million to purchase these two buildings, even though they’re larger. Gosney also said he wondered if the Wonderful Foundation could lease the building at a profit should Amethod, the tenant of the building, relocate or go out of business.

Clark-Herrera suggested the council wait to vote until after the John Henry High appeal next week. Butt said they could, but it wouldn’t change anything.

“Ultimately, we the taxpayers are paying the rent for these schools. We’re required to by law,” he said. “Regardless of what we do, it’s still going to be a great investment for somebody.”