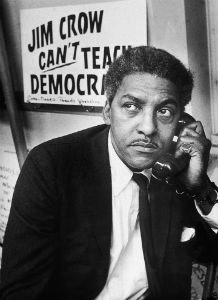 Posted at 18:49h in History, People by Pulse Editor 0 Comments

On Feb. 5, Gov. Gavin Newsom announced that his office granted a posthumous pardon to civil rights activist Bayard Rustin, who was an ally to national civil rights icon the Rev. Martin Luther King, Jr.; an influential strategist during the 1960s civil rights movement; and a key architect of the March on Washington in 1963.

Ten years before that in 1953, police officers arrested Rustin, who was openly gay, in Pasadena, Calif., on what was then called “a morals charge” for having consensual sex with another man.

Under California’s penal code, the crime was considered a vagrancy misdemeanor offense.

“In California and across the country, many laws have been used as legal tools of oppression, and to stigmatize and punish LGBTQ people and communities and warn others what harm could await them for living authentically,” said Gov. Newsom. “I thank those who advocated for Bayard Rustin’s pardon, and I want to encourage others in similar situations to seek a pardon to right this egregious wrong.”

That same day last week, the governor announced a broader clemency initiative to pardon people who were prosecuted in California for being gay.

“On behalf of the Black Caucus, I want to thank the Governor for granting this posthumous pardon. The Arc of Justice is long, but it took nearly 70 years for Bayard Rustin to have his legacy in the Civil Rights movement uncompromised by this incident,” said Assemblymember Shirley N. Weber (D-San Diego), chair of the California Legislative Black Caucus.

Rustin was a great American who was both gay and Black at a time when the sheer fact of being either or both could land you in jail,” Weber added.

The Legislative Black Caucus and the LGBTQ Caucus joined forces to urge the governor to pardon Rustin.

“These actions are consistent with the Governor’s deep and longstanding support for the LGBT community,” said Senator Scott Wiener (D-San Francisco), Chair of the California Legislative LGBTQ Caucus, after Gov. Newsom made the announcement.

Rustin, who was born in West Chester, Pa., also worked closely with King to organize the Montgomery Bus Boycott in Alabama.

In 2013, President Barack Obama posthumously awarded Rustin the Presidential Medal of Freedom, the highest civilian honor in the United States.