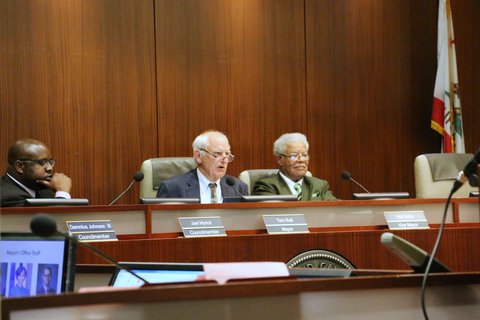 The Richmond City Council voted Tuesday to send a letter to the agency that oversees air quality in the Bay Area that requests it releases reports on the causes of oil refinery flaring in a timely manner.

The letter was sent at the behest of Communities for a Better Environment (CBE), an environmental justice organization that presented on the importance of the public having access to information on flaring.

Tyler Earl, an attorney from the group, said the Bay Area Air Quality Management District (BAAQMD) had been slow to respond to their public records requests for Chevron causal reports after flaring incidents. These reports are important for the public to have access to, CBE researcher Dan Sakaguchi said, because flaring is a hazardous process that’s often a symptom of something more dangerous and incidents at the Chevron refinery have increased in the past year.

Earl said in one instance they had to wait an additional two months after an already lengthy process — 60 days after the incident occurred — before the agency provided the report.

“The public deserves to know why Chevron is flaring and what the underlying risk to them is,” Sakaguch said. “This is a problem the district can fix now.” 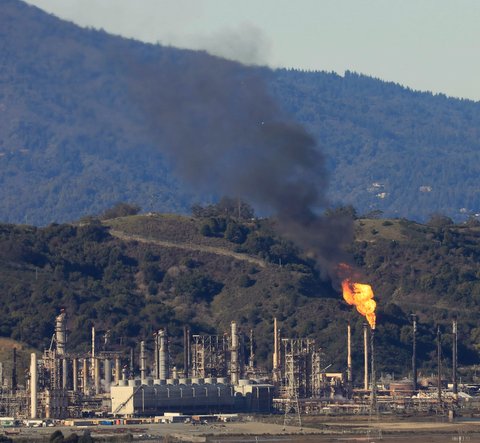 Flaring, which appears as a flame atop a smokestack, typically occurs when a refinery needs to burn off flammable gas during the over-pressuring of equipment. Flaring contributes to worsened air, said Zolboo Namkhaidorj, a youth organizer for CBE, as it releases thousands of pounds of toxic chemicals.

Because flaring is only permitted as an emergency device, according to CBE senior scientist Greg Karras, the reasons for the flaring can be connected to issues that lead to worse disasters.

“Our communities are rightly concerned about the huge increase of flaring over the past year,” Namkhaidorj said.

Wayne Kino, the deputy air pollution control officer for the air agency, said there were a number of causes behind the uptick in flaring at the Chevron refinery. He said about 75 percent of the flaring events last year were due to a hydrogen plant that started operating in fall 2018, according to reporting from KQED.

Kino also said he’d misunderstood the public records request from CBE and thought they’d had access to the information they needed online. He defended the practice of giving refineries 60 days after the month the incident occured to file a report, as that was sufficient time for them to find the root cause.

Councilmember Eduardo Martinez suggested the air district approach the information like breaking news, releasing updates as it learns more. He said he thought that kind of transparency would help ease concerns of those who live near the refinery.

Mayor Tom Butt said the real concern was whether the flaring is consistent with best practices or whether it represents something less than that.

“I think what really concerns me is the volume of flaring we’ve had in the last year,” Butt said

Sarah Steele, a former BAAQMD employee who blew the whistle on the agency last year, spoke during public comment. She said in her role overseeing the digitizing of agency documents, she’d found unopened flare reports being tossed in dumpsters. Steele argued the agency had no reason to withhold the notes of violation from the public.