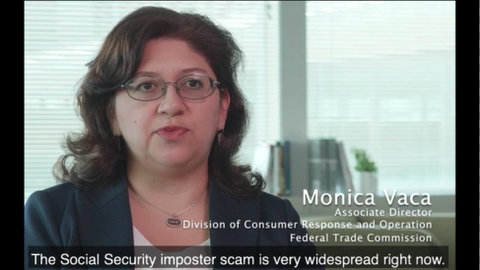 02 Mar FTC Says Everyone Needs to be Alert for Scams

Posted at 19:52h in National, News by Pulse Editor 0 Comments

Above: Monica Vaca, associate director of the Federal Trade Commission’s Consumer Sentinel Network, seen in one of many informative videos the agency posts at https://www.FTC.gov (https://www.ftc.gov/news-events/audio-video), warning of how various illegal scams in the United States cost victims almost $2 billion in 2019 and of steps people should take to avoid them. Image courtesy of the Federal Trade Commission

Anyone, anywhere can find themselves victimized by a scam, a representative of the Federal Trade Commission (FTC) said Thursday.

“People in every age group and every walk of life fall for scams,” FTC attorney Monica Vaca said.

Vaca’s comments came during a wide-ranging teleconference, sponsored by Ethnic Media Services, with journalists about consumer fraud. It included a long list of eye-popping statistics from 2019 about the prevalence and types of scams reported to the FTC.

The most reported scam last year was what Vaca labelled “imposter scams.”

Imposter scams include the all-too-common phone calls from persons purporting to represent someone in the federal Social Security system. They often warn there is a problem with a person’s Social Security account. These callers sometimes will ask a person to verify their Social Security number and/or warn that their benefits are in jeopardy.

“There has been a dramatic growth last year in government imposter scams,” Vaca reported. In previous years, similar scammers claimed to be calling from the IRS.

Romance scams sometimes at first include use of online dating services to gain people’s trust, then request money for help. Sometimes the scammer asks for small amount of money for things like paying for a cell phone card. And like many scams, Vaca said, romance scammers frequently ask people for money via gift cards. More sophisticated schemes can include requests to transfer bank funds.

“Right around Valentine’s Day, we try to get a warning out,” she said.

Vaca also said fake and counterfeit checks were high on the FTC list of scams, with a median loss of about $2,000 per victim.

The scam usually involved someone asking that some portion of the money — which has arrived in the mail as a check to the victim — be paid to a third party as some kind of fee.

The largest number of victims to fall prey to this type of scam are people in their 20s and are tied to some kind of income possibility, Vaca said.

The majority of scams hitting the public come via the telephone. Vaca says that if caller sounds like they’re part of a scam, simply hang up on them.

Suspected fraud or scams can be reported to the FTC via FTC.gov. You can file a complaint under the “Take Action” section.