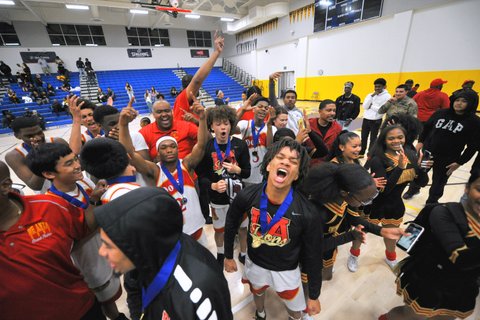 Posted at 21:38h in Sports by Pulse Editor 0 Comments

The last NCS title for De Anza was a Division III title in 1989, and, in recent history, this is the first team to get past the first round of the NCS.

“This is for all the underdogs, all the public schools that play in leagues with private schools, all the kids that don’t get to play AAU [Amateur Athletic Union] and don’t get the same opportunities as other players,” De Anza head coach Reginald Figgs said.

Daniel Fagan, alongside guards Jason Hudson and Josiah Vaughn, have played for De Anza since their freshman year in 2016.

“They helped set a foundation when I got here four years ago,” Figgs said.

In that time, Fagan said he, Hudson, and Vaughn have developed a “for the team” mentality that got them to the top of their section.

“Over the four years, coach has taught me to play as a team and I am extremely happy I have,” he said.

That tightknit chemistry on the court showed in games because De Anza only has seven players that play throughout the game.

“You definitely get tired, but when you have a passion to win, you ignore that you are tired and get the dub,” Fagan said.

In the third quarter of the NCS DII finals, Alameda took the lead from De Anza, as fatigue settled in, Fagan said.

With 20 seconds to go in the third quarter, Alameda had a throw-in possession at De Anza’s end of the court as they led De Anza 37-40.

As the play developed, Alameda guard Jason Cibull drove into the paint from the top center of the court as Hudson put on the pressure. Cibull was able to dribble past Hudson and went for a layup, but was heavily guarded by De Anza shooting guard Anton Williams. Cibull hit the rim.

Fagan, who was positioned outside the paint, immediately signaled for a pass, turned around and sprinted down the court. Batchan passed it to Fagan, who hit a buzzer beater layup amid pressure from Alameda center Elijah Caliz to get De Anza up to 39.

“We just took a couple deep breaths, didn’t listen to the crowd and came back,” Batchan said.

Throughout the game, Alameda’s crowd overtook Pinole’s gym and roared when their team scored, drowning out De Anza’s supporters.

But with a boost of morale at the end of the third quarter, Batchan and his teammates came into the fourth quarter with a “dog mentality.”

With five minutes left in the eight-minute quarter, Batchan hit in a three-pointer. The next play, Williams blocked a layup attempt, grabbed the ball and passed it to Batchan, who ran up the court and scored for two.

Batchan ended the game with 22 points, leading his team in scoring. Fagan finished with 15 points.

“Being from Richmond, we always have to prove something,” Batchan said. “We play with a chip on our shoulders and win.” 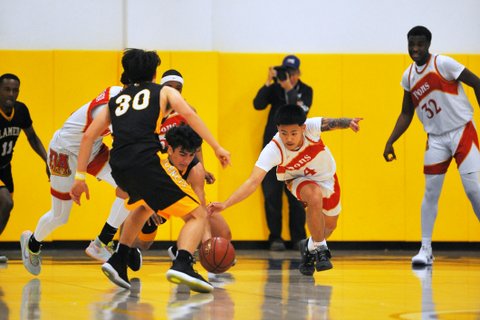