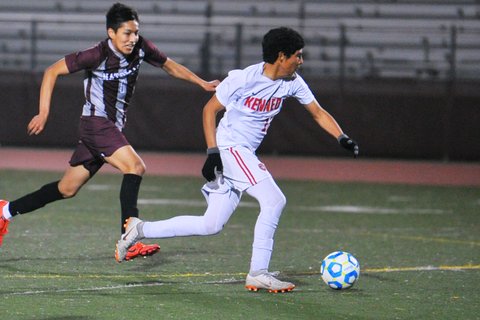 Posted at 17:47h in Sports by Pulse Editor 1 Comment

No loss is easy to take, but the Kennedy High soccer team accepted their 3-2 defeat against Natomas High of Sacramento on March 7 with pride.

“We played a great season and we made history, so let’s go Eagles,” he said.

Kennedy came into the 8-team state tournament ranked last. To get to the finals, they had to first get through the top-seeded Summit Preparatory Charter High School.

Kennedy won 2-0, upsetting Summit Preparatory in Richmond and advanced to face No. 4 El Dorado High. Kennedy dominated the game, and destroyed El Dorado 5-0 in Placerville, securing their place in the finals.

Although Kennedy wasn’t able to get the win in the championship game against Natomas, Alvarado says the team still made history.

Kennedy started off strong in the CIF regional finals when forward Angel Gomez scored the first goal. It came in the 20th minute off a rebound inside the box after an indirect free kick was called.

Natomas’ momentum continued to build and in the 25th minute when midfielder Fabian Trujillo scored, they took the lead.

Kennedy, not satisfied with going into the half losing, tied the game with a goal by midfielder Estuardo Ramos in the 30th minute, ending the first half tied 2-2.

“Our players matched up with theirs,” Kennedy head coach Harry Campbell said.

Kennedy was able to read Natomas’ plays and vice-versa. As a result, both teams struggled to score in the second half, Campbell said.

It was Natomas midfielder Angel Ortiz who found an open space in the Kennedy defense when he received a ball inside the Kennedy goal box and curved it into the net. He scored the game-winning goal in the 18th minute of the second half.

Kennedy was unable to respond.

Meanwhile, Natomas fans roared and dominated the atmosphere in favor of their home team.

After the three minutes of stoppage time was called, a scuffle between Natomas and Kennedy players broke out near the Kennedy goal box. Players on both sides pushed each other and their coaches ran onto the field.

The game was called and Natomas’ players and fans erupted in cheer.

Guitterez said Kennedy players let the Natomas home crowd get in their heads and the team succumbed to frustration on the field.

After the final whistle, Campbell regrouped his players and told them to forget their negative emotions, show respect, and line up to shake hands with the Natomas players.

Guitterez was not satisfied with the loss, but as the final whistle blew, there was nothing more he could do than to find solace in the positive things he and his team accomplished this season.

“We did the best that we could, and I hope Richmond is proud of us,” he said. 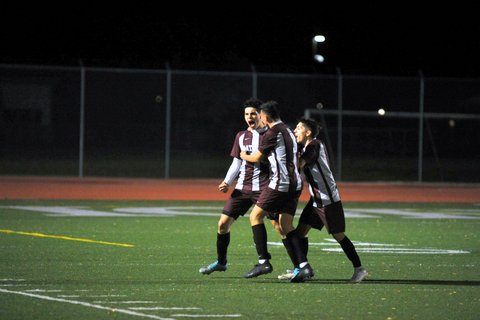