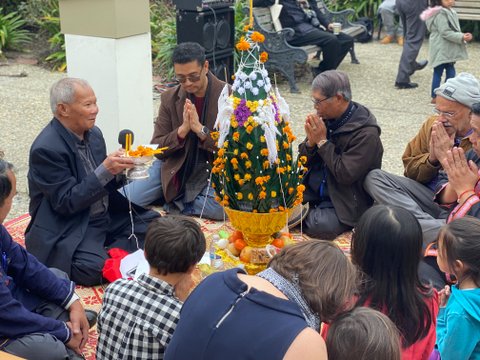 Posted at 19:54h in Arts and Culture, History by Pulse Editor 0 Comments

The stories of Laotian refugees that fled their home country after the Vietnam War and settled in the United States are being told through an exhibit now at the Richmond Museum of History and Culture.

The “Between Two Worlds: Untold Stories of Refugees from Laos” exhibit, on display until May 29, uses photos, documents, cultural artifacts, and first-person narratives to tell the stories of the refugees in their own words.

The exhibit aims to trace the footstep of the refugees through four stages of home: first their homes in Laos, then to reeducation camps, to refugee camps, and finally to new homes in the U.S.

“We’re excited because this is the first time that City of Richmond will be hosting a traveling exhibit that focuses on the refugees from the country of Laos,” Vinya Sysamouth, executive director of Center for Lao Studies, said at opening reception for Between Two Worlds on March 1.

Sysamouth said the exhibit focuses on two ethnic groups from Laos — the Khmu, a highland ethnic group, and the lowland Lao — and four different stages in their journey.

The first room, Sysamouth said, is a typical Lao kitchen with a fireplace and steamed rice.

The second is a reeducation camp, or what happened after Laos fell into communism. That’s where some who sided with the U.S. were sent to hard labor and where many people died from starvation and disease.

The third room represents life in the refugee camps where many people lived for a year or two before immigrating to another country, such as the United States or France.

The fourth and final room represents a typical living room in the United States during the late ‘70s and early ‘80s.

Richmond and West Contra Costa County are home to thousands of Laotian war refugees who arrived in the U.S. starting in 1975 and continued into the 1990s.

Torm Nompraseur, who spoke at the reception, said his family was the first Laotian family to settle in Contra Costa County when he arrived in Richmond on Dec. 1, 1975.

Census data from 2010 shows that nearly 10,000 Laotians currently live in the Bay Area.

The Center for Lao Studies put together the exhibit with a team of historians, graphic designers, writers and others who spent more than a year researching and planning.

“We have a huge Laotian population here in Richmond and we are proud to present the history of how they got here and their life stories,” Sysamouth said, “just so that we are able to connect with other community members and learn about each other.”

IF YOU GO: Between Two Worlds: Untold Stories of Refugees from Laos closes Friday, May 29. The Richmond Museum of History, 400 Nevin Ave., is open from 1 to 4 p.m.Wednesday through Sunday. Admission is $5 for adults, $3 for seniors/students over 12. Kids under 12 are free.