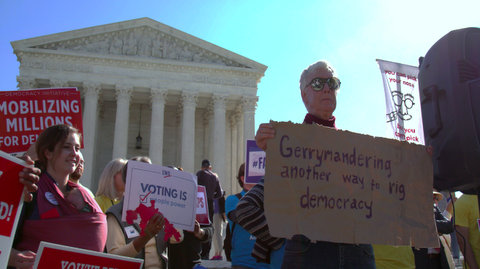 18 Mar Review: ‘Slay the Dragon,’ Highlights the Fight for Democracy

Posted at 02:07h in Arts and Culture, Politics by Pulse Editor 0 Comments

Slay the Dragon is destined to be a film that changes history.

In a powerful, clear and well-documented hour and 40 minutes, the documentary explains why nearly all state legislatures in the U.S. are tightly controlled by ultra-conservatives, despite state voters usually wanting reasonable laws, not the off-the-wall legislation that is routinely put forth and often approved.

The film also makes a strong case that the results of the 2020 U.S. Census will be critical to restoring democracy.

Slay the Dragon has all the elements of a political thriller: conniving politicians, bushels of corporate campaign money, dirty election strategies, a corrupt judicial system, and a phalanx of citizen heroes.

It’s those citizen heroes that make this film so important right now. They’re inspiring, perhaps inspiring enough to get complacent citizens off their film-viewing couches to become politically involved at all levels.

Slay the Dragon dives deep into an age-old political process called “gerrymandering,” which a well-funded, nationwide Republican effort has used for nearly a decade.

By carefully manipulating the lines on voting maps to create GOP-stronghold voting districts, GOP operatives have been able to make it so GOP candidates win easily and Democratic candidates always lose. The gerrymandering packs voting districts to sway the results.

Whoever controls drawing those voting district lines can assure political control for a decade because district lines are redrawn every 10 years — after the U.S. Census.

The film’s careful explanations about the devious takeovers of so many statehouses across the country help to explain how Donald Trump slid into the White House despite garnering fewer votes than Hillary Clinton.

Slay the Dragon premiered last year at the Tribeca Film Festival and will be available to the public April 3 on VOD and digital platforms.

It is really a must-see movie.